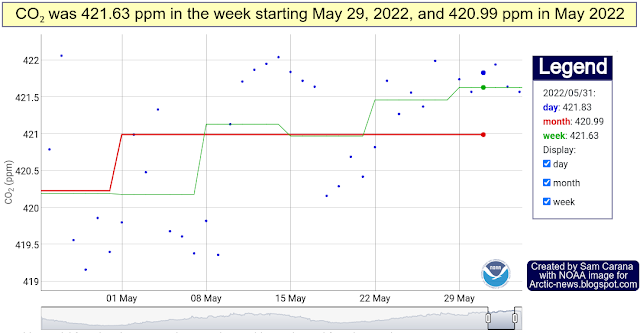 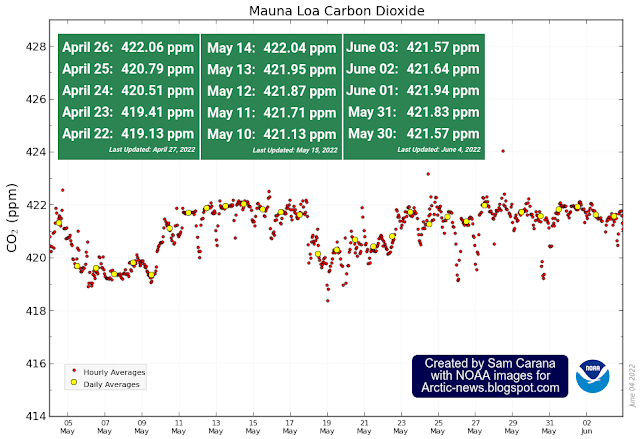 The image below shows carbon dioxide concentration rising over the past few years, with surface flask measurements well above 422 ppm at Mauna Loa recently. 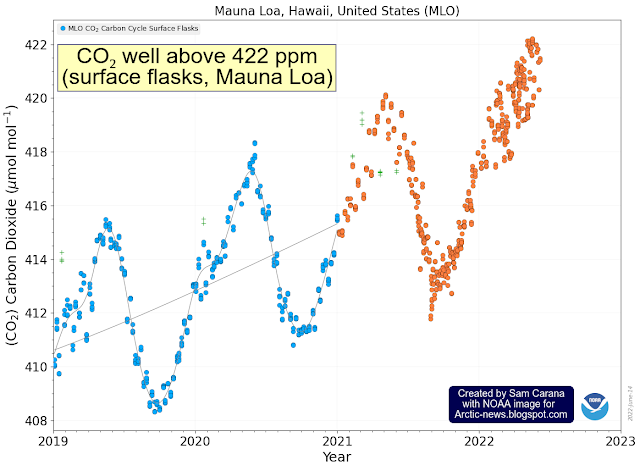 Carbon dioxide concentration is even higher over the Arctic. The image below shows carbon dioxide approaching 430 ppm at Barrow, Alaska. 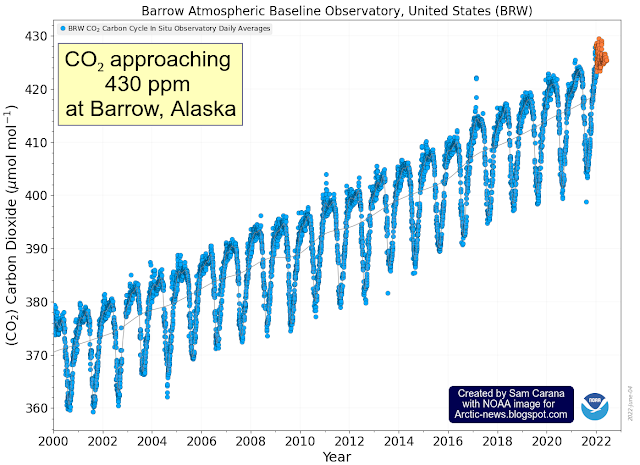 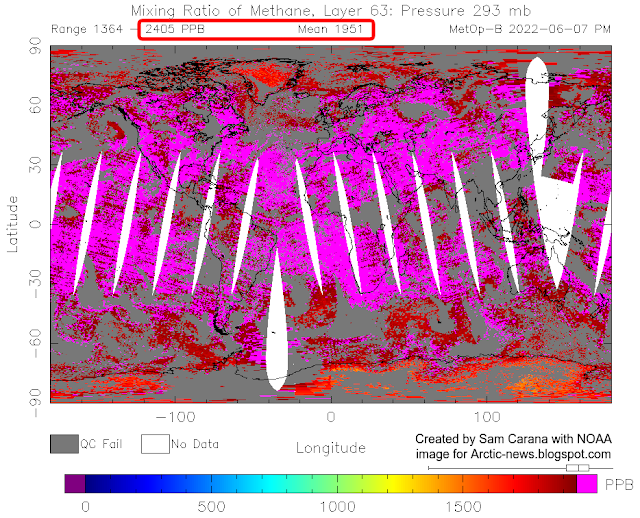 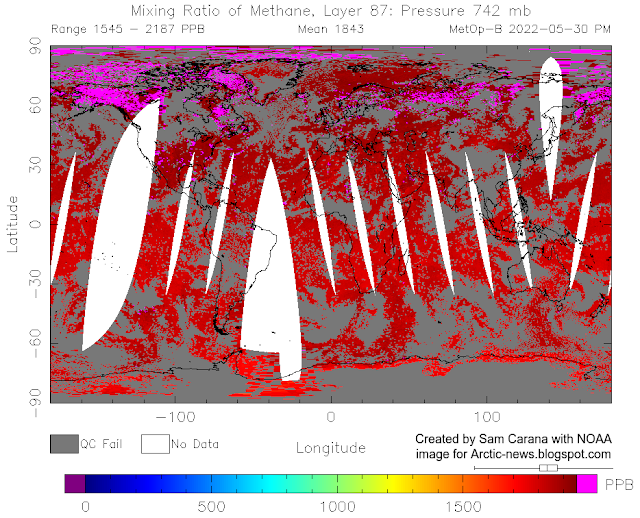 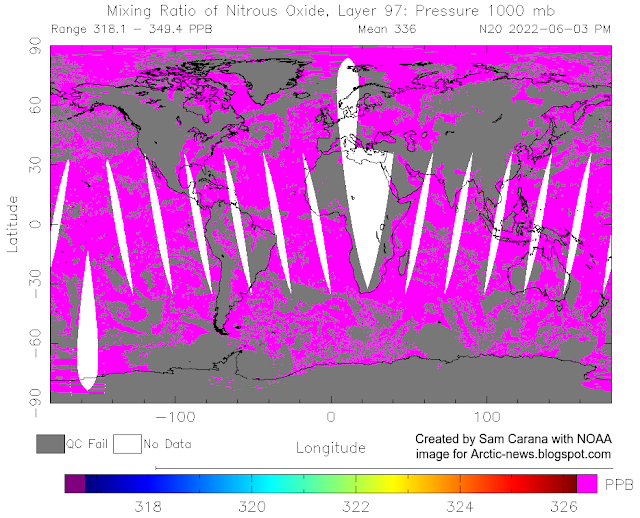 Greenhouse gas levels are very high and there are many further indications that a huge temperature rise could take place over the next few years.
Cataclysmic alignment of El Niño and sunspots 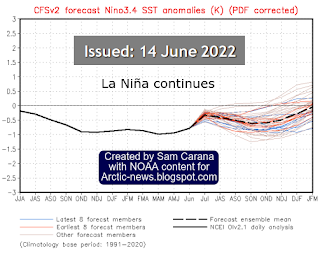 The trigger for such a huge rise could be a cataclysmic alignment of the upcoming El Niño with a high number of sunspots, which look set to reach maximum impact around July 2025.

We are currently in the depths of a persistent La Niña, as illustrated by the image on the right, adapted from NOAA. This suppresses the temperature rise.

El Niños typically occur every 3 to 5 years, according to NOAA and as also illustrated by the NOAA image below, so the upcoming El Niño can be expected to occur soon.

The above NOAA image indicates that going from the bottom of a La Niña to the peak of an El Niño could make a difference of more than half a degree Celsius (0.5°C or 0.9°F). 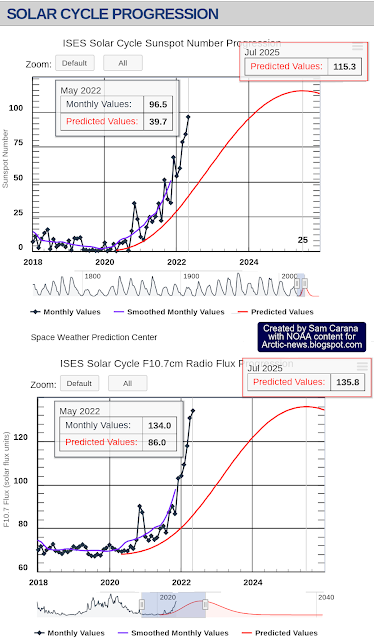 A huge temperature rise looks set to unfold soon, first of all in the Arctic, triggered by the combined impact of an upcoming El Niño and a peak in sunspots.
Sunspots are currently well above what NOAA predicted, as illustrated by the image on the right, adapted from NOAA.
The more sunspot, the more the temperature goes up. The rise in sunspots from May 2020 to July 2025 could make a difference of some 0.15°C (0.27°F).

The next El Niño looks set to line up with a high peak in sunspots, in a cataclysmic alignment that could push up the temperature enough to cause dramatic sea ice loss in the Arctic, resulting in runaway temperature rise by 2026.

A huge temperature rise in the Arctic

There are many further indications that we're on the brink of a huge temperature rise in the Arctic.


Ocean heat that enters the Arctic Ocean from the Atlantic Ocean and the Pacific Ocean keeps rising.
As a result, several tipping points threaten to be crossed in the Arctic soon, as described in an earlier post, including the latent heat tipping point and a Blue Ocean Event (starting when Arctic sea ice extent will fall below 1 million km²), which would further speed up the temperature rise in the Arctic.
As temperatures keep rising in the Arctic, changes to the Jet Stream look set to intensify, resulting in loss of terrestrial albedo in the Arctic that could equal the albedo loss resulting from sea ice decline.
Further feedbacks include permafrost degradation, both terrestrial and on the seafloor of the Arctic Ocean, which looks set to cause huge releases of greenhouse gases (particularly CO₂, CH₄ and N₂O).
This would in turn also cause more water vapor to enter the atmosphere, further speeding up the temperature rise, especially in the Arctic, where vast amounts of methane are contained in sediments at the seafloor and where there is very little hydroxyl in the air to break down the methane.

Conversely, there could be a temperature rise due to releases of other aerosols that have a net warming impact, such as black and brown carbon, which can increase dramatically as more wood burning, forest fires and urban fires take place, which again would hit the Arctic hard by darkening the surface as they settle on the snow and ice cover, thus speeding up its decline.

Furthermore, the combined impact of aerosols and nitrogen fertilizers has been underestimated; a recent study concludes that when ammonia, nitric acid and sulfuric acid are present together, they contribute strongly to the formation of cirrus clouds.
Global temperature rise
As the temperature keeps rising, further self-reinforcing feedbacks will kick in with more ferocity such as an increase in water vapor globally combined with a decrease in lower clouds decks, further increasing the temperature, as described at the clouds feedback page.
Altogether, the global temperature could rise by more than 18°C above pre-industrial, as illustrated by the image further above on the right, and as also discussed at the Extinction page.
Human extinction by 2025?
An April 2022 analysis found that the temperature rise from pre-industrial to March 2022 could be as much as 2.35°C. When adding 0.65°C for the joint impact of the upcoming El Niño and a peak in sunspots, the rise could be as much as 3°C by 2025, as also depicted in the image on the right, from that same analysis.
A 2018 study (by Strona & Bradshaw) indicates that most life on Earth will disappear with a 5°C rise. Humans, who depend for their survival on many other species, will likely go extinct with a 3°C rise, as illustrated by the image below, from an earlier post.

Rise beyond 2026
As said, a temperature rise of 3°C from pre-industrial could be reached by 2025 just due to the combined push of the upcoming El Niño and a peak in sunspots, i.e. without change in other forcers.

What would happen if just methane kept rising, i.e. without change in other forcers? The image below shows methane with a trend added that points at a rise that could represent a forcing of 780 ppm CO₂e in 2028, which means that the clouds tipping point at 1200 ppm CO₂e would be crossed by methane and carbon dioxide alone (assuming no change in other forcers and with carbon dioxide remaining at 421 ppm), which would cause an additional 8°C rise in temperature.

The above image shows that such a trend is contained in existing methane data. When also adding a large eruption of methane from the seafloor of the Arctic Ocean, the situation would be even worse, further underlining the potential for a rise of more than 18°C by 2026.
Conclusion

In conclusion, temperatures could rise strongly soon, driving humans extinct as early as in 2025, while temperatures could skyrocket in 2026, making it in many respects rather futile to speculate about what will happen beyond 2026. At the same time, the right thing to do now is to help avoid the worst things from happening, through comprehensive and effective action as described in the Climate Plan.

In the video below, Jennifer Hynes and Sandy Schoelles discuss the situation.

• Co-extinctions annihilate planetary life during extreme environmental change - by Giovanni Strona and Corey Bradshaw (2018)
https://www.nature.com/articles/s41598-018-35068-1
• When Will We Die?
https://arctic-news.blogspot.com/2019/06/when-will-we-die.html