The Importance of Methane in Climate Change

The Climate Plan (by Sam Carana) tackles methane on multiple lines of action
To combat the catastrophic rise in greenhouse gas levels, fossil fuel needs to be phased out as quickly as possible, through a rapid transition to clean renewable energy, batteries, and green hydrogen and green ammonia. Additional efforts are needed to combat the catastrophic rise in greenhouse gas levels and temperatures, especially over the Arctic, the more so since the aerosol masking effect will fall away in the transition. It is therefore critical to also explore methods such as marine cloud brightening and to reduce methane levels, which can make a huge difference and which can additionally be achieved through changes in food production, in urban design and in forests & waste management.

Much can be achieved by two sets of feebates. The Climate Plan prefers local implementation, with communities deciding what works best locally, provided each community does take sufficient action to achieve the necessary dramatic reductions in each type of pollution. Examples of implementation are depicted in the image below.

Methane's GWP based on IPCC AR5 data (horizon in years)
The image on the right shows the global warming potential (GWP) for a number of climate forcers. The image shows that, with a GWP over 10 years time, global release of methane from all anthropogenic sources exceeds all anthropogenic carbon dioxide emissions as agents of global warming.
Since methane's lifetime is 11.8 years, a pulse of methane has much more impact over the first few years after its release than 100 years later. Given the urgency to act on climate change, it makes sense to use a GWP over 10 years time, which was 104.2 according to IPCC AR5.

Based on these IPCC AR5 values, a pulse of methane has a GWP of more than 150 over the first few years after release. In case of methane concentration, however, the methane doesn't go away after a decade or so, in fact, methane concentration has been rising at accelerating pace over the last few years.
In the year when AR5 was released (2014), a letter was signed by the world's leading climate scientists urging the Obama administration to use a GWP for methane over a short timescale, in order to better facilitate urgently-needed short-term action. 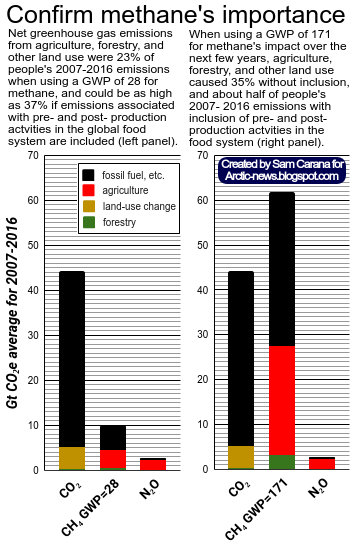 Subsequently, a 2016 analysis found methane's 100-year GWP to be 14% higher than the IPCC value in AR5.
Yet, the IPCC in its 2019 special report Climate Change and Land, kept using a GWP for methane of 28 over 100 years, calculating that AFOLU (agriculture, forestry, and other land use), including emissions associated with pre- and post-production activities in the global food system, caused 37% of people's 2007-2016 greenhouse gas emissions.
By contrast, when updating methane's GWP of 150 over a few years with 14% to 171, the proportion would rise from 37% to about half of people's 2007-2016 emissions, as illustrated by the image on the right.
This higher GWP makes the more sense because action over the next few years is critical, making it imperative to focus on methane's GWP over a very short timescale.
The image below shows a trendline that is based on IPCC AR5 data that were similarly updated by 14% and that indicates that methane's one-year GWP is 200.

The threat of a huge, abrupt methane eruption from the seafloor of the Arctic Ocean (ppb/ppm) 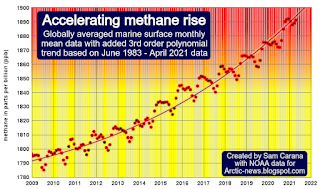 A trend based on the NOAA July 1983-April 2021 globally averaged marine surface monthly means shows that the rise in methane concentration is approaching 2 parts per million (ppm) at accelerating pace (image right).

The NOAA data are for global mean marine surface readings. At higher altitudes, even higher concentrations show up. The MetOp-1 satellite recorded a mean global methane level of 1956 ppb at 293 mb on September 2, 2021, am. 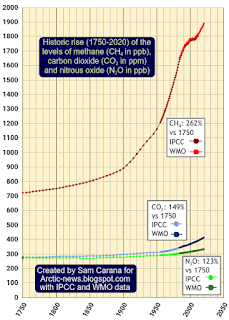 Unlike carbon dioxide, methane's GWP does rise as more of it is released. Given the threat of a huge, abrupt eruption of methane from the seafloor of the Arctic Ocean, a direct comparison between methane (CH₄) and carbon dioxide (CO₂) is in order.

Updating the IPCC AR5 methane 10-year GWP value of 104.2 with an extra 14% results in a GWP of 119. Accordingly, this WMO level of 1889 parts per billion (ppb) for methane in 2020 translates into a carbon dioxide equivalent (CO₂e) of 224 ppm.
It gets even worse for an abrupt eruption of methane from the seafloor of the Arctic Ocean. If such an eruption occurred instantly, a one-year GWP of 200 seems more appropriate.
Methane in carbon dioxide equivalent (CO₂e)
The image on the right shows a trend that is based on NOAA 2006-2020 annual global mean marine surface methane data and that shows how a mean of 3893 ppb could be exceeded by the end of 2026, i.e. more than 2 ppm higher than the WMO's 2020 level for methane.

A 5 Gt methane eruption would raise methane concentration by some 2 ppm. This alone would, at a 1-year GWP of 200, translate into an immediate 400 ppm CO₂e on top of the existing CO₂e.
How likely is such a large methane burst? Remember the warnings by Natalia Shakhova et al., who more than a decade ago concluded abrupt release of up to 50 Gt from the vast amounts of methane stored in the form of hydrates and free gas to be highly possible at any time.
A recent study found methane leaking from a large pool of deep, preformed methane, indicating a large potential for abrupt future releases.


Obviously, an extra 400 ppm CO₂e due to a burst of seafloor methane from the bottom of the Arctic Ocean of some 5 Gt would push up temperatures, especially in the Arctic, where there is very little hydroxyl in the air to break down the methane.
Rising temperatures in the Arctic would cause more sea ice to melt and permafrost to thaw, triggering further feedbacks that would kick in with ever greater ferocity and in turn further push up the total CO₂e. As an exmaple, decline of the sea and ice cover would come with albedo changes, while rising temperatures would come with increased evaporation and more water vapor in the air, and water vapor is a potent greenhouse gas.
When adding it all up, such a methane burst could be the catalyst to bring the total CO₂e level beyond 1200 ppm and thus trigger a further 8°C global temperature rise, due to the clouds feedback, as also discussed in this post.
How much could temperatures rise? (°C/°F)
As said, the clouds feedback could be triggered by an eruption of a seafloor methane burst, since such an event could come with further forcing, such as an immediate collapse in industrial activity and an associated fall in sulfate cooling, and with numerous additional feedbacks, and huge subsequent rises in greenhouse gas emissions, next to the temperature rise due to such a methane burst alone.
As illustrated by the bar on the right, there are many further elements that could dramatically push up the temperature over a short timespan, possibly within years.

Decline of Arctic snow and ice can result in huge albedo losses, loss of latent heat buffer, jet stream changes, more and more extreme weather events, and more. Slowing down of the Atlantic meridional overturning circulation (AMOC) and increasing ocean stratification can result in less heat getting transferred from the atmosphere to the depths of the ocean, as also described at this page.
Since more than 90% of the heat trapped by people's greenhouse gases now goes into oceans, if even a small part of this heat instead remains in the atmosphere, this would cause air temperatures to rise strongly.
Altogether, the total potential rise in global air temperature from pre-industrial could be more than 18°C by 2026. Keep in mind that humans will likely go extinct with a 3°C rise and most life on Earth will disappear with a 5°C rise.
Conclusion
In conclusion, the situation is dire and calls for the most comprehensive and effective action to be taken, without delay, as described at the Climate Plan.