As terrestrial adversaries keep pushing the Earth and its inhabitants to within seconds of a nuclear catastrophe, looming through heat waves, extreme fires and flood events is the huge calamity of irreversible global warming.

Carbon dioxide (CO₂) reached levels well above 420 parts per million (ppm) at Mauna Lao, Hawaii, on February 13 and 14, 2022, as illustrated by the image, from an earlier post. 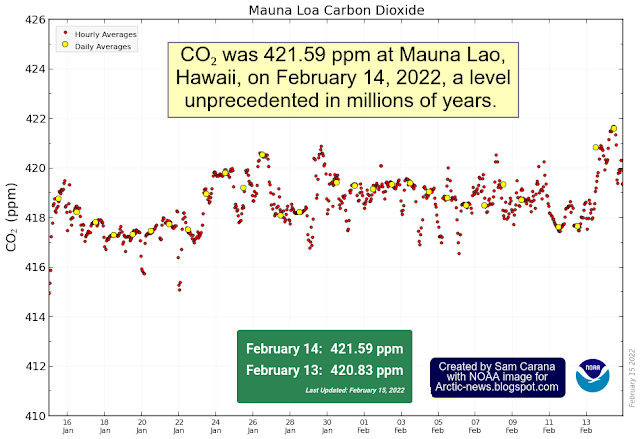 The image below, adapted from NOAA, shows CO₂ and other greenhouse gases such as methane (CH₄) and nitrous oxide (N₂O) rising from 280 ppm CO₂e in 1700 to 504 ppm CO₂e in 2021. This figure of 504 ppm CO₂e could be much higher when applying a short horizon to calculate methane's Global Warming Potential. 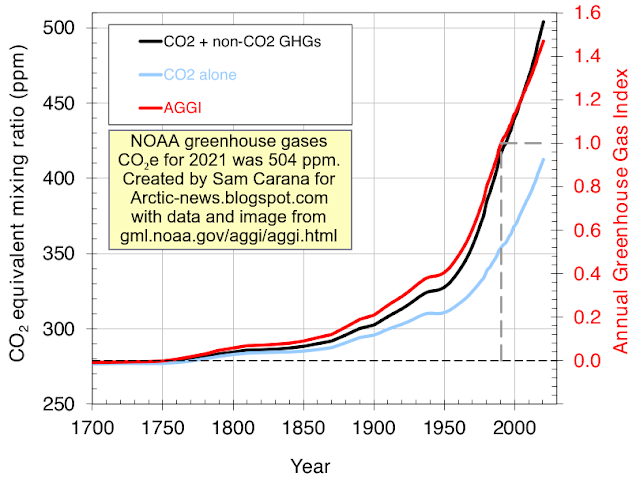 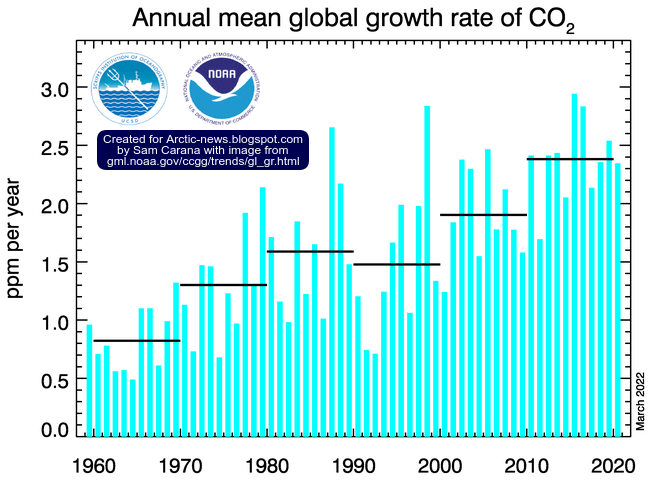 The rate of this CO₂ rise is unprecedented in the Cenozoic (since 65 Ma) record, with perhaps the closest parallel being the aftermath of the K-T dinosaur mass extinction event, when the temperature rose by as much as ~7.5°C. According to Beerling et al. (2002) CO₂ level rose from 350–500 ppm to at least 2,300 ppm within 10,000 years following the K-T impact, at an average rate of ~0.2 ppm/year, significantly less than today's rate. 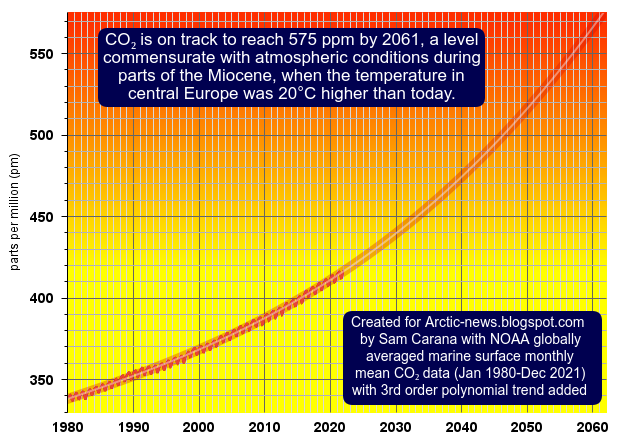 Above image shows CO₂ on track to reach 575 ppm by 2061, a level commensurate with atmospheric conditions during parts of the Miocene, when the temperature in central Europe was 20°C higher than today, as also illustrated by the image below, adapted from a 2020 study by Methner et al.

The image below further illustrates that to find CO₂ levels as high as 575 ppm, we have to go back in time millions of year, into the Miocene.

What makes current conditions even more dire is that it's not just carbon dioxide that is rising at a speed unprecedented in history, methane is rising at an even faster pace, as illustrated by the image below, from an earlier post. 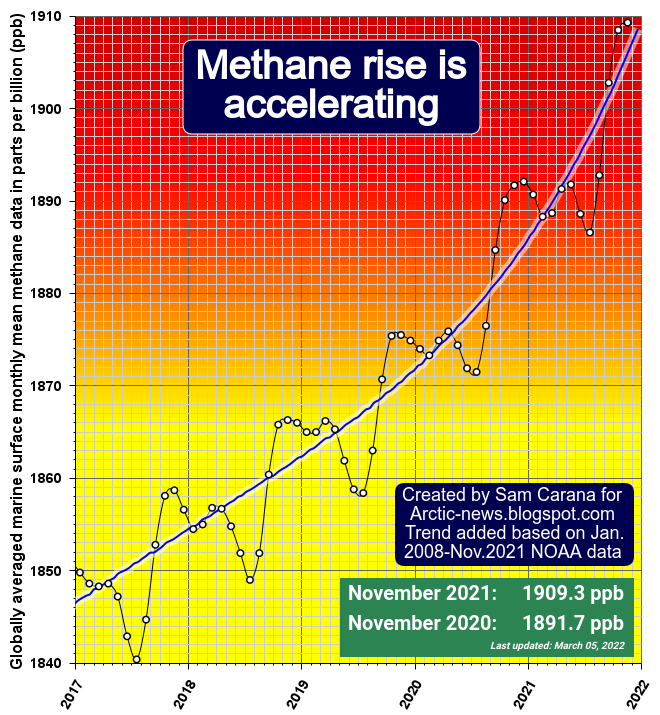 Can the current climate trend be arrested, or even reversed?

The current global greenhouse gas trend is leading to one of the largest mass extinctions of species in the geological record, one of the victims being human civilization. The current focus on emission reduction overlooks a major factor, namely the amplifying feedbacks from land and oceans (Steffen et al., 2018). There is a desperate need, in addition to emission reduction, for urgent large-scale sequestration of atmospheric greenhouse gases, and for further action to combat the temperature rise.

The role of amplifying GHG feedbacks from land and oceans, leading to enhanced heating, appears to be neglected in climate negotiations. Amplifying feedbacks include: Numerous species have been unable to survive the accelerated global heating following the K-T impact event, nor are many species likely to survive the even higher rate of the of the Anthropocene catastrophe. A connection between climate change and human wars is evident from the accelerated global warming in the wake of the industrial-scale world wars I and II and subsequent industrial developments. It is possible that climate change could have been arrested in the 1960s had global efforts been directed at the time for abrupt cuts in emissions, transformation of agricultural and land clearing practices, and effort at CO₂ drawdown/sequestration. By the onset of the 21st century however, such efforts have hardly been undertaken and could yet turn out to be too late. The repetitions of humanity’s old warlike habits, investing resources in industries of death, genocidal wars associated with intensive carbon emissions, forecast in “The Fate of the Earth”, yield little promise for a change of direction.

Signs of the rise to come

Arctic sea ice extent has fallen strongly over the past few weeks and looks set to keep falling rapidly over the next few months. 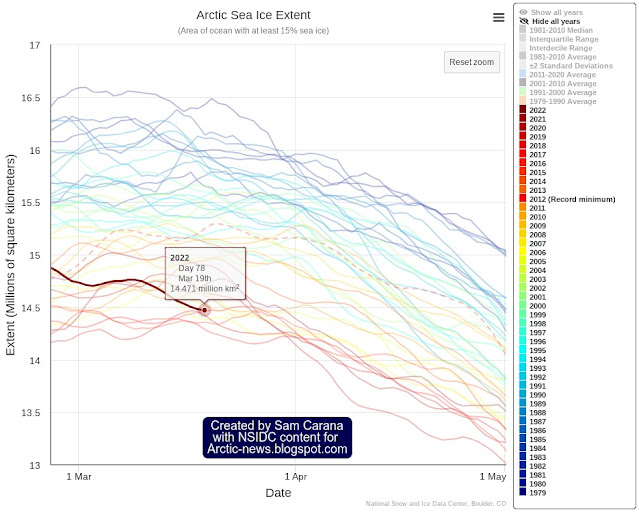 Ocean heat is at record levels, as illustrated by the image below and as discussed in an earlier post. 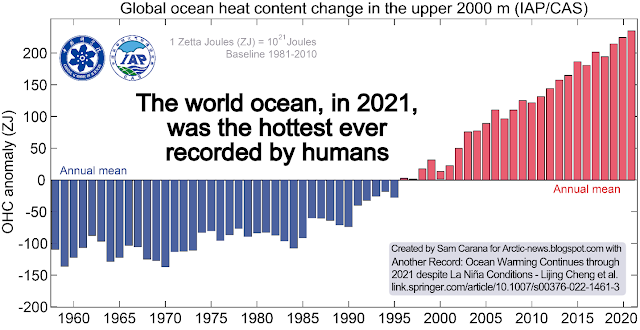 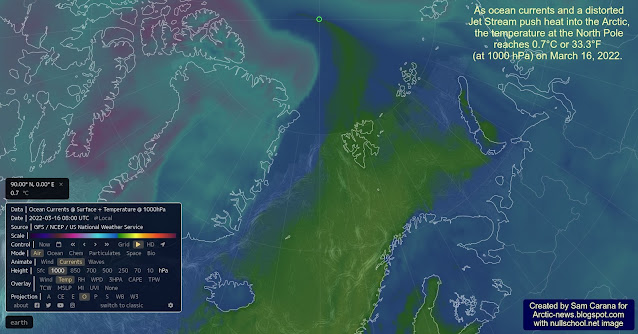 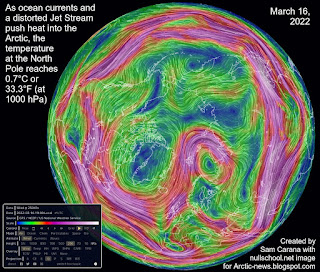 How could the temperature at the North Pole get this high, in March?
As said, ocean heat is at record levels. This is heating up the air over the Atlantic Ocean. At times, huge amounts of heat are getting pushed into the Arctic due to a distorted Jet Stream. The image on the right shows the Jet Stream on the Northern Hemisphere on March 16, 2022, with strong winds at 250 hPa pushing heat from the Atlantic Ocean into the Arctic.

Furthermore, the Gulf Stream is pushing huge amounts of ocean heat toward the Arctic.
The image below shows that sea surface temperatures were as much as 14.1°C or 25.3°F higher than 1981-2011 off the North American coast (green circle) on March 5, 2022. 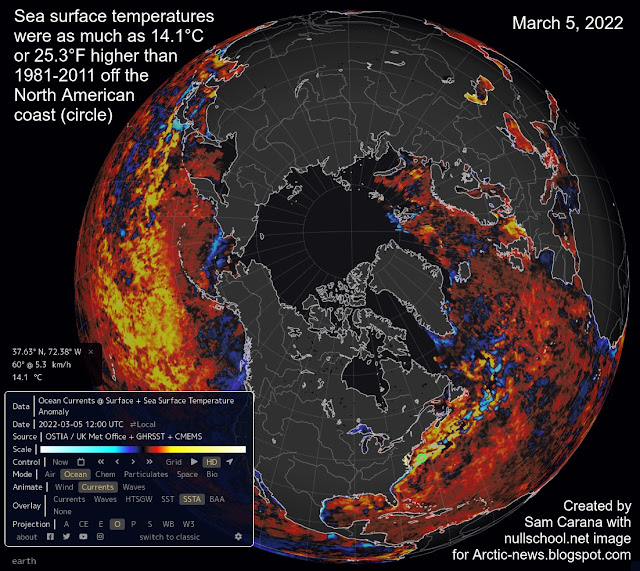 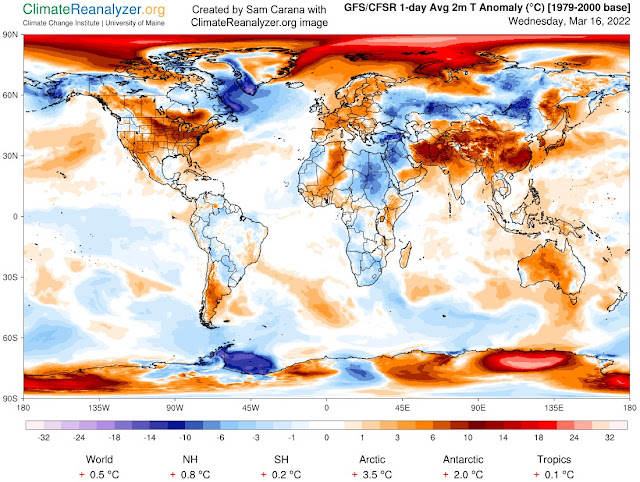 Below, a Climate Reanalyzer forecast for March 18, 2022, of very high temperature anomalies over Antarctica combined with a forecast of a diversion over Antarctica of the Southern Polar Jet Stream (wind at 250 hPa). 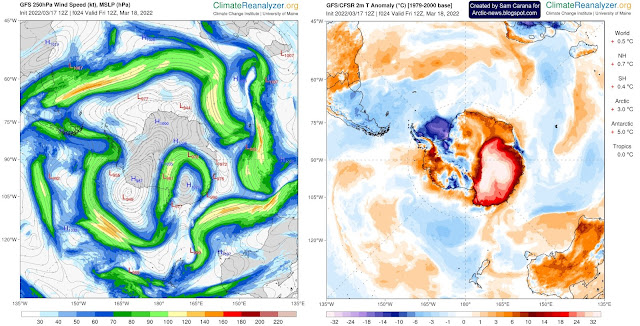 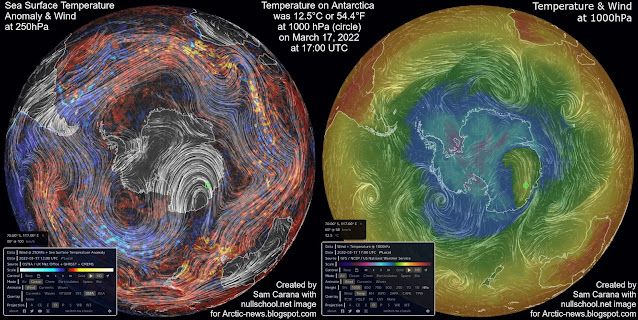 What causes such distortions of the Jet Stream?

• Emissions by people heat up the air, and heat up oceans and make winds stronger, as discussed in an earlier post.

• Another mechanism affecting the Jet Stream is that, as oceans heat up, the temperature difference between land and oceans widens both in Summer and in Winter and this can cause the Jet Stream to divert deeper from the narrow path it used to follow, as discussed in an earlier post.

• What especially affects the Jet Stream on the Northern Hemisphere is that, as the Arctic gets hit hard by temperature rises, the temperature difference narrows between the Arctic and the Equator, slowing the Jet Stream; this can prolong and amplify extreme weather events.
Signs of the things to come
The above events could be seen as signs of the strength and the speed of the rise to come.


Rise due to La Niña and high sunspots
The image below indicates that the global temperature difference between the top of an El Niño and the bottom of a La Niña period could be more than half a degree Celsius. 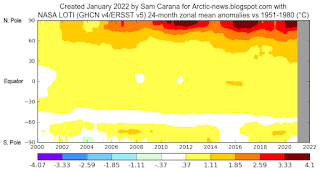 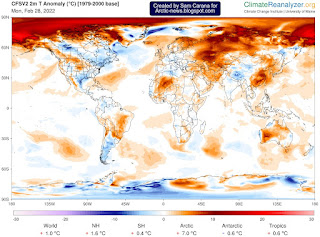 The next image on the right, by Climate Reanalyzer, illustrates that very high temperature anomalies can show up at the highest latitudes North during Winter on the Northern Hemisphere, in this case a temperature anomaly (vs 1979-2000) of 7°C for the Arctic as a whole on February 28, 2022.
It is ominous for such high anomalies to show up in the Arctic during a La Niña period, and when it's Winter on the Northern Hemisphere when there's only very little sunlight reaching the Arctic. 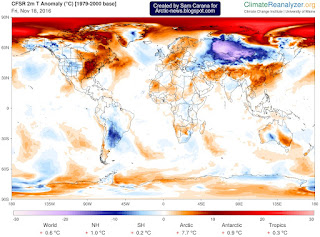 For comparison, the next image on the right shows a temperature anomaly (vs 1979-2000) of 7.7°C for the Arctic as a whole on November 18, 2016, when there was an El Niño.
We're currently in the depth of a persistent La Niña, as illustrated by the next image on the right, adapted from NOAA. This has been suppressing the temperature and it will keep suppressing the temperature until the start of the next El Niño. The next El Niño could push temperatures up even more strongly than the average El Niño, for a number of reasons. 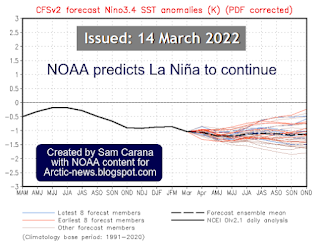 As the temperature keeps rising, ever more frequent strong El Niño events are likely to occur, as discussed in an earlier post. Furthermore, a 2019 study analyzes how tipping the ENSO into a permanent El Niño can trigger state transitions in global terrestrial ecosystems, as mentioned in an earlier post.

One of these elements causing the temperature to rise is the falling away of sulfate aerosols, while there could be a further temperature rise due to releases of other aerosols that have a net warming impact, such as black and brown carbon, which can increase dramatically as more wood burning and forest fires take place.
As the temperature of the atmosphere rises, this will trigger self-reinforcing feedbacks such as an increase in water vapor combined with a decrease in lower clouds decks, further increasing the temperature, as described at the clouds feedback page.

What could further push up temperatures a lot over the next few years is the compound impact of feedbacks in the Arctic, including decline of the snow and ice cover, releases of greenhouse gases from degrading subsea and terrestrial permafrost, and further distortion of the Jet Stream causing more extreme weather events.
Conclusion

Keep in mind that this 1909.3 ppb reading is for November 2021; it now is March 2022. Furthermore, NOAA's data are for marine surface measurements; more methane tends to accumulate at higher altitudes.
The image below shows that the MetOp-B satellite recorded a mean methane level of 1936 ppb at 321 mb on March 7, 2022 pm. 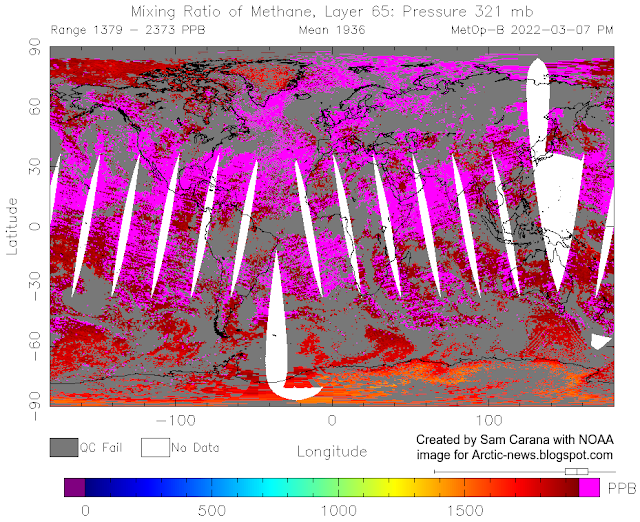 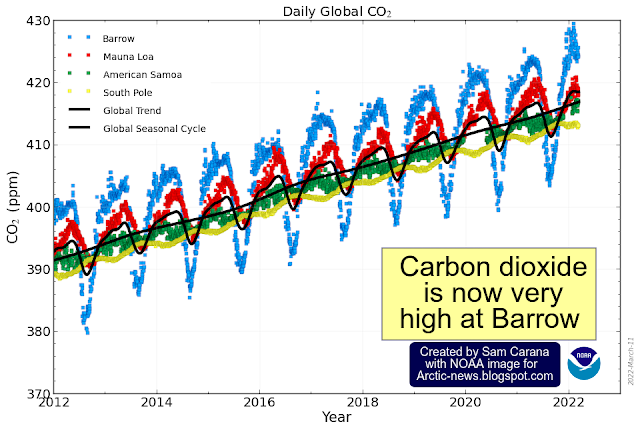 Clouds tipping point
The danger is that high greenhouse gas levels could combine to push the carbon dioxide equivalent (CO₂e) level over the 1200 ppm clouds tipping point, at first in one spot, causing low-altitude clouds in various neighboring areas to break up there, and then propagating break-up of clouds in further areas, as discussed at the clouds feedback page.

Alternatively, an additional 5 Gt of methane from abrupt release from the seafloor could raise the global mean methane concentration by about 2000 ppb, and even earlier than 2026.

At a 1-year GWP of 200, an extra 2000 ppb would translate into an extra 400 ppm CO₂e, thus pushing the joint impact of just two greenhouse gases (carbon dioxide and methane) above the 1200 ppm CO₂e clouds tipping point and raising the global temperature by 8°C due to the clouds feedback alone, i.e. on top of the additional rise caused by other warming elements, as further discussed below.
Seafloor methane eruptions could trigger a huge temperature rise

Warnings about the potential for seafloor methane releases have been given repeatedly, such as in this 2017 analysis, in this 2019 analysis (image below) and in a recent analysis (2022). Researchers in 2019 found amounts of methane in the air over the East Siberian Sea up to nine times the global average.

A 2021 analysis indicates that massive methane seepage from the seafloor of the Arctic Ocean occurred during ice sheet wastage over the last and penultimate deglaciation periods (i.e. the Holocene, ~20-15 ka, respectively the Eemian, ~140-130 ka).
At the time, seafloor methane entering the atmosphere could be accommodated without resulting in huge temperature rises, because such releases were spread out over relatively long periods, while the level of methane in the atmosphere at the time was relatively low and since the lifetime of methane is limited to a decade or so.
Today, circumstances are much more dire in many respects. While high heat peaks may have occurred locally during the last and penultimate deglaciation, today's global mean temperature is higher, as James Hansen et al., confirmed in a 2017 analysis. Furthermore, a 2012 analysis indicates that oceanic heat transport to the Arctic today is higher.

Greenhouse gas levels are very high at the moment and their rise is accelerating. As a result of the rapidity of today's rise, new seafloor methane eruptions can occur while previous methane releases haven't yet been broken down in the atmosphere.
Seafloor methane eruptions can thus trigger a huge temperature rise, as illustrated by the image on the right, from the extinction page.
Conclusions
The situation is dire and calls for the most comprehensive and effective action, as described at the Climate Plan.

• When Will We Die?
https://arctic-news.blogspot.com/2019/06/when-will-we-die.html
• Arctic methane release due to melting ice is likely to happen again
https://www.geosociety.org/GSA/News/pr/2021/21-15.aspx