The dilemma of climate scientists

by Andrew Glikson
Many climate change models, including by the IPCC, appear to neglect or minimize the amplifying feedbacks of global warming, which are pushing temperatures upward in a chain reaction-like process, as projected by Wally Broecker and others.

A climate chain reaction is believed to have pertained about 55 million years ago (Paleocene-Eocene Thermal Maximum [PETM]).

During the Anthropocene (post-1750 and in particular post-1900) greenhouse gas and temperature growth rates levels exceeded those of the PETM and of the end of the last glacial termination (LGT). During 2010-2020 an acceleration of global warming is reflected by an anomalous rise in greenhouse gas levels and temperatures (Figure 1).


According to Peter Ward and others early examples of mass extinctions triggered by biological processes were related to ocean anoxia and acidification leading to CH4 and H2S release by “purple” and “green” algae and sulphur bacteria. Likewise, anthropogenic global warming constitutes a geological/biological process for which the originating organisms (humans) have not to date been able to discover an effective method of control.

The critical criterion definitive of global warming is the atmospheric concentration of greenhouse gases, rising from 280 to 419 ppm, i.e. by about 49% since pre-industrial time, only rarely mentioned by the media and politicians. Other parameters of climate change, such as the level of methane and nitrous oxide, have risen about 3-fold. While opinions by journalists, politicians, economists and social scientists proliferate, less attention is given to what is indicated by climate science, rendering the global response to the looming calamity increasingly irrelevant.

Thus, whereas most models portray linear rise in temperature, the evidence for the breading of the circum-Arctic jet stream, allowing cold and warm fronts to cross the boundary, would result in high storminess in high latitudes.

“Most scientists agree that climate change is happening faster than predicted. More than one-third of the world’s soil, which produces 95% of the world’s food supply, is currently degraded. By 2035, outdoor air pollution is projected to be a top cause of environmentally-related deaths worldwide, and half the world’s population will face water shortages.” However, many scientists are reluctant to warn the public about the full consequences of accelerating global heating. Namely, as Joachim Schellnhuber, Germany’s chief climate scientist has stated, the existential risk to the life support systems of the planet.

There is a heavy price to pay for communicating distressing evidence, Cassandra-like, including psychological factors and/or social and professional isolation. Personal optimism may overcome realism. Some scientists are either self-censored or have their work suppressed or dismissed within institutions or by the media, including in government and academia. Some scientists have lost their position.

As cited in the article titled “When the End of Human Civilization Is Your Day Job“ … “Among many climate scientists, gloom has set in. Things are worse than we think, but they can't really talk about it”, and elsewhere “in private conversations, many climate scientists express far greater concern at the progression of global warming and its consequences than they do in public”. It is not uncommon to hear people criticizing climate scientists for not telling them more about the future climate, although when they are told, many recoil. Then there is the plethora of false promises by politicians.

As the world continues to spend $trillions each year on military preparation for war or nuclear war, resources needed if serious attempts are made for protection of life on Earth, despair sinks in.

But the world is now waking up to the climate calamity.

There must be hope.
A/Prof. Andrew Glikson

On borrowed time: How long to a Miocene-like tropical ~+4°C world?

On borrowed time: How long to a Miocene-like tropical ~+4°C world?
by A/Prof Andrew Glikson
Earth and climate scientist
Toward late this century global temperatures are likely to either reach super-tropical levels of >>14°C or/and extreme levels of storminess consequent on clashes between Arctic and Antarctic sourced cold and warm air and water masses.

Humans appear to be mainly concerned about any one issue at a time, and while COVID-19 is claiming the lives of millions Homo sapiens appears to be increasingly oblivious to the growing threat to billions of humans and to nature, including the inhabitability of large regions and extinguishment of habitats.

The almost universal assumption as if a reduction in greenhouse gas emissions is in itself sufficient to prevent further warming is misleading, since positive feedbacks from land and ocean would continue to raise greenhouse levels and temperatures.

Such feedback effects include: 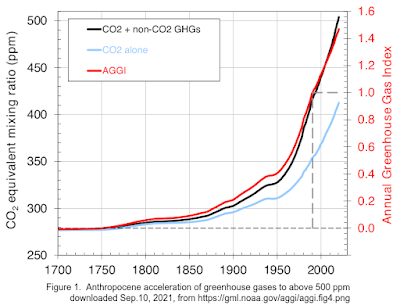 With a Miocene CO₂ level in the range of ~400-500 parts per million and mean temperatures up to 18.4°C, the atmosphere is tracking toward super-tropical temperatures, which would render large regions uninhabitable.

But even before such high mean temperatures is reached, the weakened jet stream climate zone boundary, allowing penetration of cold and warm fronts, allowing clashes between air and water masses of contrasting temperatures, would lead to storminess, disrupting human agriculture and habitats, as is already happening in northern Europe and within the Arctic circle. 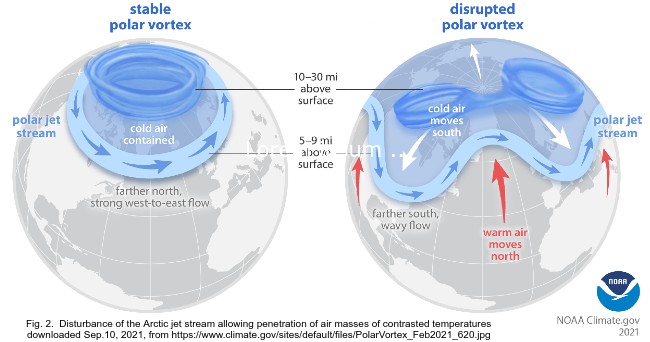 How long would it take for global temperatures to rise to about ~4°C and higher would depend on: 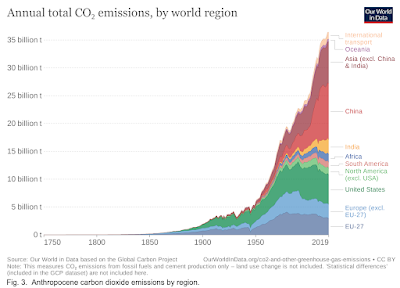 From the continuing rise of atmospheric greenhouse concentrations (CO₂: 2020 – 414.62 ppm; 2021 - 416.96 ppm) to date global greenhouse gas emissions are hardly slowing down, nor have attempts at mitigation and/or sequestration been effective. In 2019, the world emitted roughly 36.44 billion metric tons (BMT) of carbon dioxide, compared to 14.83 BMT in 1970.
According to the head of the International Energy Agency no new oil, gas or coal development ought to take place if the world is to reach net zero by 2050.
However, rising production of hydrocarbons in several regions, for example new drilling for oil in the North Sea, high production of oil and gas the USA, new coal mines in Australia and elsewhere cast doubt on the level of carbon emissions in future.
Conclusion: A rise in the mean global temperature to about 4 degrees Celsius or higher, as projected by IPCC, and/or a stormy climate consequent due to clashes between air and water masses of contrasting temperatures consequent on weakening of climate zone boundaries, are likely to progress through the 21st Century, severely disrupting natural and human habitats and species. 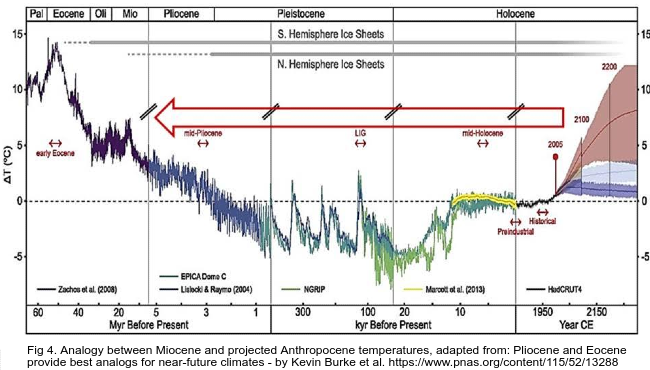