Methane is a substantial driver of global climate change, contributing 30 percent of current net climate warming. Concern over methane is mounting, due to leaks associated with rapidly expanding unconventional oil and gas extraction, and the potential for large-scale release of methane from the Arctic as ice cover continues to melt and decayed material releases methane to the atmosphere. At the same time, methane is a growing source of energy, and aggressive methane mitigation is key to avoiding dangerous levels of global warming.

While the liquid solvents were not effective for methane capture, a handful of zeolites had sufficient methane sorption to be technologically promising. The research appears in the April 16 edition of the journal, Nature Communications.

Unlike carbon dioxide, the largest emitted greenhouse gas, which can be captured both physically and chemically in a variety of solvents and porous solids, methane is completely non-polar and interacts very weakly with most materials.

"Methane capture poses a challenge that can only be addressed through extensive material screening and ingenious molecular-level designs," Maiti said.

Methane is far more potent as a greenhouse gas than CO2. Researchers have found that the release of as little as 1 percent of methane from the Arctic alone could have a warming effect approaching that being produced by all of the CO2 that has been pumped into the atmosphere by human activity since the start of the Industrial Revolution.

Methane is emitted at a wide range of concentrations from a variety of sources, including natural gas systems, livestock, landfills, coal mining, manure management, wastewater treatment, rice cultivation and a few combustion processes.

The team's research focused on two different applications -- concentrating a medium-purity methane stream to a high-purity range (greater than 90 percent), as involved in purifying a low-quality natural gas; and concentrating a dilute stream (about 1 percent or lower) to the medium-purity range (greater than 5 percent), above methane's flammability limit in air.

Through an extensive study, the team found that none of the common solvents (including ionic liquids) appears to possess enough affinity toward methane to be of practical use. However, a systematic screening of around 100,000 zeolite structures uncovered a few nanoporous candidates that appear technologically promising.

Zeolites are unique structures that can be used for many different types of gas separations and storage applications because of their diverse topology from various networks of the framework atoms. In the team's simulations, one specific zeolite, dubbed SBN, captured enough medium source methane to turn it to high purity methane, which in turn could be used to generate efficient electricity.

"We used free-energy profiling and geometric analysis in these candidate zeolites to understand how the distribution and connectivity of pore structures and binding sites can lead to enhanced sorption of methane while being competitive with CO2 sorption at the same time," Maiti said.

Other zeolites, named ZON and FER, were able to concentrate dilute methane streams into moderate concentrations that could be used to treat coal-mine ventilation air.

The work at LLNL was funded by the Advanced Research Projects Agency-Energy (ARPA-E).

How much methane is located in the Arctic?

Arctic sources of carbon have been studied by a team of researchers at Lawrence Livermore National Laboratory, Livermore, California, United States, led by Joshuah Stolaroff. Their estimates are illustrated in the image below, showing the potential total release, next to their characteristic annual release of methane and the geographic extent for each source.
Note: Numbers in brackets behind the figures in above table relate to references below. If you cannot view these references, click here.


For comparison, the NOAA image below shows the world's carbon dioxide emissions for each year in PgC (i.e. GtC or billions of tonnes of carbon). 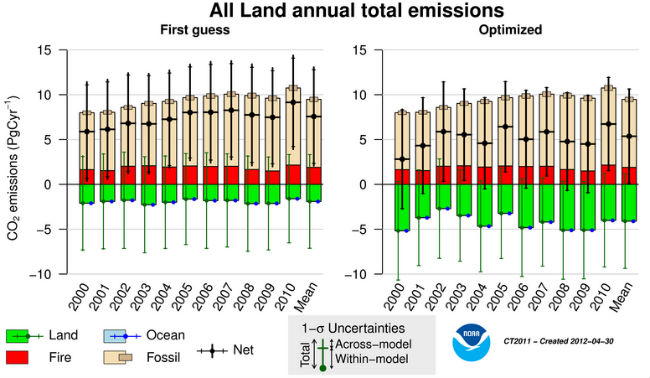 Annual total emissions. The bars in this figure represent carbon dioxide emissions for each year in PgC yr-1 from the specified region. The final bar, labeled 'Mean', represents the 2001-2010 average. CarbonTracker models four types of surface-to-amosphere exchange of CO2, each of which is shown in a different color: fossil fuel emissions (tan), terrestrial biosphere flux excluding fires (green), direct emissions from fires (red), and air-sea gas exchange (blue). Negative emissions indicate that the flux removes CO2 from the atmosphere, and such sinks have bars that extend below zero. The net surface exchange, computed as the sum of these four components, is shown as a thick black line.

Clearly, if merely a fraction of the sources at the top would end up in the atmosphere, we'd be in big trouble. Some of the carbon may be released gradually in the form of carbon dioxide, but it's much worse if large amounts of methane escape abruptly into the atmosphere, given factors such as methane's high Global Warming Potential. Anyway, it should be clear that the huge size of some of these sources poses a terrifying threat.