The Arctic Natural Gas Extraction, Liquefaction & Sales (ANGELS) Proposal aims to reduce the threat of large, abrupt releases of methane in the Arctic, by extracting methane from hydrates prone to destabilization.

You can view the presentation by clicking on the link below:
docs.google.com/presentation/d/1vOw215pGuiob9q-u0VRrc2Uumfxr8xU3s4Q2k_YNdsE/edit

A Proposal for the Prevention of
Arctic Methane Induced Catastrophic
Global Climate Change by Extraction
of Methane from beneath the Permafrost/
Arctic Methane Hydrates and its Storage and
Sale as a Subsidized "Green Gas"
Energy Source
By Malcolm P.R. Light
PhD. UCL
May 27th, 2012

DEDICATION
This proposal is dedicated to my Father and Mother, Ivan and Avril Light,
both meteorologists and farmers who knew about the vagaries of the weather;
and to all our grandchildren whose entire future depends on its successful outcome.


EXECUTIVE SUMMARY
Methane hydrates (clathrates) exist on the Arctic submarine shelf and slope where they are stabilized by the low temperatures and they have a continuous cap of frozen permafrost which normally prevents methane escape (Figure 1 below). 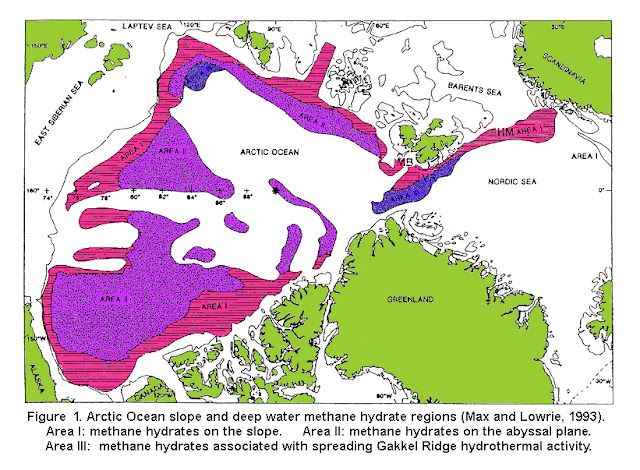 However, recent research has shown that millions of tons of methane are already being released in the Siberian Arctic through perforated zones in the subsea permafrost cap with the concentrations reaching up to 100 times the normal, such as in the discharge region of the Lena River and the junction of the Laptev and East Siberian Seas (Shakova et al. 2010). 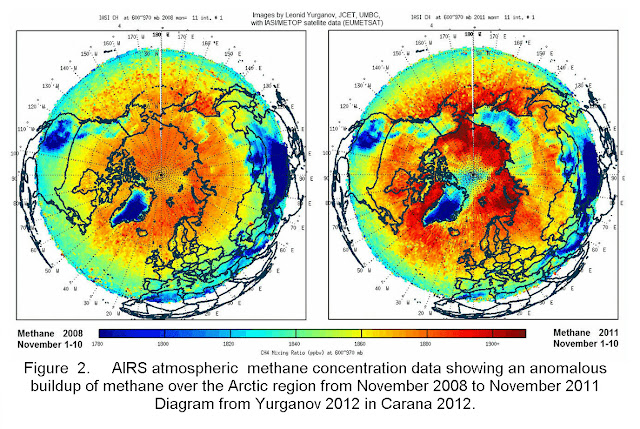 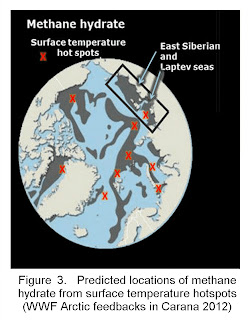 This indicates that there is a strong correlation between the dissociation of Arctic subsea methane hydrates from the effects of globally warmed seawater and the increasing size and rate of eruptions of methane into the Arctic atmosphere. 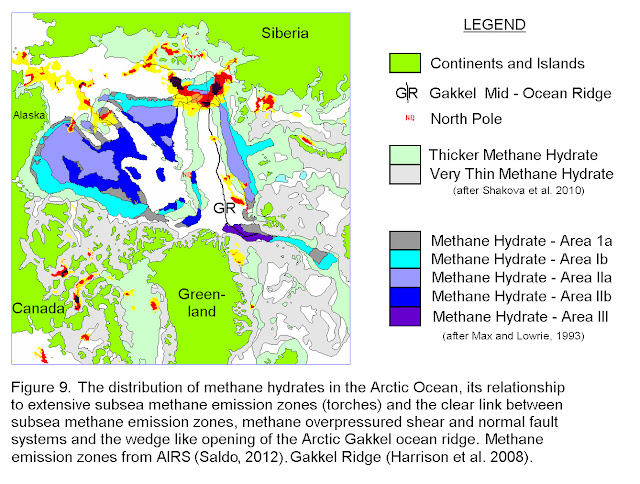 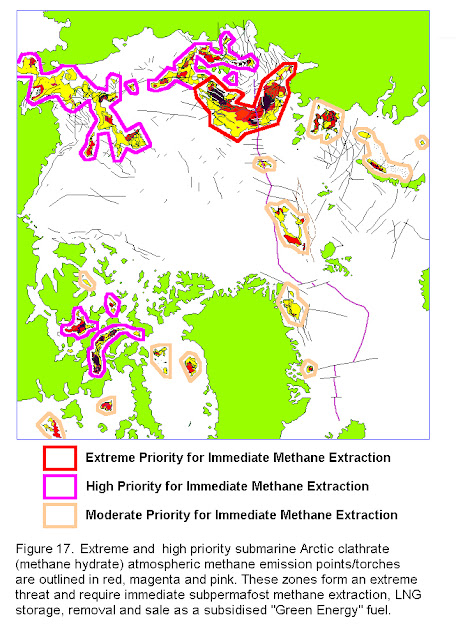 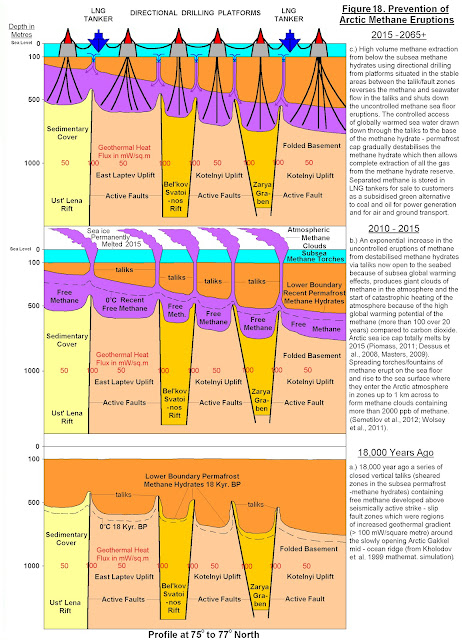 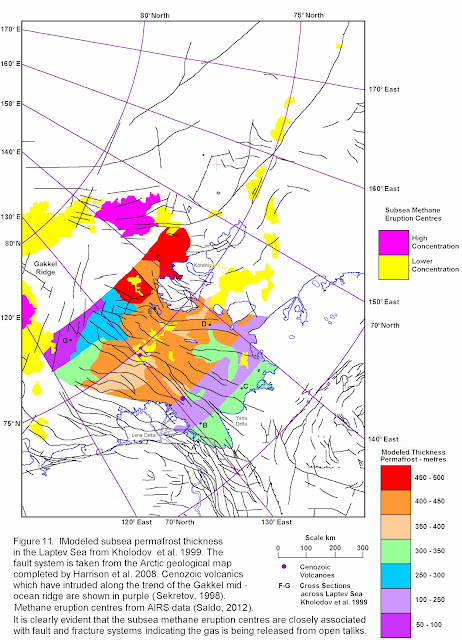 There are some 1000 Gt to 1400 Gt (10^9 tonnes) of carbon contained in the methane hydrates on the East Siberian Arctic Shelf and 700 Gt of free methane is trapped under the Arctic submarine permafrost (Shakova et al. 2008, 2010). Shakova et al. estimate that between 5% to 10% of the subsea permafrost (methane hydrates) in that region is now punctured allowing methane to escape at a rate of about 0.5 Mt (500,000 tonnes) a year and that up to 50 Gt (10^9 tonnes) could be released abruptly at any time soon. Release of this subsea Arctic methane would increase the worldwide atmospheric methane content about 12 times equivalent to doubling the carbon dioxide content of the atmosphere. This "methane hydrate gun", which is cocked and ready to fire at any moment, is an extremely serious scenario that will cause abrupt climate change (CCSP, 2008; IMPACTS 2008). Even if this subsea volume of Arctic methane is released over a longer interval of some ten to twenty years it will still result in a massive feedback on global warming and drive the Earth on an irretrievable plunge into total extinction.

After 2015, when the Arctic Ocean becomes navigable (Figure 5 above, Carana 2012b) it will be possible to set up a whole series of drilling platforms adjacent to, but at least 1 km away from the high volume methane eruption zones and to directionally drill inclined wells down to intersect the free methane below the sealing methane hydrate permafrost cap within the underlying fault network (Figure 18 above).

The methane and seawater will be produced to the surface where the separated methane will be processed in Floating Liquefied Natural Gas (FLNG) facilities and stored in LNG tankers for sale to customers as a subsidised green alternative to coal and oil for power generation, air and ground transport, for home heating and cooking and the manufacture of hydrogen, fertilizers, fabrics, glass, steel, plastics, paint and other products.

Where the trapped methane is sufficiently geopressured within the fault system network underlying the Arctic subsea permafrost and is partially dissolved in the water (Light, 1985; Tyler, Light and Ewing, 1984; Ewing, Light and Tyler, 1984) it may be possible to coproduce it with the seawater which would then be disposed of after the methane had be separated from it for storage (Jackson, Light and Ayers, 1987; Anderson et al., 1984; Randolph and Rogers, 1984; Chesney et al., 1982).

Many methane eruption zones occur along the narrow fault bound channels separating the complex island archipelago of Arctic Canada (Figure 6 and 9). In these regions drilling rigs could be located on shore or offshore and drill inclined wells to intersect the free methane zones at depth beneath the methane hydrates, while the atmospheric methane clouds could be partly eliminated by using a beamed interfering radio transmission system (Lucy Project) (Light 2011a). A similar set of onshore drilling rigs could tap subpermafrost methane along the east coast of Novaya Zemlya (Figure 6 below and 9 above). 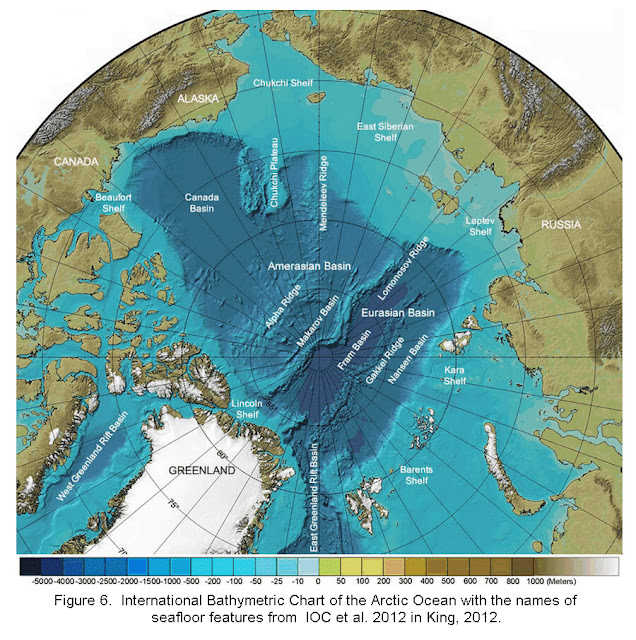 Methane is a high energy fuel, with more energy than other comparable fossil fuels (Wales 2012). As a liquid natural gas it can be used for aircraft and road transport and rocket fuel and produces little pollution compared to coal, gasoline and other hydrocarbon fuels.