Could Humans Go Extinct Within Years? 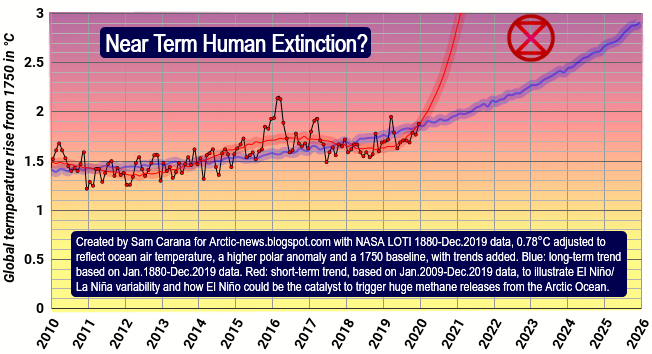 Above image depicts how humans could go extinct within years. The image was created with NASA LOTI 1880-Dec.2019 data, 0.78°C adjusted to reflect ocean air temperatures (as opposed to sea surface temperatures), to reflect higher polar temperature anomalies (as opposed to leaving out 'missing' data) and to reflect a 1750 baseline (as opposed to a 1951-1980 baseline), with two trends added. Blue: a long-term trend based on Jan.1880-Dec.2019 data. Red: a short-term trend, based on Jan.2009-Dec.2019 data, to illustrate El Niño/La Niña variability and how El Niño could be the catalyst to trigger huge methane releases from the Arctic Ocean. This updates an earlier post with more detail on how the image was created. 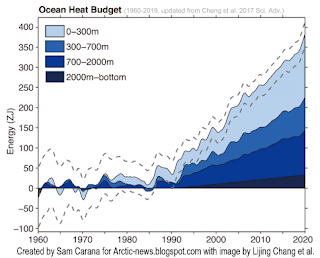 The image on the right shows how ocean heat has increased over the years (from: from the paper Record-Setting Ocean Warmth Continued in 2019, by Lijing Chang et al.).

Ocean heat is increasing rapidly, especially on the Northern Hemisphere, as illustrated by the NOAA image below, showing the rise from 1980 through 2019.

The image underneath uses the same data and has a trend added pointing at a 1.5°C anomaly from the 20th century average by the year 2026.

As discussed in an earlier point, there is a tipping point at 1°C above the 20th century average, i.e. there are indications that a rise of 1°C will result in most of the sea ice underneath the surface to disappear. This sea ice used to consume the inflow of warm, salty water from the Atlantic Ocean and the Pacific Ocean. So, while there may still be sea ice left at the surface, the latent heat buffer will be gone.
Loss of the latent heat buffer speeds up heating of the Arctic Ocean, with the danger that huge amounts of methane will be released from the seafloor. The image below illustrates the danger, showing that peak methane levels as high as 2670 parts per billion (ppb) were recorded by the MetOp-1 satellite on January 2, 2020 pm at 469 mb. 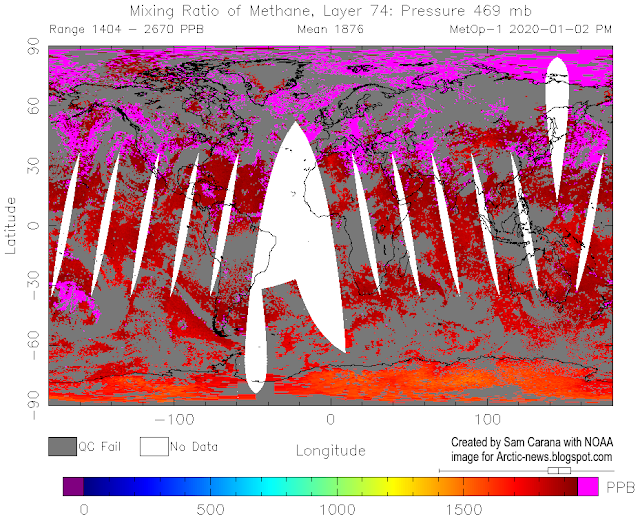 Most worryingly, above image shows a large almost-solidly magenta-colored area blanketing the East Siberian Arctic Shelf (ESAS), with magenta indicating levels above 1950 ppb. Such satellite measurements indicate that large amounts of methane are erupting from the seafloor of the Arctic Ocean.

Above image shows that, a few years ago, methane was accumulating most strongly at an altitude corresponding to a pressure of some 400 mb. More recently, methane has been accumulating most strongly at higher altitudes, corresponding to a pressure of just under 300 mb, which is the upper limit of the troposphere over the North Pole. Methane tends to follow the Tropopause, i.e. at higher altitudes methane will be present in higher concentrations closer to the Equator, where the troposphere extends further into space, as discussed in an earlier post.

The NOAA graph below indicates that methane levels are growing at over 10 parts per billion per year, and this may actually underestimate global methane concentrations. The graph uses land-based measurements taken at sea level that can miss methane rising from the seafloor, especially from the seafloor of the Arctic Ocean, since there are few measuring stations in the Arctic in the first place. Land-based measurements can additionally overlook methane that is moving along the Tropopause from the Arctic toward the Equator. 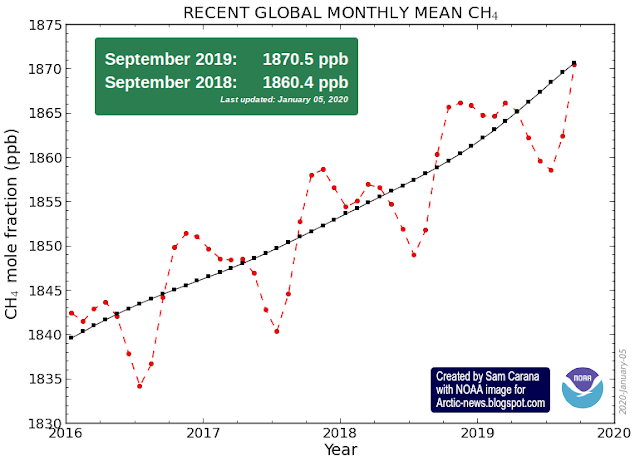 Ominously, the image below shows high methane levels at Barrow, Alaska, at the end of January 2020. 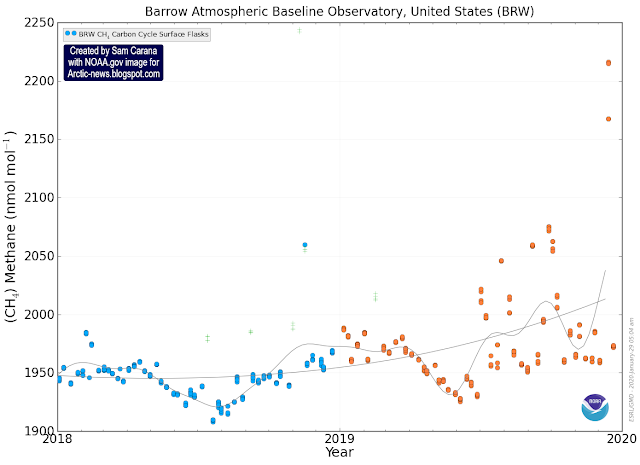 Rising CO₂ levels are also worrying. A daily average CO₂ level of 415.79 ppm was recorded by NOAA at Mauna Loa, Hawaii, on January 21, 2020, a level that is unprecedented for millions of years. Since an annual peak is typically reached in May, we can expect even higher levels over the coming months. 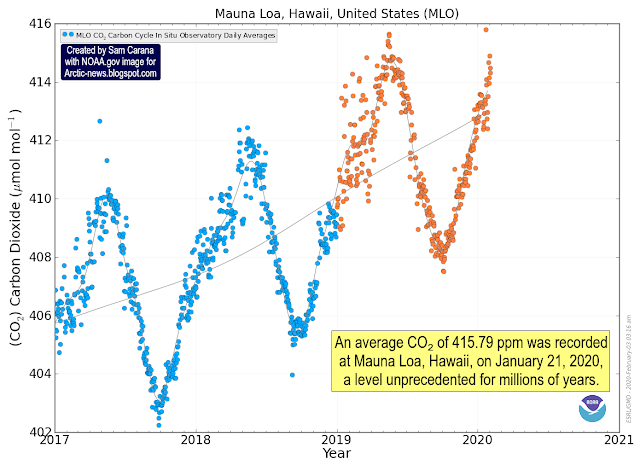 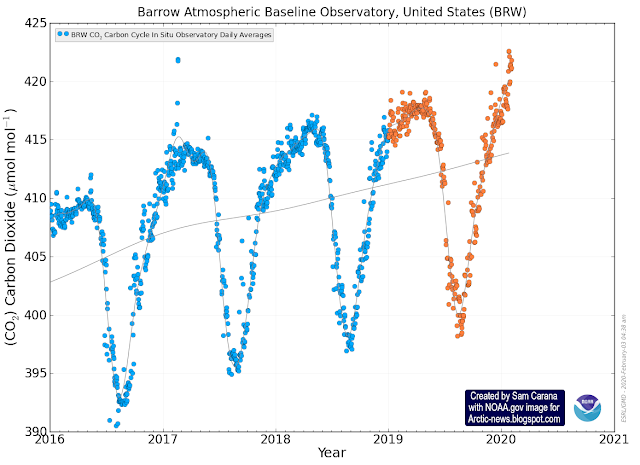 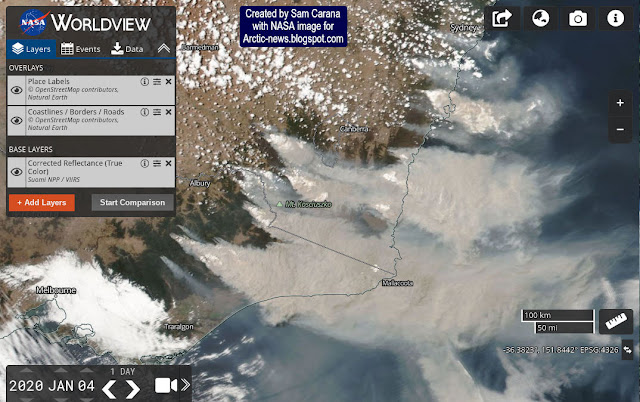 Such fires can generate huge amounts of smoke, with smoke rising up high in the atmosphere and entering the stratosphere, while circumnavigating Earth. The ferocity of these fires is also shown in the NASA video below.


In the video below, Guy McPherson gives examples of species that went extinct rapidly.


Meanwhile, the Bulletin of the Atomic Scientists has moved the Doomsday Clock closer to Midnight, to 100 seconds to Midnight, adding that Civilization-ending nuclear war—whether started by design, blunder, or simple miscommunication—is a genuine possibility. Climate change that could devastate the planet is undeniably happening. And for a variety of reasons that include a corrupted and manipulated media environment, democratic governments and other institutions that should be working to address these threats have failed to rise to the challenge. Faced with a daunting threat landscape and a new willingness of political leaders to reject the negotiations and institutions that can protect civilization over the long term, the Bulletin of the Atomic Scientists Science and Security Board moved the Doomsday Clock 20 seconds closer to midnight—closer to apocalypse than ever.

The image below, created with thebulletin.org content and data from 1991 to 2020, has a linear trend added that points at Midnight by 2022. 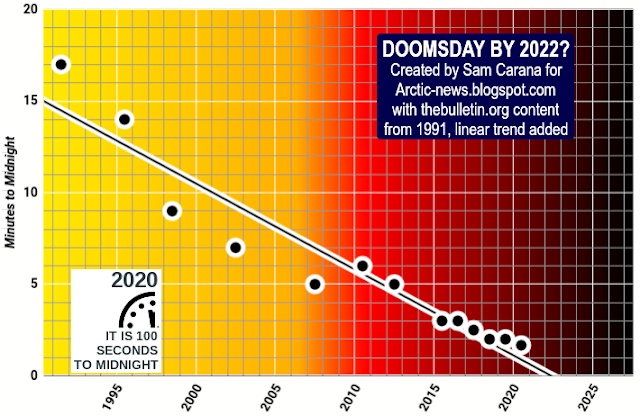 • Bulletin of the Atomic Scientists
https://thebulletin.org/doomsday-clock/past-statements/

The Australian firestorms: portents of a planetary future

Global warming and its disastrous consequences are now truly with us since the second part of 2019. At the moment a change in the weather has given parts of the country a respite from the raging fires, some of which are still burning or smoldering, waiting for another warm spell to flare up. The danger zones include the Australian Capital Territory, from where these lines are written. To date, 18.6 million hectares (186,000 square kilometers) were burnt, including native forests, native animals, homesteads and towns, and 24 people died. The firestorms betray harbingers of a planetary future, or a lack of such, under ever rising temperatures and extreme weather events inherent in fossil fuel driven global warming.

However, bar the transient masking effects of sulphur aerosols, which according to estimates by Hansen et al. (2011) induce more than 1.0°C of cooling, global temperatures have already reached near 2.0°C (by analogy to the requirement for a patient’s body temperature to be measured before and not after aspirin has been taken). As aerosols are not homogeneously distributed, in some parts of the world temperatures have already soared to such levels. Thus the degree to which aerosols cool the earth, which depends on aerosol particle size range, has been grossly underestimated.

The rate of global warming, at ~2 to 3 ppm year and ~1.5°C in about one century, faster by an order of magnitude then geological climate catastrophe such as the PETM and the KT impact, has taken scientists by surprise, requiring a change from the term climate change to climate calamity.

In Australia mean temperatures have risen by 1.5°C between 1910 and 2019 (Figure 2), as a combination of global warming and the ENSO conditions, as reported by the Bureau of Meteorology.

“The Indian Ocean Dipole (IOD) has returned to neutral after one of the strongest positive IOD events to impact Australia in recent history ... the IOD’s legacy of widespread warm and dry conditions during the second half of 2019 primed the Australian landscape for bushfire weather and heatwaves this summer. In the Pacific Ocean, although indicators of the El Niño–Southern Oscillation (ENSO) are neutral, the tropical ocean near and to the west of the Date Line remains warmer than average, potentially drawing some moisture away from Australia.”

The prolonged drought (Figure 2 C, D), low fuel moisture, high temperatures (Figure 2A) and warm winds emanating from the inland have rendered large parts of the Australian continent tinder dry, creating severe fire weather (Figure 2B) subject to ignition by lightning and human factors. Fires on a large scale create their own weather (see: bushfire raging in Mount Adrah and firestorm). Observations of major conflagrations, including the 2003 Canberra fires, indicate fires can form atmospheric plumes which can migrate and as hot plumes radiating toward the ground (fire tornadoes).

The underlying factor for rising temperatures and increasingly severe droughts in Australia is the polar-ward shift in climate zones (see map Oceania) as the Earth warms, estimated as approximately 56-111 km per decade, where dry hot subtropical zones encroach into temperate zones, as is also the case in South Africa and the Sahara.

Smoke signals emanating from the Australian fires are now circling around the globe (Figure 3) signaling a warning of the future state of Earth should Homo sapiens, so called, not wake up to the consequences of its actions.