The NASA image below shows the March 2022 temperature anomaly. The Arctic is heating up strongly. 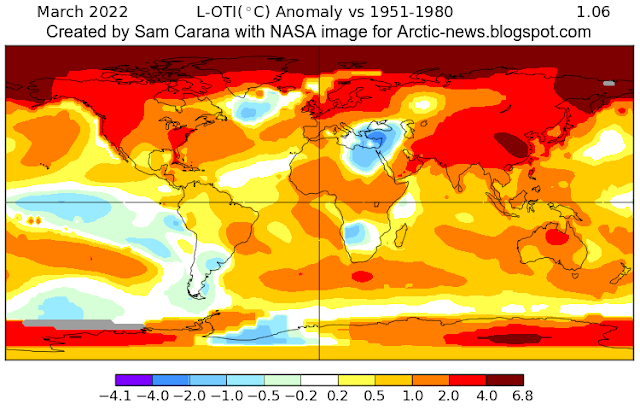 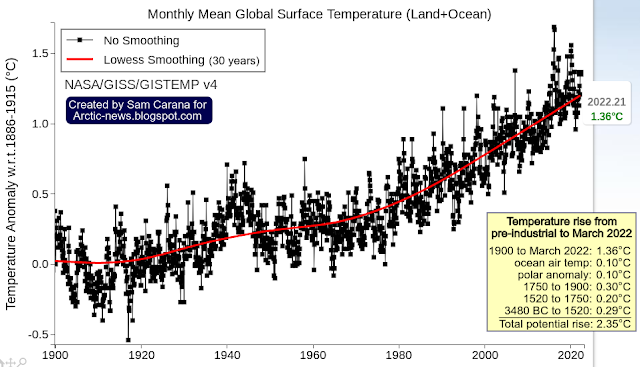 The box on above image shows that, when including further adjustment, the temperature rise from pre-industrial to March 2022 could be as much as 2.35°C. Details of the adjustment are described at the pre-industrial page. A 2.35°C rise is only 0.65°C away from a 3°C rise and, as described before, a 3°C rise will likely drive humans (and many other species) into extinction.
Note that the March 2022 temperature is suppressed, as we're currently in the depth of a persistent La Niña, as illustrated by the NOAA image on the right.

The above NOAA image shows that the difference between the top of El Niño and the bottom of La Niña could be more than half a degree Celsius. The peak of the next El Niño may well coincide with a high number of sunspots (NOAA image right).
The image below features two trends. The black trend is based on adjusted Jan.1880-Mar.2022 NASA data and shows how 3°C could be crossed in 2027. The blue trend is based on adjusted Apr.2012-Mar.2022 NASA data and better reflects short-term variables such as sunspots and El Niño. The blue trend shows how 3°C could be crossed in 2025, triggered by an emerging El Niño and high sunspots. 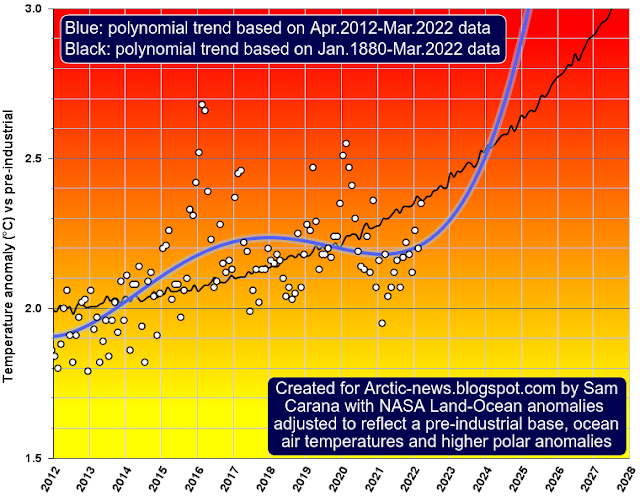 A strong El Niño combined with high sunspots could cause the global temperature rise to cross 3°C in 2025.

Moreover, this could trigger a runaway temperature rise, starting before 2026 where the temperature rise is felt most strongly, i.e. in the Arctic, especially during El Niño events, as illustrated by the image on the right that shows anomalies (vs 1951-1980) as high as 6.6°C in the Arctic.

The potential temperature rise is illustrated by the bar on the right.
As temperatures rise, loss of Arctic sea ice and of its latent heat buffer will cause more heating of the atmosphere, while changes to the Jet Stream will cause more extreme weather.
As humans go extinct, transport and industrial activities will stop that currently co-emit sulfur that masks the full extent of the temperature rise.
In addition, as also discussed at the aerosols page, worldwide forest fires and trash fires could cause huge amounts of black carbon to be emitted.
Rising temperatures will result in more water vapor in the atmosphere (7% more water vapor for every 1°C warming), further amplifying the temperature rise, since water vapor is a potent greenhouse gas.
As the IPCC warns (see above image), for each additional 1°C of warming, the global volume of perennially frozen ground to 3 m below the surface is projected to decrease by about 25% relative to the present volume, and the IPCC adds that these decreases may be underestimates. As permafrost declines, huge amounts of carbon dioxide, methane and nitrous oxide get released.
As the ocean heats up, a huge temperature rise could be caused by releases of seafloor methane, further contributing to the clouds tipping point (at 1200 ppm CO₂e) to get crossed, causing a further rise of 8°C. Altogether, the temperature rise could exceed 18°C.
The situation is dire and calls for comprehensive and effective action, as described in the Climate Plan.

In the video below, Jennifer Hynes and Sandy Schoelles discuss the temperature rise.