When Will We Die?

A rise of more than 5°C could happen within a decade, possibly by 2026. Humans will likely go extinct with a 3°C rise and most life on Earth will disappear with a 5°C rise. In the light of this, we should act with integrity. 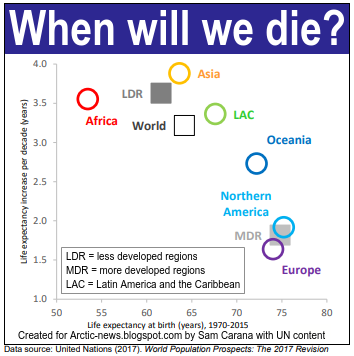 When will we die?

The outlook for people living now is that they will die before the end of the century. After all, even in more developed regions, people statistically die at an age below 75 years, as the image on the right illustrates.

The image calls up questions regarding possible shortening of life expectancy due to global heating.

A 2018 study by Strona & Bradshaw indicates that most life on Earth will disappear with a 5°C rise (see box on the right).

The first question therefore is whether and how fast such a rise could eventuate.

Furthermore, global heating projections for the year 2100 may seem rather irrelevant to many people, as they do not expect to be alive by the year 2100.

A second question therefore is what makes most sense, focusing on the year 2100, or on how much temperatures could rise over the next decade.

A recent study points at a tipping point of 1,200 ppm CO₂e when marine stratus clouds start to disappear, resulting in an additional global heating of eight degrees Celsius (8°C or 14.4°F).

In other words, such a rise from clouds feedback would clearly suffice to cause extinction of most life on Earth.

Could this tipping point be crossed soon? 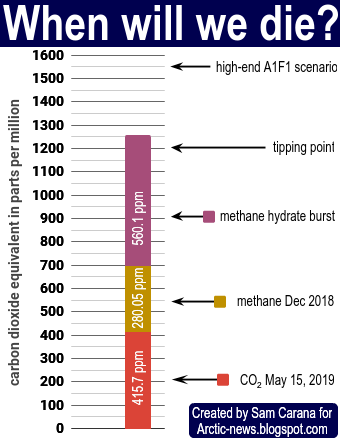 As discussed, the year 2100 is rather distant. The question is, could this 1,200 ppm CO₂e tipping point be crossed earlier, say, within one decade?

On May 15, 2019, scripps.ucsd.edu recorded a carbon dioxide level of 415.7 ppm at Mauna Loa, Hawaii. NOAA recorded a methane level of 1.867 ppm for December 2018. As shown at the FAQ page, methane is 150 times as potent as a greenhouse gas over the next ten years compared to carbon dioxide. Accordingly, this 1.867 ppm of methane causes global heating of 280.05 ppm CO₂e.

Imagine a burst of methane erupting from the seafloor of the Arctic Ocean that would add an amount of methane to the atmosphere equal to twice the methane that is already there. Twice the 1.867 ppm of methane is 3.734 ppm, which at 150 times the potency of carbon dioxide translates into a CO₂e of 560.1 ppm.

Adding this to the current levels of carbon dioxide and methane results in a level of 1255.85 ppm CO₂e, well exceeding the 1,200 ppm CO₂e tipping point and thus triggering the extra 8°C rise.

Above image was created with content from a recent paper by Natalia Shakhova et al. It shows that the outlook is much more grim than many people realize. 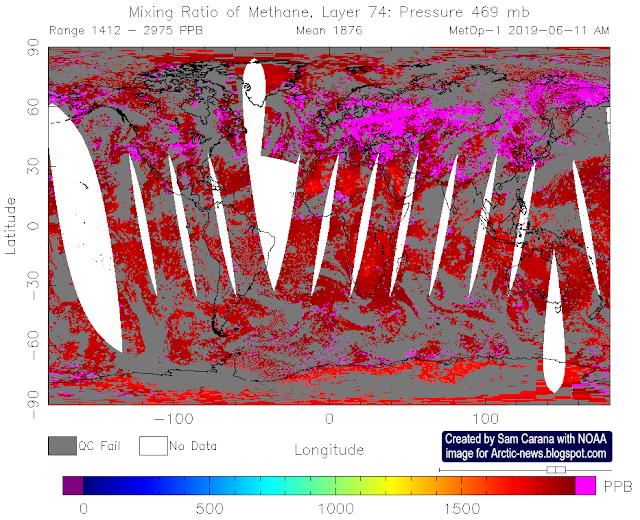 Above image illustrates the danger, as an ominous sign of what's on the way. Methane levels as high as 2.975 ppm were recorded on June 11, 2019, at 469 mb. A peak this high is likely to have originated from the seafloor. 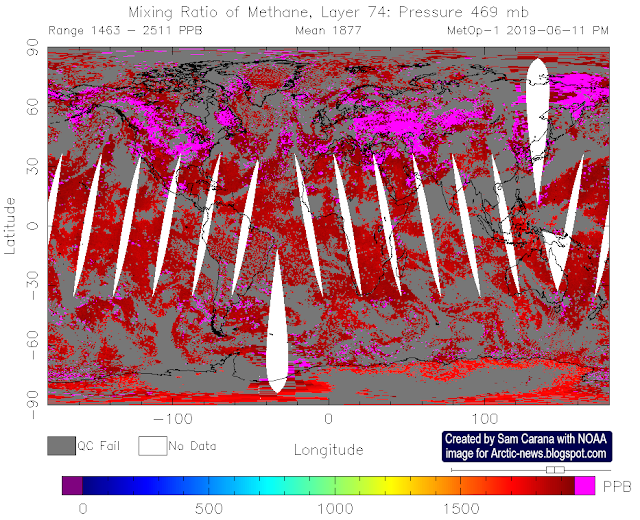 Above image shows a solid-colored magenta area over the ESAS that afternoon, further indicating that large amounts of methane did erupt earlier that day from destabilizing sediments in the ESAS.

The Australian Koala Foundation has declared Koalas "functionally extinct". While there still are some 80,000 Koalas left, it is unlikely that Koalas will be able to escape full extinction for long.

A rapid temperature rise could make virtually all species on Earth go extinct. As the above-mentioned study points out, even the most robust lifeforms on Earth will likely disappear with a 5°C rise, as species on which they depend will die.

For mammals, which depend on a lot of other species, extinction is likely to come earlier.  When looking at near-term human extinction, a 3°C rise from preindustrial will likely suffice to cause extinction.

In 2019, the global temperature could already be 1.85°C above preindustrial and a rapid temperature rise could take place over the next few years.

A lot of good action is possible, as described in the Climate Plan, which offers the greatest amount of flexibility in local implementation, within the constraints of the need to act on climate change as acknowledged, e.g. at the Paris Agreement.

Nonetheless, humans likely are already functionally extinct, as is most life on Earth. This may come as a surprise to many people, but that shouldn't stop people from doing the right thing.

The above image reflects the joint CO₂e impact of carbon dioxide and methane. In addition, there is the impact of further greenhouse gases, such as nitrous oxide and CFCs, as described in a recent post. There are more warming elements, such as albedo loss associated with the decline of the snow and ice cover. These warming elements could jointly push up the temperature rise to some 10°C above preindustrial, while the clouds feedback could add a further 8°C on top of that.

Sulfates do have a cooling effect, but this effect may fall away as society grinds to a halt and stops co-emitting sulfates alongside other emissions in the process of burning fuel, as Guy McPherson has pointed out repeatedly, e.g. in this recent post.


Added below is a video edited by Tim Bob of Guy McPherson talking in Juneau, Alaska, in April, 2019.

In the video below, Examples of Rapid Extinction, Guy McPherson gives examples of species that went extinct rapidly in the past, warning that to rule out rapid extinction of humans would be foolish.

• FAQ #13: What is the global warming potential of methane?
https://arctic-news.blogspot.com/p/faq.html#13

• Guy McPherson at the University of Alaska-Fairbanks, April 2019
https://guymcpherson.com/2019/04/the-first-of-two-presentations-at-the-university-of-alaska-fairbanks/

• Seven Distinct Paths to Loss of Habitat for Humans, by Guy McPherson
https://weeklyhubris.com/seven-distinct-paths-to-loss-of-habitat-for-humans

• A report claims koalas are ‘functionally extinct’ – but what does that mean?
https://theconversation.com/a-report-claims-koalas-are-functionally-extinct-but-what-does-that-mean-116665

• Why the Heck Do So Many Koalas Have Chlamydia?
https://www.livescience.com/62517-how-koalas-get-chlamydia.html