Limiting global warming to 2 degrees Celsius will require not only reducing emissions of carbon dioxide, but also active removal of carbon dioxide from the atmosphere. This conclusion from the Intergovernmental Panel on Climate Change has prompted heightened interest in "negative emissions technologies."

A new study published June 25 in Nature Climate Change evaluates the potential for recently described methods that capture carbon dioxide from the atmosphere through an "electrogeochemical" process that also generates hydrogen gas for use as fuel and creates by-products that can help counteract ocean acidification.

The process uses electricity from a renewable energy source for electrolysis of saline water to generate hydrogen and oxygen, coupled with reactions involving globally abundant minerals to produce a solution that strongly absorbs and retains carbon dioxide from the atmosphere. Rau and other researchers have developed several related methods, all of which involve electrochemistry, saline water, and carbonate or silicate minerals.

"It not only reduces atmospheric carbon dioxide, it also adds alkalinity to the ocean, so it's a two-pronged benefit," Rau said. "The process simply converts carbon dioxide into a dissolved mineral bicarbonate, which is already abundant in the ocean and helps counter acidification."

The negative emissions approach that has received the most attention so far is known as "biomass energy plus carbon capture and storage" (BECCS). This involves growing trees or other bioenergy crops (which absorb carbon dioxide as they grow), burning the biomass as fuel for power plants, capturing the emissions, and burying the concentrated carbon dioxide underground.

"BECCS is expensive and energetically costly. We think this electrochemical process of hydrogen generation provides a more efficient and higher capacity way of generating energy with negative emissions," Rau said.

He and his coauthors estimated that electrogeochemical methods could, on average, increase energy generation and carbon removal by more than 50 times relative to BECCS, at equivalent or lower cost. He acknowledged that BECCS is farther along in terms of implementation, with some biomass energy plants already in operation. Also, BECCS produces electricity rather than less widely used hydrogen.

"The issues are how to supply enough biomass and the cost and risk associated with putting concentrated carbon dioxide in the ground and hoping it stays there," Rau said.

The electrogeochemical methods have been demonstrated in the laboratory, but more research is needed to scale them up. The technology would probably be limited to sites on the coast or offshore with access to saltwater, abundant renewable energy, and minerals. Coauthor Heather Willauer at the U.S. Naval Research Laboratory leads the most advanced project of this type, an electrolytic-cation exchange module designed to produce hydrogen and remove carbon dioxide through electrolysis of seawater. Instead of then combining the carbon dioxide and hydrogen to make hydrocarbon fuels (the Navy's primary interest), the process could be modified to transform and store the carbon dioxide as ocean bicarbonate, thus achieving negative emissions.

"It's early days in negative emissions technology, and we need to keep an open mind about what options might emerge," Rau said. "We also need policies that will foster the emergence of these technologies."

In addition to Rau and Willauer, coauthor Zhiyong Jason Ren at the University of Colorado in Boulder (now at Princeton University) also contributed to the paper. This work was supported by Lawrence Livermore National Laboratory, Office of Naval Research, and National Science Foundation.

Posted by Sam Carana at 6:57 PM No comments:

As the combination image below shows, it was as hot as 32.7°C or 90.9°F (left panel, at the green circle) on June 11, 2018, on the coast of Hudson Bay. The right panel shows the jet stream crossing the Arctic, while numerous cyclones are visible on both images. 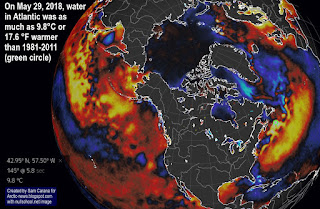 Three ways in which heat enters the Arctic Ocean are:

2. Rivers that end in the Arctic Ocean can carry huge amounts of heat. 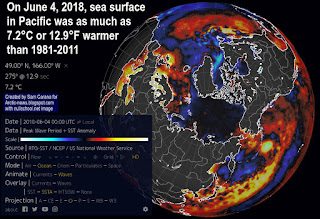 3. Heat is also entering the Arctic Ocean from the Atlantic Ocean and the Pacific Ocean.

Feedbacks, such as changes to the jet stream, can further speed up warming of the Arctic Ocean. 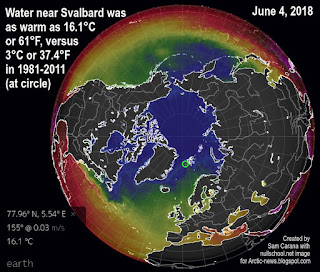 As the Arctic warms up faster than the rest of the world, the temperature difference between the Arctic and the Equator decreases, making the Jet Stream wavier, with longer loops that allow more warm air to enter the Arctic and at the same time allow more cold air to flow out of the Arctic (feedback #10 on the feedbacks page).

As temperatures keep rising, increasingly stronger winds over oceans are also causing more heat to enter the Arctic Ocean from the North Atlantic, and from the Pacific Ocean. 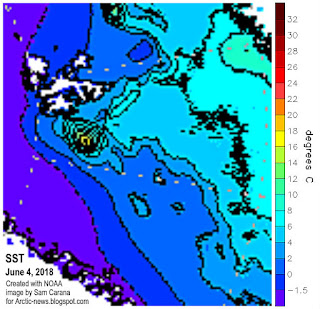 On June 4, 2018, sea surface temperature near Svalbard was as warm as indicated by the color yellow on the image on the right, i.e. 16-18°C or 60.8-64.4°F. For more background on the warm water near Svalbard, also see the earlier post Accelerating Warming of the Arctic Ocean.

This heat will warm up the water underneath the sea ice, thus melting the sea ice from below.

Furthermore, as the sea ice retreats, more sunlight will be absorbed by the Arctic Ocean, instead of being reflected back into space, thus further speeding up sea ice decline.

Oceans take up over 90% of global warming, as illustrated by above image. Ocean currents make that huge amounts of this heat are entering the Arctic Ocean from the Pacific Ocean and the Atlantic Ocean.

The right-hand panel of the image below shows the extent of the permafrost on the Northern Hemisphere. The subsea permafrost north of Siberia is prone to melting due to the increasingly higher temperatures of the water. Increasingly high air temperatures are melting the sea ice and, where the sea ice is gone, they are warming up the water directly. 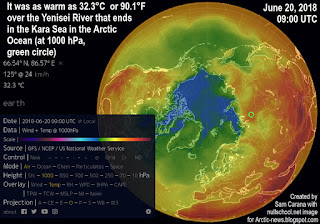 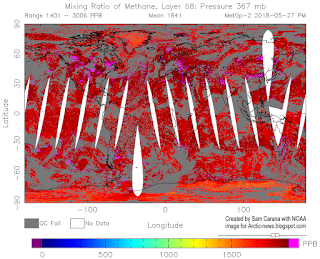 High air temperatures are also warming up the water from rivers flowing into the Arctic Ocean, as illustrated by the left panel of above image.

On June 20, 2018, it was even warmer, as the image on the right shows. It was as warm as 32.3°C or 90.1°F at 1000 hPa over the Yenisei River that ends in the Kara Sea in the Arctic Ocean (green circle). It was actually even warmer at surface level, but just look at the temperatures on the image over Greenland and the Tibetan Plateau at 1000 hPa. See also this post. 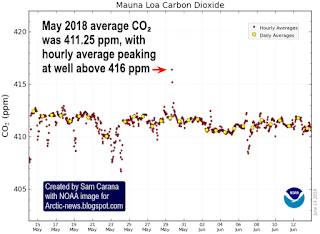 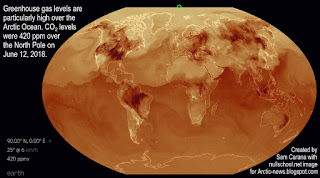 Mean global methane level was as high as 1880 ppb on June 15, 2018, at 254 mb, further confirming that more methane is increasingly accumulating at greater heights in the atmosphere.

NOAA records show that the average May 2018 CO₂ level was 411.25 ppm at Mauna Loa, Hawaii, while the hourly average peaked at well above 416 ppm. 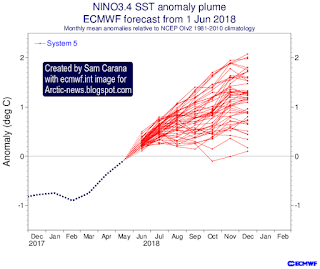 "CO₂ levels are continuing to grow at an all-time record rate because burning of coal, oil, and natural gas have also been at record high levels,” said Pieter Tans, lead scientist of NOAA's Global Greenhouse Gas Reference Network in a news release. "Today's emissions will still be trapping heat in the atmosphere thousands of years from now."

Greenhouse gas levels are particularly high over the Arctic Ocean. CO₂ levels were 420 ppm over the North Pole on June 12, 2018.

The situation is getting even more critical as we've left the La Niña period behind and are now moving into an El Niño period, as illustrated by the images on the right and below.

A further danger is that earthquakes can be triggered as more ice is melting on Greenland, as discussed earlier in posts such as this one and this one. Earthquakes can send out strong tremors through the sediment and shock waves through the water, which can trigger further earthquakes, landslides and destabilization of methane hydrates. The situation is especially dangerous when combined with extreme weather events that can cause cracks and movement in sediments. The image below shows earthquakes that hit the seas around Greenland between May 30, 2018, and June 17, 2018. 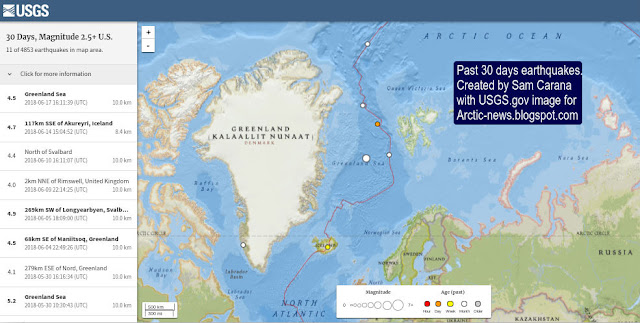 Given the above, it's amazing that the IPCC in its 'final draft 1.5°C report' insists that "If emissions continue at their present rate, human-induced warming will exceed 1.5°C by around 2040" (according to a recent Reuters report). The final draft is now going to governments for their scrutiny, with the danger that the dire situation may be watered down even further.


Governments should be urged to confirm that temperatures could rise dramatically over the next few years. Accordingly, comprehensive and effective action needs to be taken, as described at the Climate Plan page.