Ecological Statement on the Future of Earth

The following statement was initiated by John B. Davies, in the hope that it will also be signed by many climatologists, ecologists and anyone who is similarly concerned about climate catastrophe, and given wide media coverage. The statement reflects the views of signatories personally, rather than the views of organizations they may be associated with, hence the links to personal pages such as at facebook and Google+. Nonetheless, businesses, groups and organizations are equally invited to join this call for action. Add your name and copy this statement widely!

ECOLOGICAL STATEMENT ON THE FUTURE OF THE EARTH

Life on earth is facing a profound crisis.

Human industrial society has impacted life on earth in multitudes of ways especially through the vastly increased greenhouse gas concentration of the atmosphere. Trade and rapid transport around the earth are introducing invasive species everywhere. New bacteria and micro biological life are being moved to areas in which they did not previously live causing new diseases for animals and plants. Forests are being lost globally adding to the carbon concentration of the air and causing many species to go extinct.

No later than 2050, and probably much sooner, global temperatures will have risen significantly. Farming will be nearly impossible in an unstable global climate and ecosystem. There will be large scale loss of species as a result of a collapsing global ecosystem.

There will probably have been a collapse of the global economy before 2050, which may come as almost a sudden event or could occur over a decade or two. This will probably lead into a political and societal collapse with far fewer people surviving on the planet in very inhospitable circumstances.

Human society is not reacting to the situation effectively because most nations and industries, but not all, make strenuous efforts to protect the living planet but because it is so costly our society does far from all that is absolutely necessary and then just hopes for the best.

The situation is far from hopeless if we react now. However, if humanity does not react to this crisis almost immediately, then global ecological collapse and the collapse of human civilisation before 2050 is almost inevitable. Most of the worst damage can still be avoided. However once the situation starts to deteriorate rapidly there will be no way in which it can be slowed or reversed, we will be doomed. 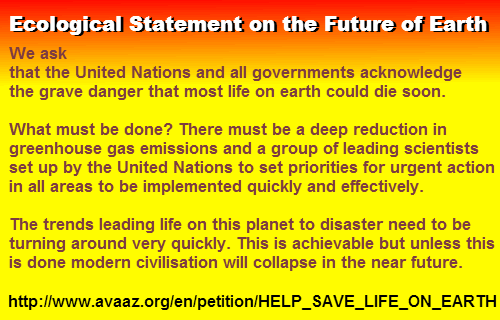 The first priority is for all governments and most people to acknowledge the grave crisis the earth is facing almost immediately because only then can humanity react effectively.

Secondly there needs to be a statement in general terms of what must be done. The two most important actions contained within the statement are a deep reduction in greenhouse gas emissions very quickly which will affect the wealthy nations more than others and very wealthy people more than poorer people. This may mean a global economic contraction. Secondly a group of leading scientists needs to be set up under the authority of the United Nations to set the priorities for urgent action in all other areas. These actions need to be implemented very quickly and with great determination so that they are effectively applied. Many areas, especially the arctic, are in a critical situation.

The trends which are leading life on this planet to disaster need to be shown to be turning around very quickly. This is achievable but unless this is done very quickly modern civilisation will collapse in the near future.