Albedo change in the Arctic threatens to cause runaway global warming

Mark Flanner et al. calculated in 2011 that snow and ice on the Northern Hemisphere had a combined cooling effect of 3.3 Watts per square meter (of which 2 W/sm relates to the snow cover on land and 1.3 W/sm to the sea ice).

This cooling effect is deminishing rapidly, as temperatures rise and snow and ice cover declines. Snow and ice on the Northern Hemisphere had already declined substantially over the years and was reflecting 0.45 watts less energy per square meter in 2011 than it did in 1979 (Flanner, 2011).

As discussed in Albedo change in the Arctic, Professor Peter Wadhams calculates that the loss of the Arctic sea ice cooling effect alone can be compared to the net global warming caused by people's emissions (1.66 W/sm, IPCC, 2007b).

The exponential trends added by Wipneus to PIOMAS Arctic sea ice volume data show that the Arctic Ocean looks set to be ice-free from 2015 onwards for the period from August through to October, while July and November look set to follow from 2017, respectively 2018 onwards with June following closely thereafter. In other words, we could soon face an Arctic Ocean that is ice-free for half the year.

Snow cover on land takes up an even larger area than sea ice. The chart below illustrates the decline of snow cover on land in the Northern Hemisphere (without Greenland) for the month June. 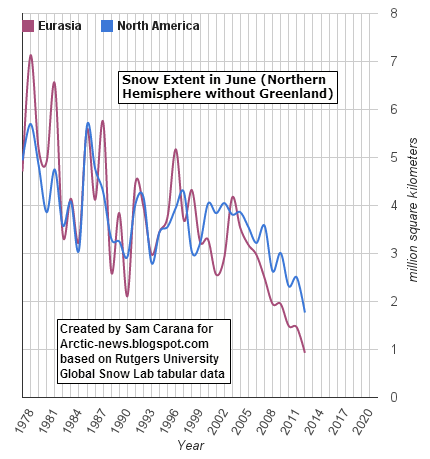 What trends could fit these data? On the image below, I've added trendlines and I encourage others to come up with better ones. 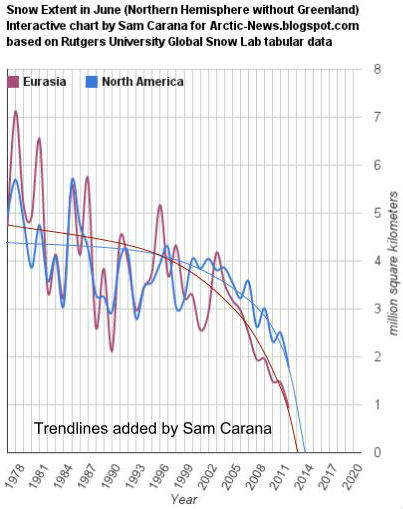 Clearly, a lot of snow and ice looks set to disappear over the next few years. Note that what happens in winter doesn't matter as much, as little sunlight reaches the Arctic in winter. What matters most is how much sunlight is reflected when insolation in the Arctic is high. Insolation during the months June and July is higher in the Arctic than anywhere else on Earth, as shown on the image below, by Pidwirny (2006).

While Greenland remains extensively covered with snow and ice, the reflectivity of its cover shows rapid decline, as illustrated by the image below. The July data since 2000, from the meltfactor blog with projection in red added by Sam Carana, suggest a exponential fall in reflectivity that looks set to go into freefall next year.


A drop of as little as 1% in Earth’s albedo corresponds with a warming roughly equal to the effect of doubling the amount of carbon dioxide in the atmosphere, which would cause Earth to retain an additional 3.4 watts of energy for every square meter of surface area (NASA, 2005; Flanner et al., 2011).

Combined, the snow line retreat, loss of sea ice and decline of Greenland's reflectivity constitute a huge loss of summer cooling in the Arctic.

As a result, summer temperatures in the Arctic look set to rise rapidly over the next few years, threatening to unleash massive amounts of methane from sediments below shallow waters of the Arctic Ocean, spiraling Earth into runaway global warming. 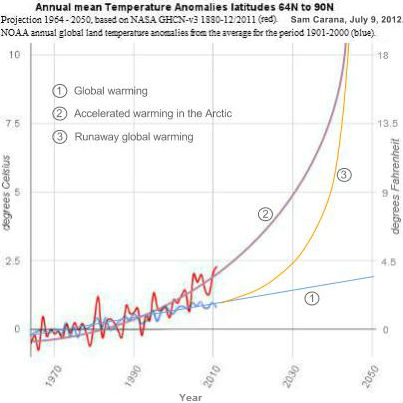 - Flanner et al. (2011), Radiative forcing and albedo feedback from the Northern Hemisphere cryosphere between 1979 and 2008.
nature.com/ngeo/journal/v4/n3/full/ngeo1062.html