By Sam Carana and Patrick McNulty

Comprehensive climate action will do more than just cutting emissions, it will also take further action, as pictured in the image below.

Taking a broad perspective makes it easier for proposed projects to be assessed on their benefits in a multitude of areas.

Ocean tunnels can capture vast amounts of energy from ocean currents, such as the Gulf Stream and the Kuroshio Current. These locations are close to areas with high energy demand, such as the North American East Coast and the coast of East Asia, which can reduce the need for long distance transmission lines.

Ocean tunnels provide clean energy continuously, i.e. 24 hours a day, all year long. This makes that they can satisfy demand for electricity both at peak and off-peak usage times.

Ocean tunnels can generate electricity in two ways, i.e. by capturing the kinetic energy contained in the flow of ocean currents, and by means of Ocean Thermal Energy Conversion (OTEC) using temperature differences between cooler deeper parts of the ocean and warmer surface waters to run a heat engine to produce energy.


Besides generating energy, ocean tunnels can assist with further activities, which will increase the value of ocean tunnels in the fight against climate change. Such activities include the following:


The video below is narrated by Dave Borlace and describes Ocean Mechanical Thermal Energy Conversion, the method conceived and developed by Patrick McNulty to generate electricity while cooling the ocean surface in the path of ocean currents such as the Gulf Stream. 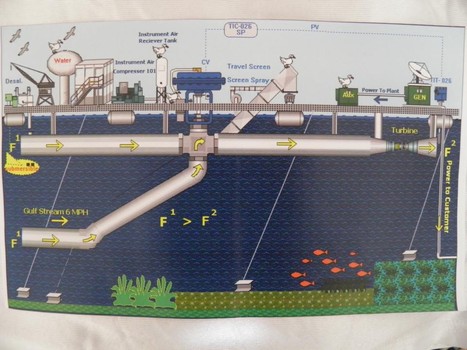