How long do we have?

The March 2019 temperature is in line with an earlier analysis that 2019 could be 1.85°C warmer than preindustrial and that a rapid temperature rise could take place soon, as illustrated by the image below. 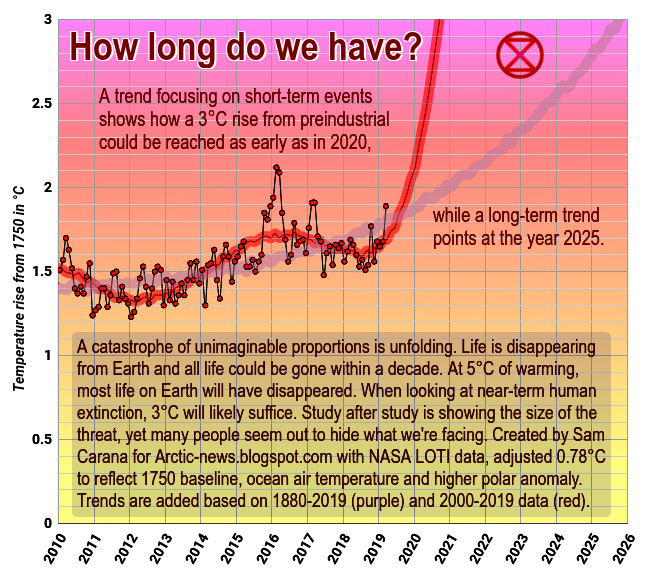 A catastrophe of unimaginable proportions is unfolding. Life is disappearing from Earth and all life could be gone within a decade. At 5°C of warming, most life on Earth will have disappeared. When looking at near-term human extinction, 3°C will likely suffice. Study after study is showing the size of the threat, yet many people seem out to hide what we're facing.

Above image asks 'How long do we have?' The image is created with NASA LOTI data, adjusted 0.78°C to reflect a 1750 baseline, ocean air temperature and higher polar anomaly. Trends are added based on 1880-2019 (purple) and 2000-2019 data (red). The long-term purple trend points at 2025 as the year when 3°C rise from preindustrial could be crossed, while the red trend that focuses on short-term events shows how a 3°C rise from preindustrial could be reached as early as in 2020.

The chart below shows elements contributing to the warming, adding up to a rise of as much as 18°C by 2026. 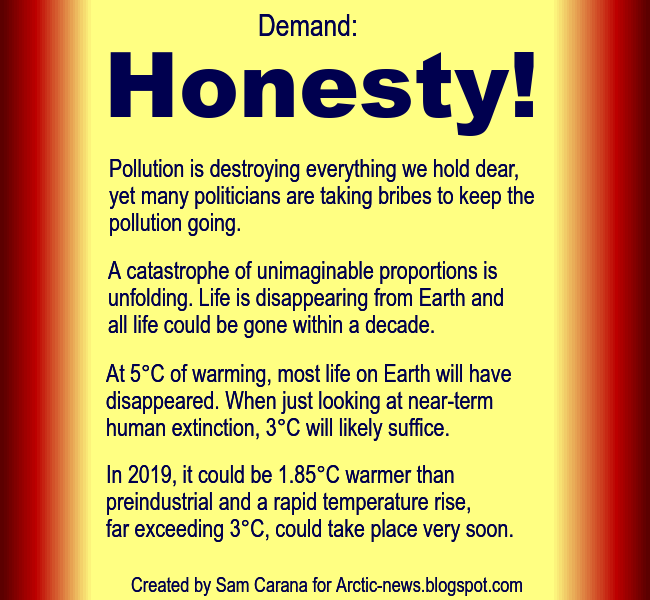 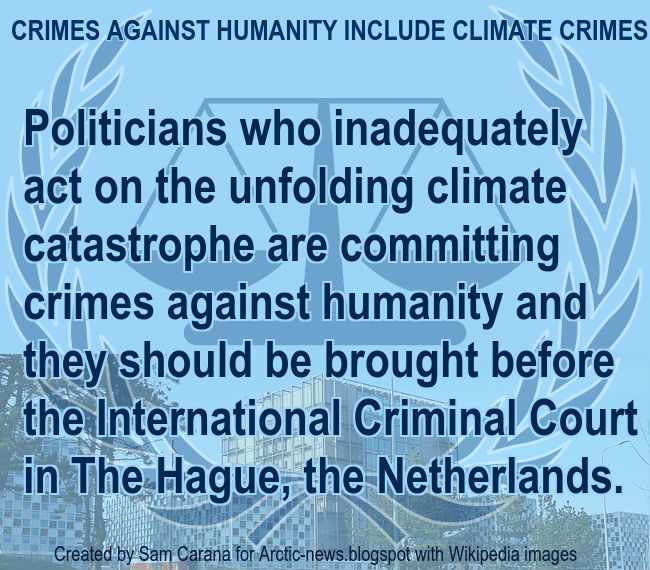 As Winds Start To Growl 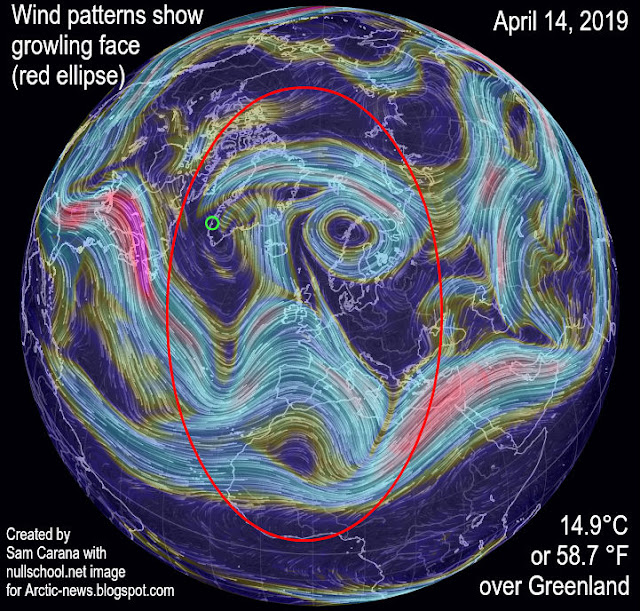 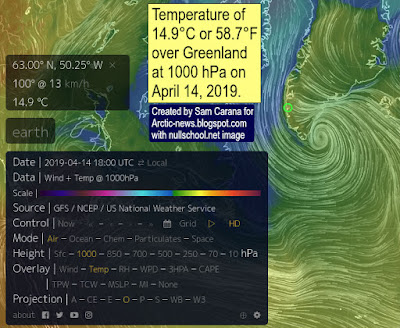 On April 14, 2019, wind patterns over the North Atlantic resembled a growling face, as highlighted by the red ellipse on the image.

On the left, the image shows winds at 250 hPa dipping over the U.S., enabling cold winds to descend deep down over North America.

Temperatures in Colorado that day were as low as -13.5°C or 7.6°F, as illustrated by above image.

The map below shows the jet streams stretched out from North Pole to South Pole, while the jet stream is also crossing the Equator over the Pacific Ocean. 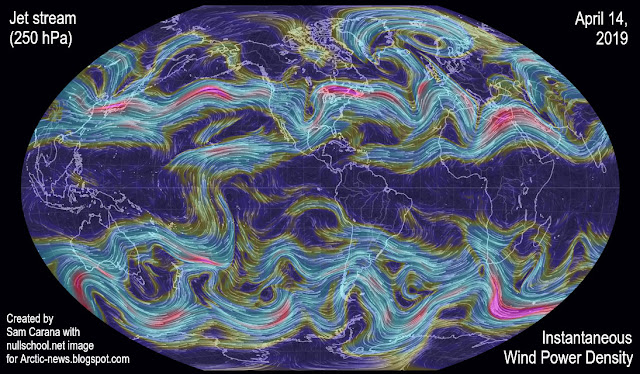 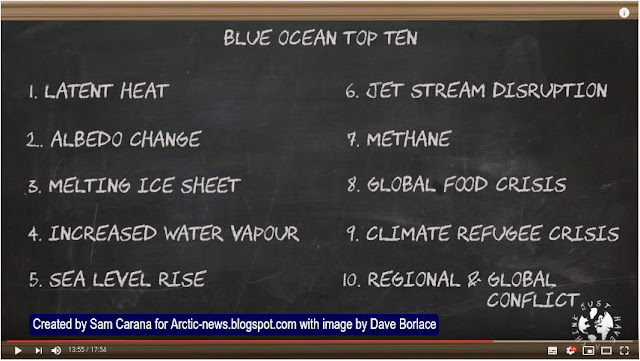 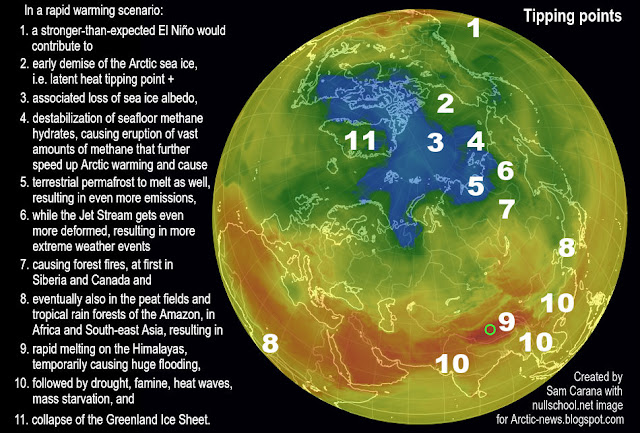 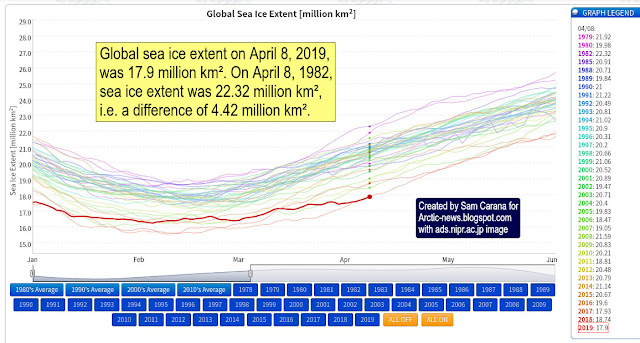 An infinite scream passing through nature

Wind patterns on March 30, 2019, resembled what Edvard Munch wrote in his diary in 1892, i.e. "I sensed an infinite scream passing through nature", a feeling Munch expressed in his iconic artwork The Scream, part of which is added on the right in above image. 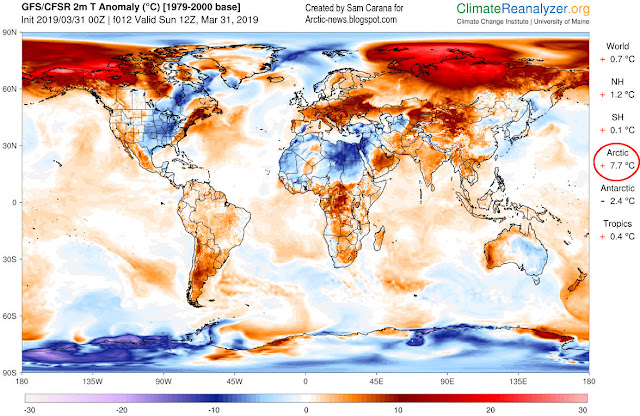 What caused this to eventuate? Firstly, as the Arctic is warming faster than the rest of the world, the temperature difference between the North Pole and the Equator is narrowing, which is slowing down the overall speed at which the jet stream is circumnavigating Earth, while it also is making the jet stream wavier, enabling warm air from the Atlantic Ocean and Pacific Ocean to more easily enter the Arctic, while also enabling cold air from the Arctic to more easily descend over Asia and North America.

At the same time, global warming is making oceans warmer. Sea surface temperatures were high in the path of the jet stream on March 15, 2019, as above image shows. The sea surface was 10.8°C or 19.4°F warmer than 1981-2011 at the green circle in the left panel of above image. On that day, surface air temperature there was as high as 7.9°C or 46.2°F, and there were cyclonic wind patterns, as the right panel of above image shows. 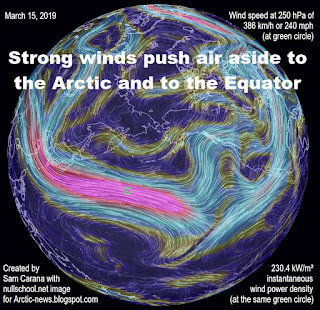 High sea surface temperatures are causing winds over oceans to get much stronger than they used to be at this time of year.

The image on the right shows that, on March 15, 2019, the jet stream reached speeds as high as 386 km/h or 240 mph at the green circle. These stronger winds then collide at high speed with the air in front of them. This collision occurs with an even greater force, due to low temperatures over North America and due to the lower overall speed at which the jet stream circumnavigates Earth. All this makes that air gets strongly pushed aside toward the Arctic and the Equator.

On March 30, 2019, strong winds pushed warm air into Bering Strait, resulting in temperatures as high as 2.5°C or 36.4°F, as the image below illustrates. 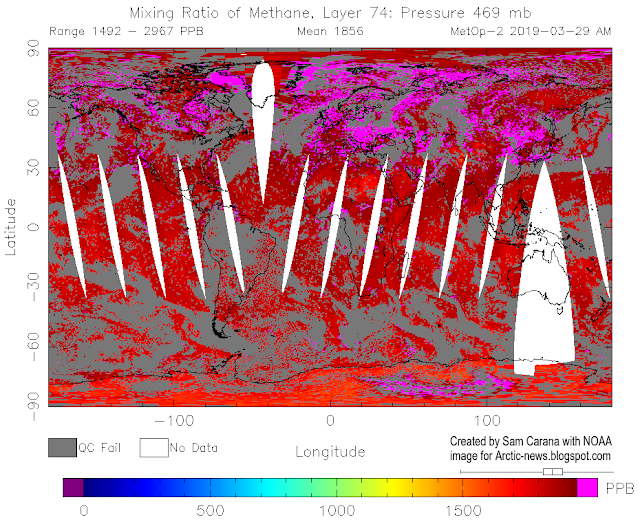 With Arctic sea ice extent this low and with temperatures rising relentlessly, fears are that the sea ice won't be able to act as a buffer to absorb heat for long, and that a strong influx of warm, salty water will reach the seafloor of the Arctic Ocean and trigger methane eruptions from destabilizing hydrates.