Abrupt climate change and your delegation of responsibility

Everyone reading this most likely knows that the ice in the Arctic is melting – much faster and sooner than expected or predicted a few short years ago. Many of you may know that within only years it will all be gone during summer and that the physics of the earth system dictates that this is a truly fundamental and far reaching change for a number of reasons grounded in basic physics – albedo and latent heat to name two in particular.


Some of you may also be aware of the poorly understood but potentially even more catastrophic threat posed to the earth system by methane clathrates – and a few of you may be aware of the significant and growing list of positive feedbacks that are now underway and moving closer to dramatic and abrupt step changes. We know – whether you think it will take five years or fifty years – that our interdependent and logistically complex civilization is on track to face unprecedented challenges that history teaches us have an excellent chance of destroying it. We also know that the foundations for civilization will be destroyed in the foreseeable future – the stable benign climate that nourished us for the last ten thousand years will be gone for the rest of human history if truly dramatic actions are not taken immediately.

While I have some appreciation for how fundamental and serious this situation is – this is not a point I intend to dwell upon. I would like instead to talk about psychology – particularly yours.

While I am sure some people who read this may be already doing extraordinary things to try to address the situation – it seems a fair assumption to me that most will not be. Too many people are satisfied to wring their hands about the hopelessness of the situation and to become absorbed by the idea of their personal powerlessness. They look to the leaders of the political and corporate worlds to protect their own interests while perhaps failing to understand that these people look after their own interests first and foremost. The person best able to look after your interests is usually – you.

Too many people want to believe that a token sacrifice is enough to be able to say they did their bit to save themselves and the children of the world from hell on earth. Unfortunately using energy efficient light bulbs, recycling and offsetting carbon dioxide for flights and things is not enough to fundamentally change the situation. It is a good start and should be lauded as such – but even if everyone did these things – we are still damned – and therefore must appreciate that a greater effort is required.

What I want to do is to talk about personal responsibility. The actions of the collective masses of society including corporations and politicians start with individuals. If you cannot act proportionately to the problem to look after yourself and your family if you have one – how can you expect other people to do so?

My basic point therefore is that most people, even well informed people, are not acting to address the problem proportionately to the severity of the problem.

My second observation is that many people immediately destroy their own chances of greater action by various excuses that they use to destroy their effectiveness before they even tried. There is no surer route to failure than to never try in the first place!

If someone suggests to you that you communicate your concerns regularly to politicians and corporations by using telephones, letters and internet forums – do you start to do this or do you say that your voice is too little and that it would be a waste of time? Imagine for a moment the difference between everyone assuming it is a waste of time and countless millions of people deluging those with the power in our society with their demands?

If someone suggests you go on protests and demonstrations to highlight the issue and face arrest – do you say that you can’t take that risk, implicitly saying that you do not think the cause merits it? It is easy for the authorities to arrest a few hundred people – but again – they cannot arrest millions.

Do you tell people that the mess cannot be fixed and that geoengineering is bound to fail because we already made so many mistakes as a species? Do you justify ignoring the problem as you are happy to conclude it is hopeless and insoluble? If so, do you accept the idea that you are actively condemning yourself and your family and other people around you with whom you could cooperate to realize a better chance of a future – if only you stopped being defeatist from the outset?

I am saying that now is an excellent time to take stock and to realize that the keys to defeat and therefore victory lie first and foremost in your own mind.

I am not giving a prescription for any specific action – merely to point out that almost everyone reading these words can act more on these issues.

Here are a few notable examples of people I would say are acting in ways many people would conclude to be impossible and dismiss even the thought of attempting:

The author of this blog (http://jasonexplorer.com/about/ ) travelled all around the world using only muscle power taking over 13 years and travelling over 46,000 miles. He started as a virtually unemployed window cleaner and made it an awe inspiring platform from which to talk about sustainability.

Then there is the author of this blog (http://climate-change-action-plan.blogspot.com/ ) and many other blogs working tirelessly and without personal reward to educate and inform people. He makes sure not only to explain how serious the problem is but also to inform people of the solutions that we may still have a tiny amount of time left to implement to provide a collective hope for the billions of people living today.

Finally there is the author of this blog (http://deusjuvat.wordpress.com/about/ ), who is working on a plan that tries to face the consequences of civilization failing and promoting an aspiration to ensure that even in the very worst outcomes there remain some hopes for a future for our species. This starting from a position as a minimum wage worker.

Please consider seriously – what can you do?

Never underestimate what one person can do.

The image below, from the ArctischePinguin site, shows the current volume of Arctic sea ice, updated with PIOMAS data from the Polar Science Center of the University of Washington. 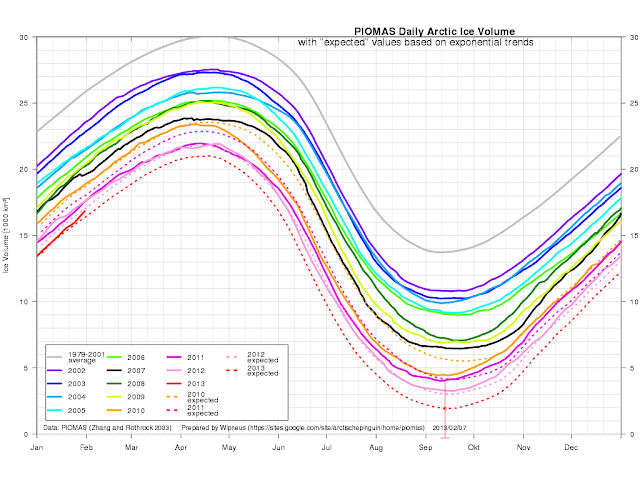 As the above image shows, a minimum volume of 3000 cubic km is expected to be reached in September 2013 (red dotted line), with a margin of error that allows for the sea ice to disappear altogether in a few months time.

The image below updates the exponential trends for each month. 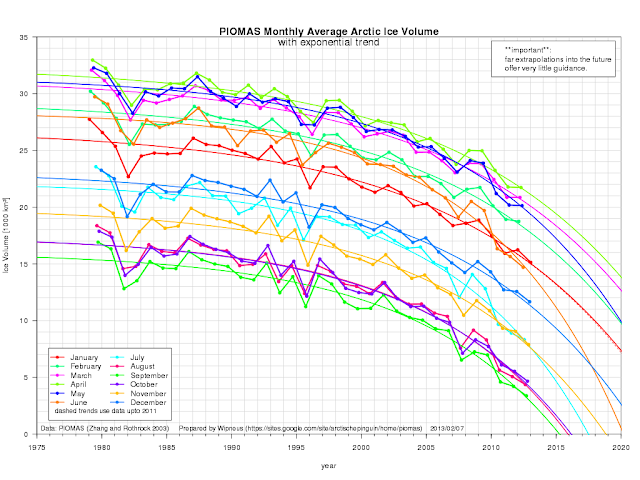 Meanwhile, the National Snow and Ice and Data Center (NSIDC) has started a page with daily updates of the extent of the Greenland melt. The image below pictures the Greenland melt in 2012 on the left, and the situation up to February 6, 2013 on the right. 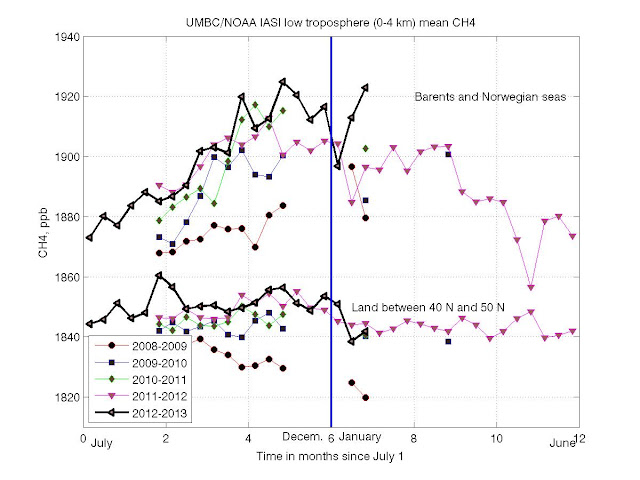 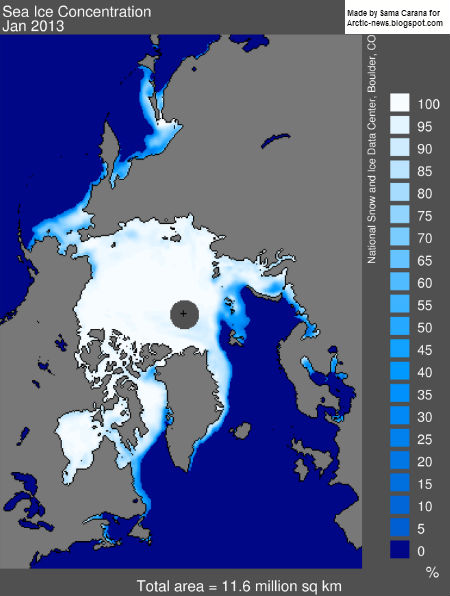