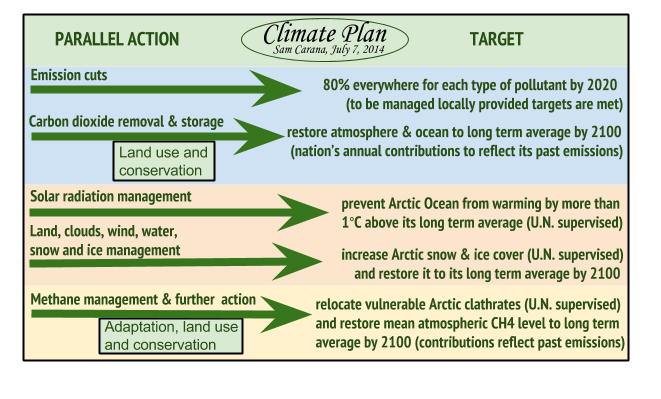 This image sums up the lines of action, to be implemented in parallel and as soon as possible, and targets of the Climate Plan, in order to avoid climate catastrophe.

The Climate Plan and its various parts have been discussed in many post at Arctic-news blog over the years.

Now is the time to support the Climate Plan and to make sure that it will be considered at many forums, such as the Climate Summit, to be held September 23, 2014, at the U.N. Headquarters in New York, and preparations for the UNFCCC Climate Change Conference in Paris in 2015.

Please show your support by sharing this text and the image widely!

In nations with both federal and state governments such as the U.S., the President (or Head of State or Cabinet, basically where executive powers are held) can direct:
Similar policies could be adopted elsewhere in the world, and each nation could similarly delegate responsibilities to states, provinces and further down to local communities.

Energy feebates can best clean up energy, while other feebates (such as pictured in the above diagram) can best raise revenue for carbon dioxide removal. Energy feebates can phase themselves out, completing the necessary shift to clean energy within a decade. Carbon dioxide removal will need to continue for much longer, so funding will need to be raised from other sources, such as sales of livestock products, nitrogen fertilizers and Portland cement.

There are methods to remove carbon dioxide from the atmosphere and/or from the oceans. Rebates favor methods that also have commercial viability. In case of enhanced weathering, this will favor production of building materials, road pavement, etc. Such methods could include water desalination and pumping of water into deserts, in efforts to achieve more vegetation growth. Selling a forest where once was a desert could similarly attract rebates.

Some methods will be immediately viable, such as afforestation and biochar. It may take some time for methods such as enhanced weathering to become economically viable, but when they do, they can take over where afforestation has exhausted its potential to get carbon dioxide back to 280ppm.

Additionally, conservation and land use measures could help increase carbon storage in ecosystems.

Apart from action to move to a more sustainable economy, additional lines of action are necessary to reduce the danger of runaway global warming.

Extra fees on international commercial aviation could provide funding for ways to avoid that the temperature of the atmosphere or the oceans will rise by more than 1°C above long term average.

Due to their potential impact across borders, these additional lines of action will need ongoing research, international agreement and cooperation.

Land, clouds, wind, water, snow and ice management
Apart from action to move to a more sustainable economy, additional lines of action are necessary to reduce the danger of runaway global warming.

Extra fees on international commercial aviation could also provide funding for ways to cool the Arctic and restore the snow and ice cover to its long term average extent.

As said, due to their potential impact across borders, these additional lines of action will need ongoing research, international agreement and cooperation.

Further action is needed to avoid that huge quantities of methane will abruptly erupt from the seafloor of the Arctic Ocean.

Vulnerable hydrates should be considered to be relocated under U.N. supervision.

Besides this, local action can be taken to reduce methane levels in the atmosphere with each nation's annual contributions to reflect its past emissions.

Adaptation, conservation and land use measures could further improve the situation.