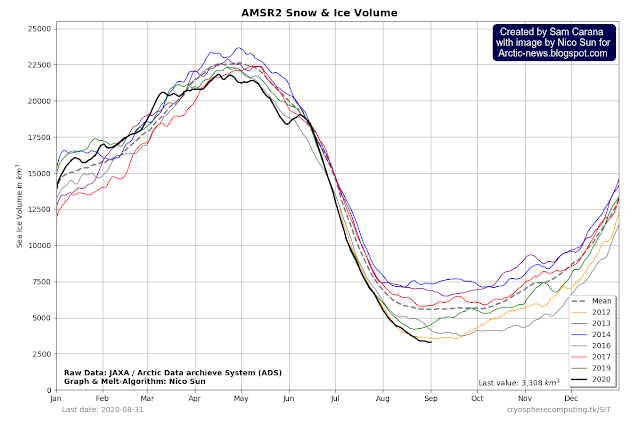 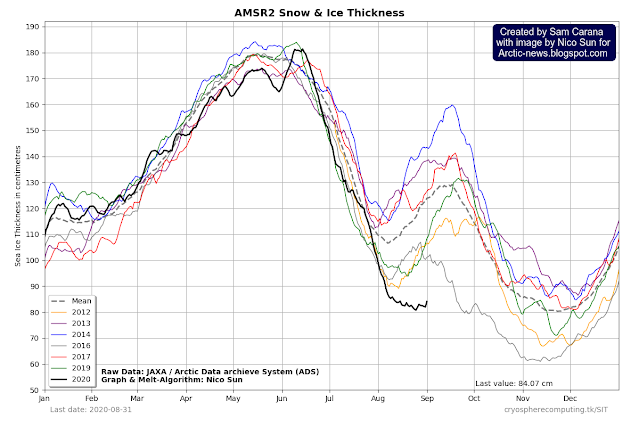 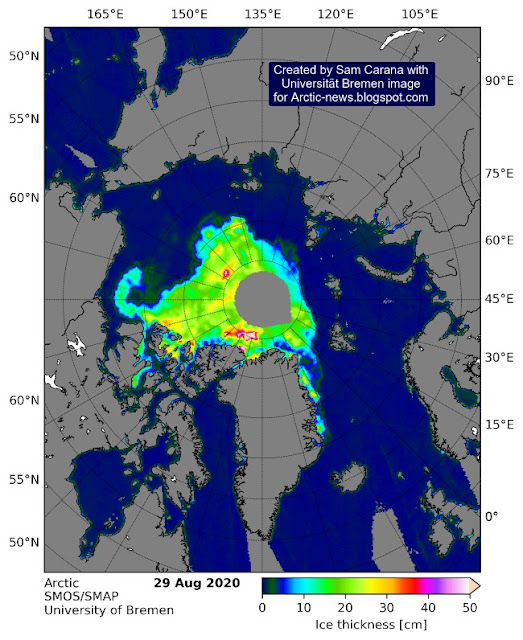 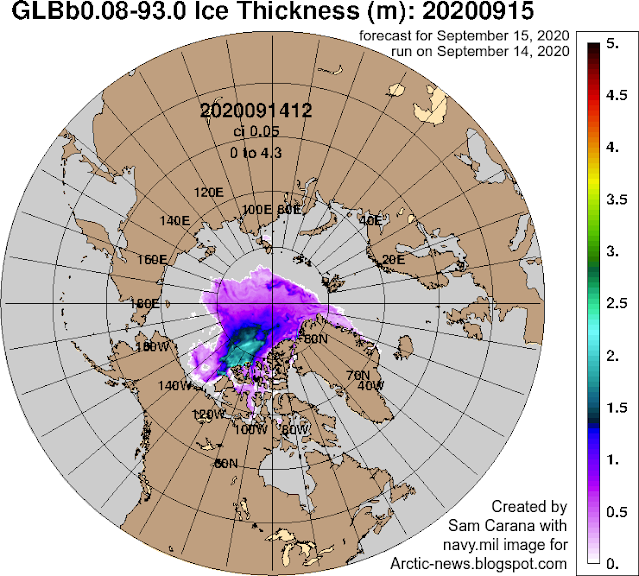 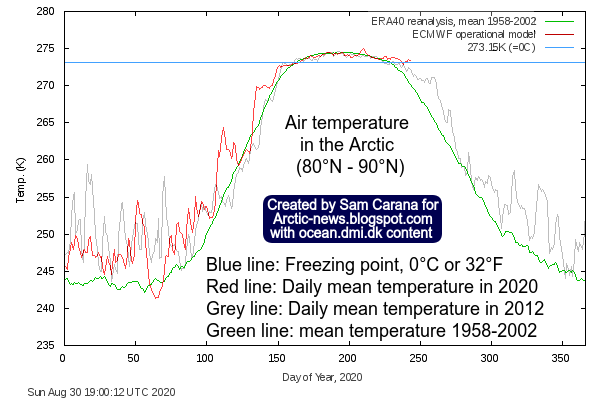 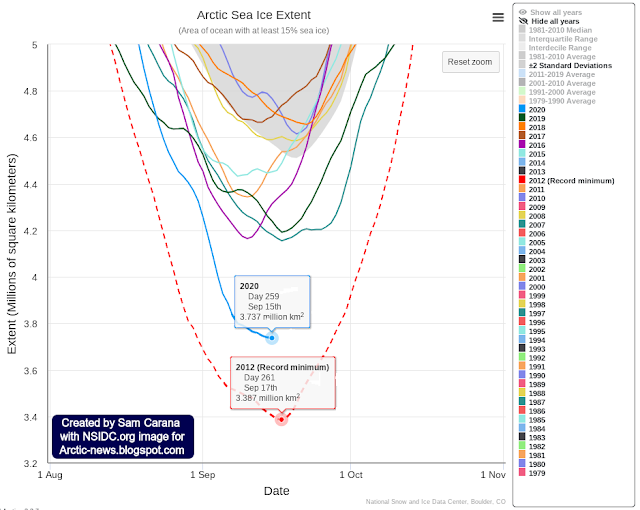 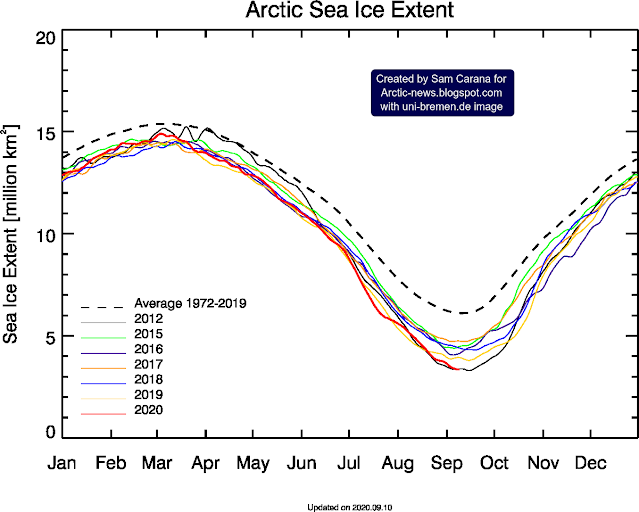 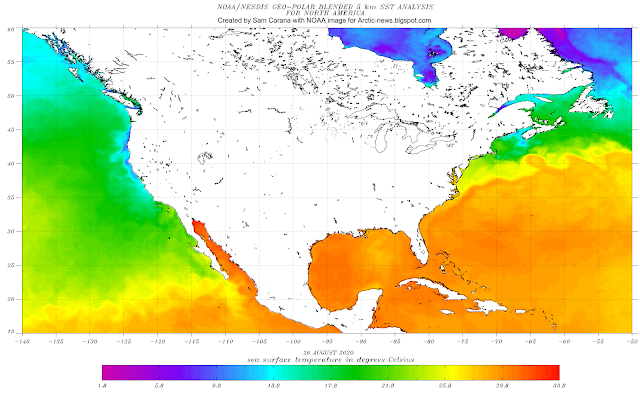 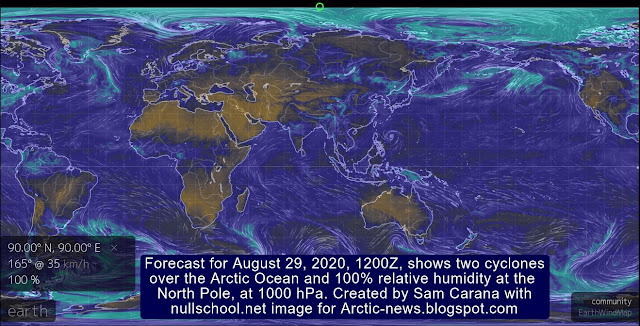 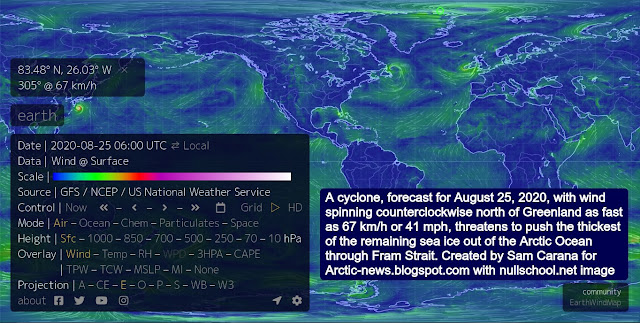 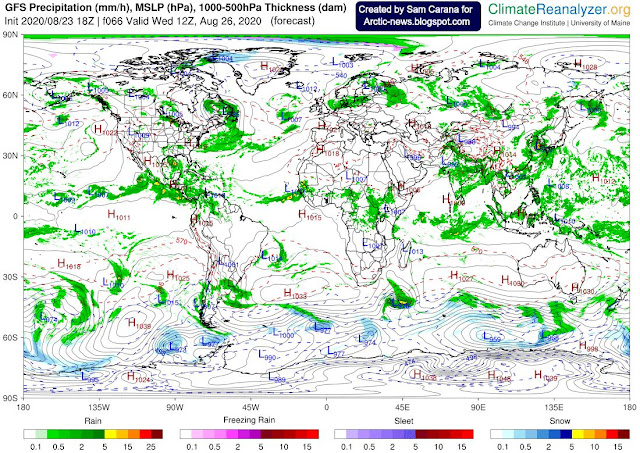 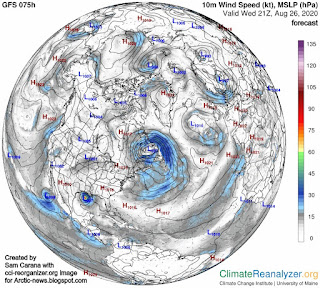 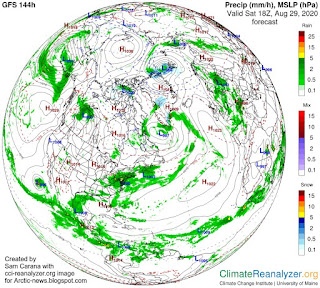 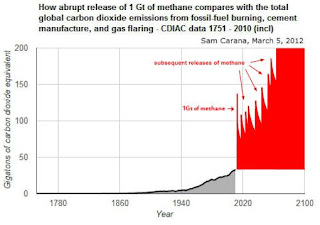 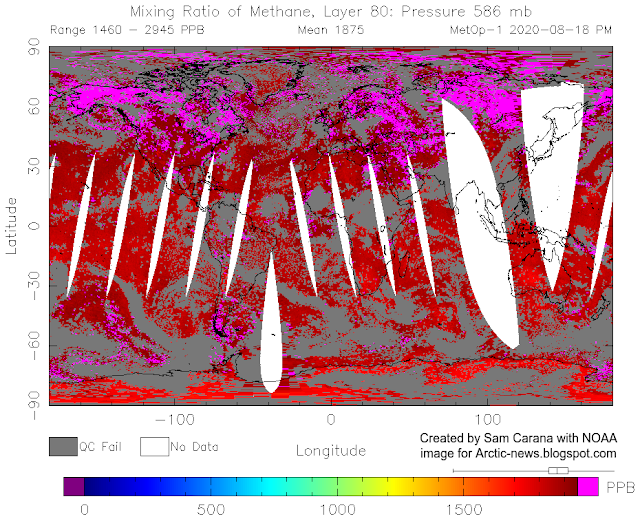 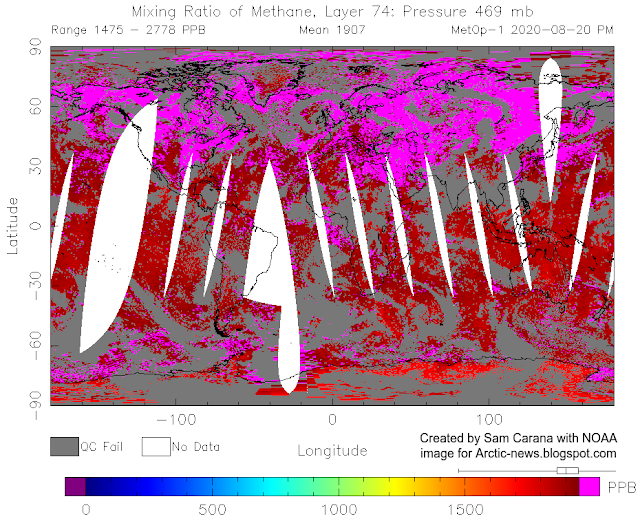 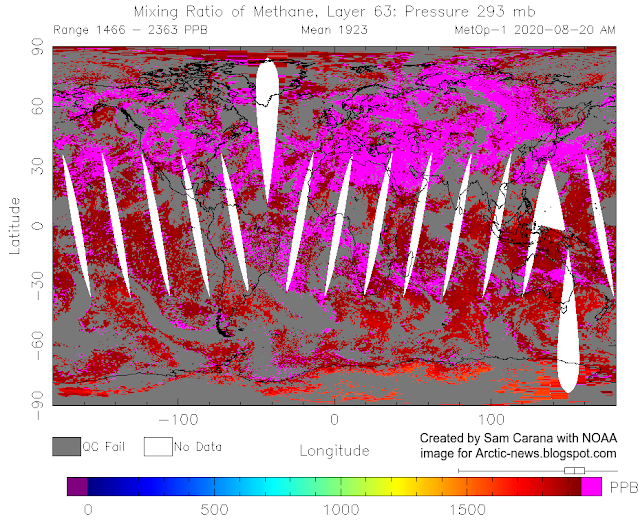 Will there be open water at the North Pole in August 2020?

On the image at the left, the center of the Arctic Basin (pale-blue) still has a sea surface temperature below 0°C (or 32°F).

Seawater will freeze and stay frozen at about −2 °C (28 °F). The sea surface of the Arctic Ocean contains less salt, so the sea ice will stay frozen longer, even as temperatures rise, but it will melt at 0°C (or 32°F).

As the images show, the blue area where sea surface temperatures are at or above 0°C (or 32°F), is encroaching upon the pale-blue area at the center of the Arctic Basin, and appears to reach the North Pole at August 9, 2020.

Hat-tip to Albert Kallio for pointing at this. 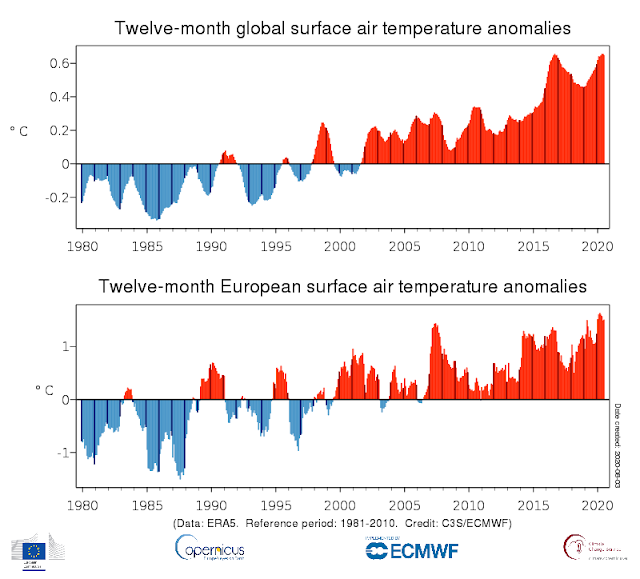 Above combination image shows the running twelve-month averages of global-mean (top) and European-mean (bottom) surface air temperature anomalies relative to 1981-2010, based on monthly values from January 1979 to July 2020. 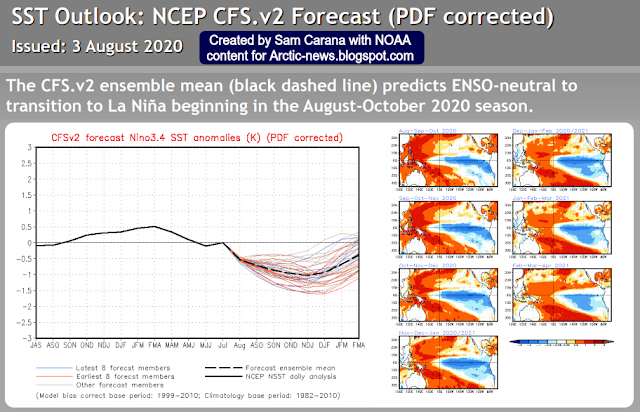 The image below shows surface temperatures as high as 6.1°C or 42.9°F north of Greenland for August 7, 2020, with wind coming from the south-east. 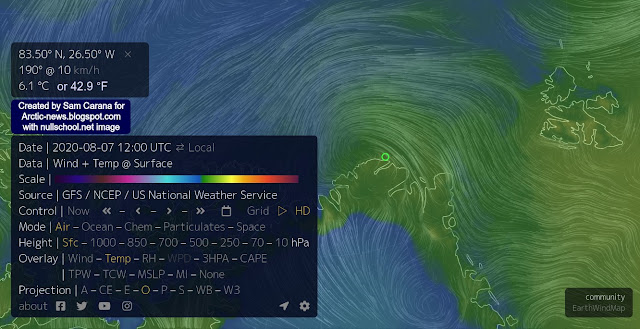 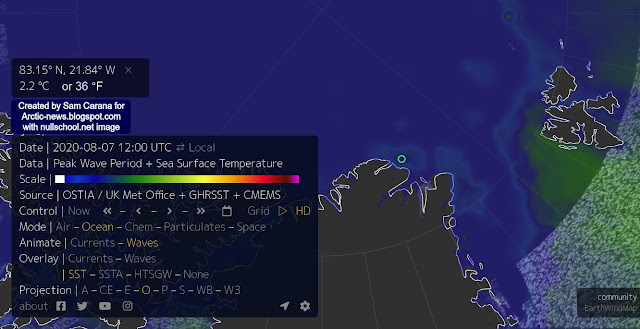 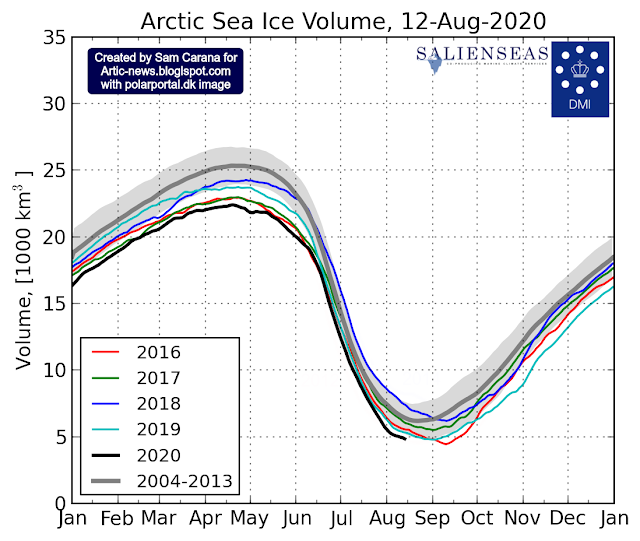 The dramatic decline of the sea ice becomes even more evident when looking at the fall in thickness. The navy.mil animation below was run on August 11, 2020, and shows sea ice thickness over 30 days (last 8 frames are forecasts for August 12 - August 19, 2020).

Remember that above 0°C, ice will melt. The water temperature of the Arctic Ocean underneath the sea ice is warmer, and this has been melting the sea ice from below. There still is a (rapidly thinning and shrinking) layer of sea ice at the surface of the Arctic Ocean, because until recently, air temperatures had remained low enough to maintain it, while it also takes time for the ice to melt. As long as there is ice, the heat will be consumed by the process of melting - once the ice is gone, temperatures will rise even more rapidly.

Relative humidity over this period was 69%, which means there was quite a bit of rain as well, further speeding up the melting.

The image below shows the ice at the northern tip of Greenland on August 6, 2020.

The image below shows ocean surface temperatures, with very high anomalies showing up where the sea ice has disappeared.

Above image also shows that the Arctic Ocean in many places is very shallow, which means that heat can quickly reach sediments at the seafloor, threatening to destabilize methane hydrates.

Methane levels are very high at the moment, the MetOp-1 sattelite recorded a mean methane level of 1917 ppb at 293 mb on August 4, 2020 pm, with high methane levels visible over the East Siberian Arctic Shelf (ESAS). 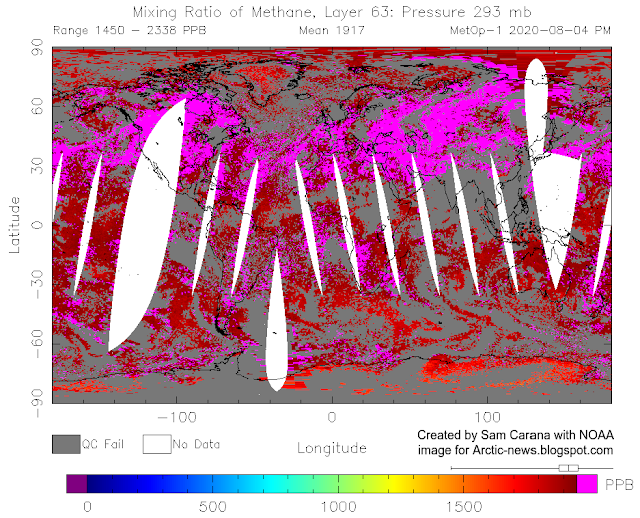 High methane levels were recorded over the Arctic Ocean by the MetOp-1 satellite on the morning of August 8, 2020, at 469 mb. 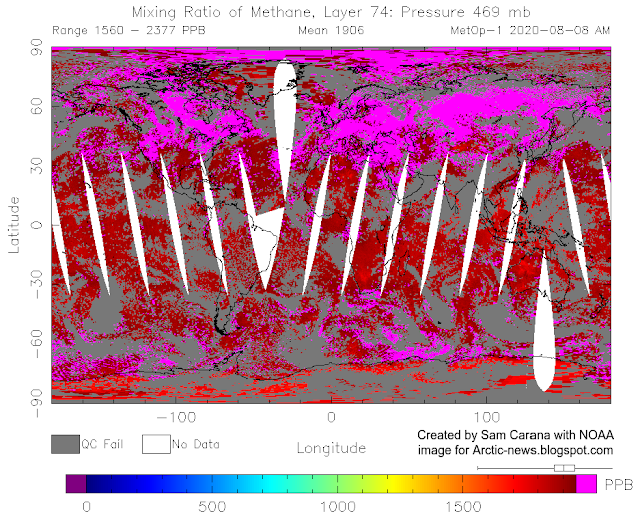