Methane hydrates: a volatile time bomb in the Arctic

The risk with climate change is not with the direct effect of humans on the greenhouse capacity of Earth’s atmosphere. The major risk is that the relatively modest human perturbation will unleash much greater forces. The likelihood of this risk is intimately tied to the developments over the next decade in the Arctic.

Whereas the term tipping point was initially introduced to the climate change debate in a metaphoric manner, it has since been formalised and introduced in the context of systems exhibiting rapid, climate-driven change, such as the Arctic. Tipping points have been defined in the context of earth system science as the critical point in forcing at which the future state of the system is qualitatively altered.

Tipping elements are defined, accordingly, as the structural components of the system directly responsible for triggering abrupt changes once a tipping point is passed. This is because they can be switched into a qualitatively different state by small perturbations. 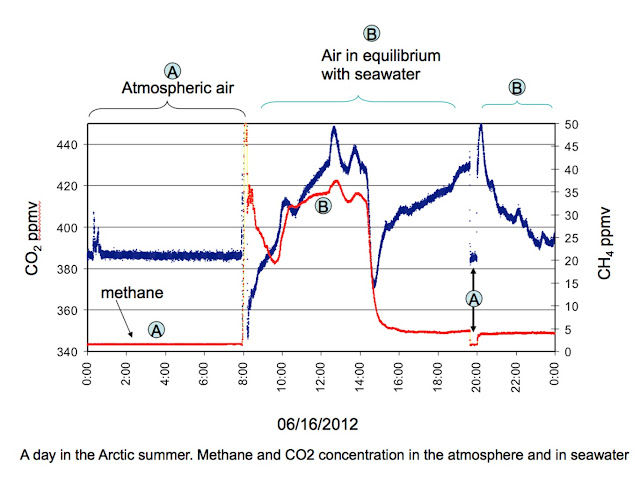 Of the many tipping elements in the Arctic, that with potentially greatest consequences if perturbed is the vast methane deposit. Methane is a greenhouse gas. A molecule of methane has 20 times the greenhouse effect of a CO₂ molecule, and the release of methane has been linked to climatic transitions along the history of planet Earth.

The Arctic contains vast reserves of methane stored as methane hydrate, a gel-like substance formed by methane molecules trapped in frozen water. The methane hydrate deposits are estimated at between 1,000 and 10,000 Gigatons (109 tons) of CO₂-equivalents as methane, much of which is present in the shallow sediments of the extensive Arctic shelves. This amount of greenhouse gas is several times the total CO₂ release since the industrial revolution.

Even moderate (a few degrees C) warming of the overlying waters may change the state of methane from hydrates to methane gas, which would be released to the atmosphere. If this release is gradual, methane will add a greenhouse effect to the atmosphere. This will only be temporary, as it will be oxidised to CO₂, with a decline in the greenhouse effect of 20-fold per unit carbon.

However, if the state shift is abrupt it may lead to a massive release of methane to the atmosphere, which could cause a climatic jump several-fold greater than the accumulated effect of anthropogenic activity.
Recent assessments have found bubbling of methane on the Siberian shelf. Models suggest that global warming of 3°C could release between 35 and 94 Gt C of methane, which could add up to an additional 0.5°C of global warming. Moreover, frozen soils and sediments contain large amounts of methane hydrates that can be released to the atmosphere. Indeed, rapid thawing of the Arctic permaforst has been reported to lead to the release of large amounts of methane.

In our most recent cruise this summer (June 2012) along the Fram Strait and Svalbard Islands we found concentrations of methane in the atmosphere of about 1.65 ppm. However our equilibrium experiments (air atmospheric with Arctic surface water) reached values that were generally between 2.5 ppm and 10 ppm, with maximum values up to 35 ppm. These results confirm that this area of the planet is emitting large amounts of methane into the atmosphere.

Understanding and forecasting the response of Arctic methane hydrate deposits to rapid warming and thawing in the Arctic is of the utmost importance.

Provided the magnitude of these risks, and those associated with other tipping elements in the Arctic, our collective response to climate change appears to be a careless walk on the razor edge.

Carlos Duarte receives funding from the Spanish Ministry of Economy and Competitiveness and the EU R&D 7th Framework Program to conduct research in the Arctic. He is affiliated, through a joint appointment, with the Spanish National Research Council (CSIC).

This article was originally published at The Conversation.
Read the original article.

Editor's note: For a discussion of the potency of methane compared to carbon dioxide, see the post Methane in the Arctic.

Posted by Sam Carana at 6:01 AM No comments: