Is the permafrost's integrity breaking down?

The chart below shows very high methane levels over Antarctica in April and May 2013. High levels of methane over Antarctica were recorded before in 2013, as described in an earlier post at the methane-hydrates blog. 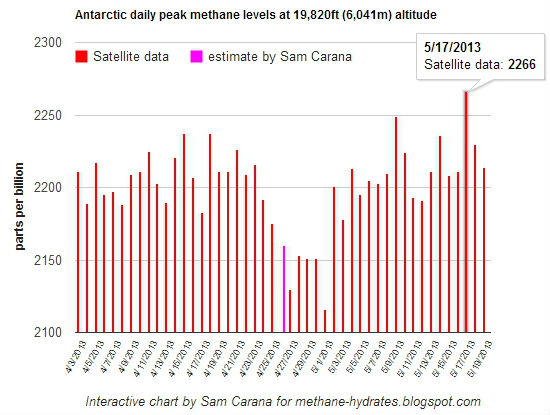 Meanwhile, a methane reading of 2475 ppb was recorded on April 26, 2013, appearing to originate from the Himalayan Plateau, as illustrated by the image below. 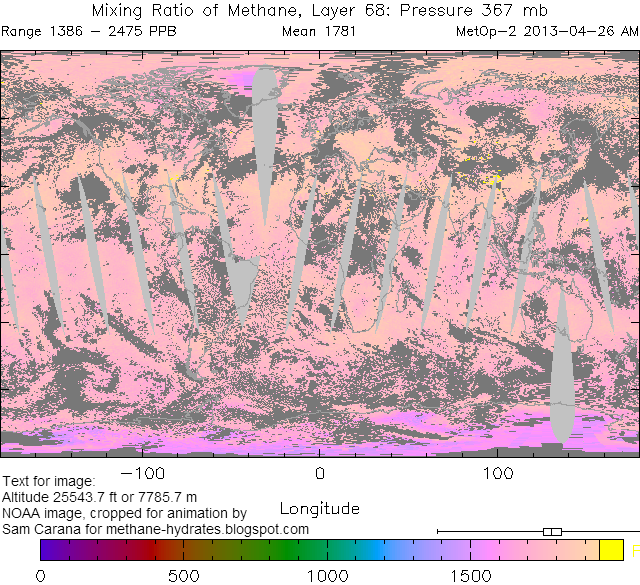 Recurring high readings could indicate that methane is bubbling up through the permafrost, both in Antarctica and on the Himalayan Plateau.

Loss of the integrity of the permafrost is particularly threatening in the Arctic, where the sea ice looks set to disappear within years, resulting in huge albedo changes in summer. Decrease of surface reflectivity results in increases in absorption of energy from sunlight and decreases in shortwave radiation in the atmosphere. The latter results in lower photo-dissociation rates of tropospheric gases. Photo-dissociation of the ozone molecule is the major process that leads to the production of OH (hydroxyl radical), the main oxidizing (i.e., cleansing) gas species in the troposphere. A 2009 NASA study projects this to lead to a decrease in OH concentrations and a weakening of the oxidizing capacity of the Arctic troposphere, further increasing the vulnerability of the Arctic to warming in case of additional methane releases.

Levels of greenhouse gases such as carbon dioxide and methane are already very high in the Arctic atmosphere, while large quantities of black carbon get deposited on snow and ice, further contributing to the albedo changes. This threatens to result in rapid summer warming of many parts of the Arctic Ocean with very shallow waters. Additionally, rivers can bring increasingly warm water into those shallow seas in summer, adding to the threat that heat will penetrate the seabed that contains huge quantities of methane. 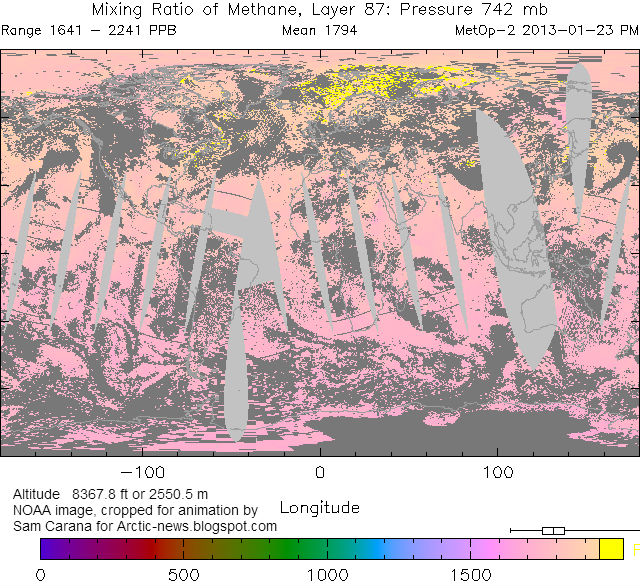 Above image, earlier included in an animation at the Arctic-news blog, shows methane concentrations on January 23, 2013, when a reading of 2241 ppb was recorded in the Arctic.

Analysis of sediment cores collected in 2009 from under ice-covered Lake El'gygytgyn in the northeast Russian Arctic suggest that, last time the level of carbon dioxide in the atmosphere was about as high as it is today (roughly 3.5 to 2 million years ago), regional precipitation was three times higher and summer temperatures were about 15 to 16 degrees Celsius (59 to 61 degrees Fahrenheit), or about 8 degrees Celsius (14.4 degrees Fahrenheit) warmer than today.

As temperatures rose back in history, it is likely that a lot of methane will have vented from hydrates in the Arctic, yet without causing runaway warming. Why not? The rise in temperature then is likely to have taken place slowly over many years. While on occasion this may have caused large abrupt releases of methane, the additional methane from such releases could each time be broken down within decades, also because global methane levels in the atmosphere were much lower than today.

In conclusion, the situation today is much more threatening, particularly in the East Siberian Arctic Shelf (ESAS), as further described in the earlier post methane hydrates.