Will August 2018 be the hottest month on record? 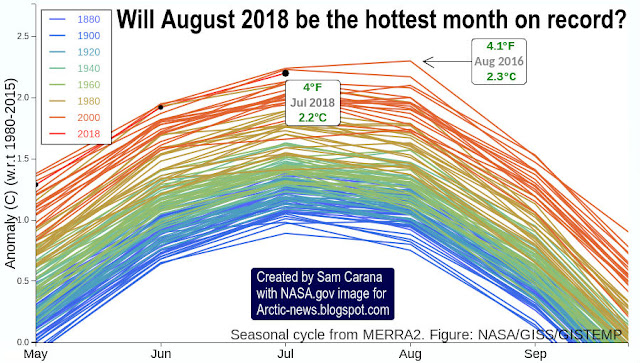 July and August are typically about 3.6ºC or 6.5ºF warmer than December and January. August is typically 1.8°C or 3.24ºF warmer than the average annual temperature. Above image shows how much higher the temperature was for selected months, compared to the annual global mean for the period 1980-2015. Will August 2018 be the hottest month on record? 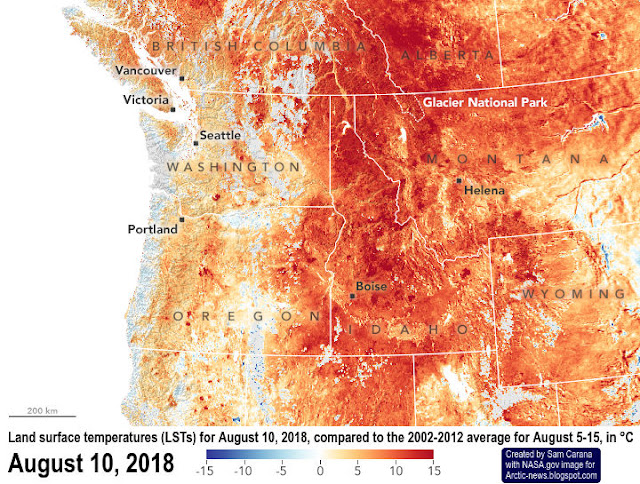 When calculating how much warmer it is now, a number of things must be taken into account:
Depending on how the above three points are dealt with, the temperature in August 2018 may well be more than 3°C above the mean annual global temperature in 1750. The question is whether August 2018 will be warmer than August 2016, which was 2.3°C warmer than 1980-2015.

Remember the Paris Agreement, when politicians pledged to take efforts to ensure that the temperature would not cross 1.5°C above preindustrial? Why did the Paris Agreement not specify a year for preindustrial? Perhaps the idea was that total anthropogenic global warming should not exceed 1.5°C. In other words, the warming that people had already caused by 1750, plus the warming people caused since 1750, plus the warming that is already baked in for the decades to come. The image below illustrates this idea and also shows that we're well above 1.5°C anthropogenic global warming. 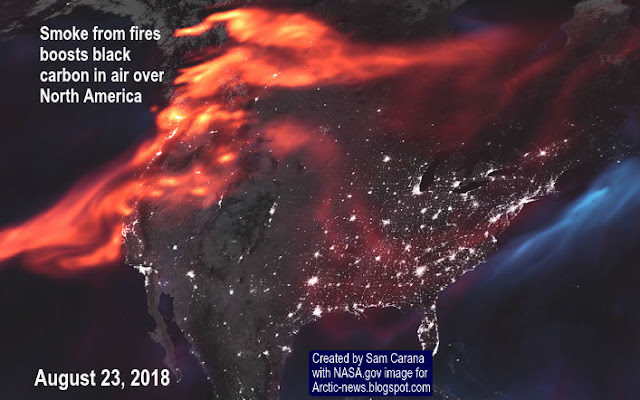 The impact of aerosols such as sulfur dioxide and dust is often overlooked. The image below shows that τ, i.e. light at 550 nm as a measurement of aerosol optical thickness due to dust aerosols, was as high as 4.0641 on June 16, 2018. 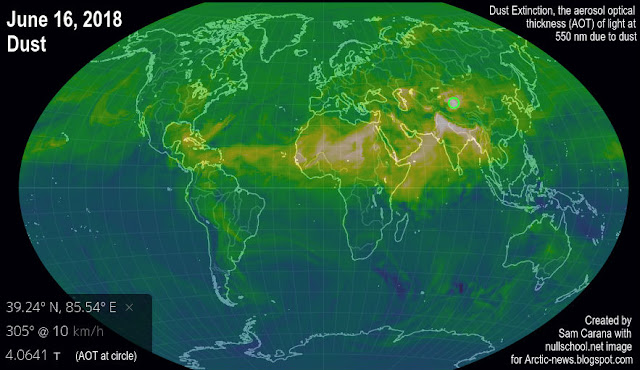 Dust is one reason why temperatures didn't cross the 1°C above preindustrial mark during the peak of the recent Milankovitch cycle. A recent study calculates that the global annual mean surface temperature increases by 0.3°C for the mid-Holocene (6 ka), if the dust is completely removed.

Most dust appears to originate from the Sahara Desert, which lost its vegetation during the Holocene due to goats, according to this study, as people removed predators such as lions and tigers. As the Sahara lost its vegetation, the surface became more reflective, while dust further made that temperatures didn't rise as much as they otherwise would have.

Deforestation has caused a lot of carbon dioxide to be added during preindustrial times, and there is also the impact of black carbon aerosols, resulting from biomass and fossil fuel burning, which causes some 1.1W/m² warming today and some 0.2W/m² is coming from preindustrial activities.

In conclusion, temperatures would be a lot lower in the absence of human activities, while total anthropogenic global warming over the past few thousand years is much larger than most people think.

• NASA - The Northwest is Running Hot and Dry
https://earthobservatory.nasa.gov/images/92601/the-northwest-is-running-hot-and-dry 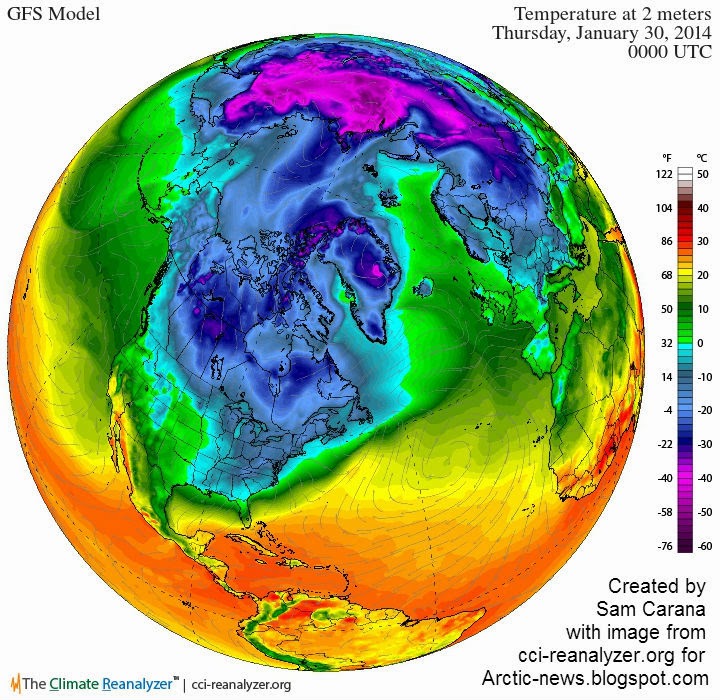 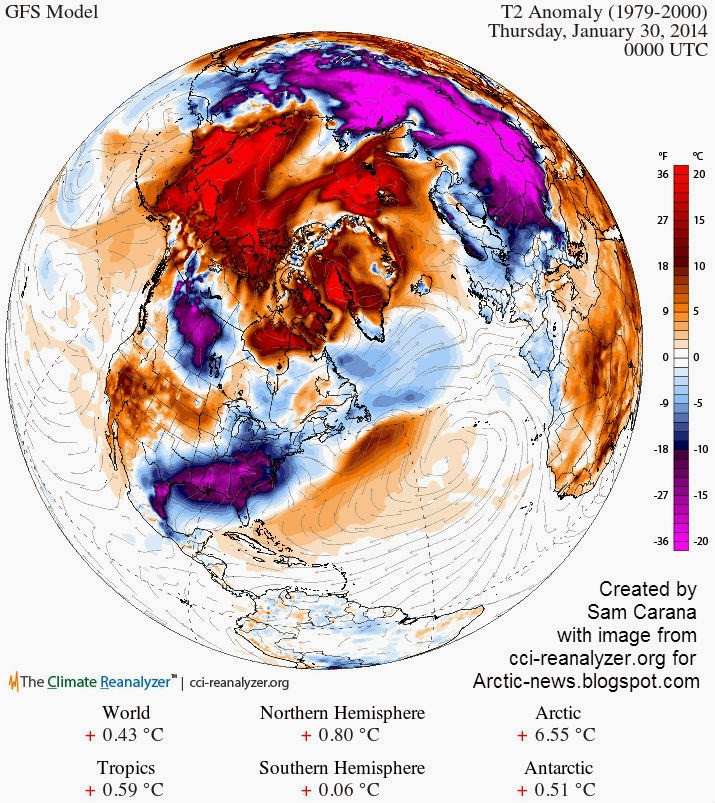 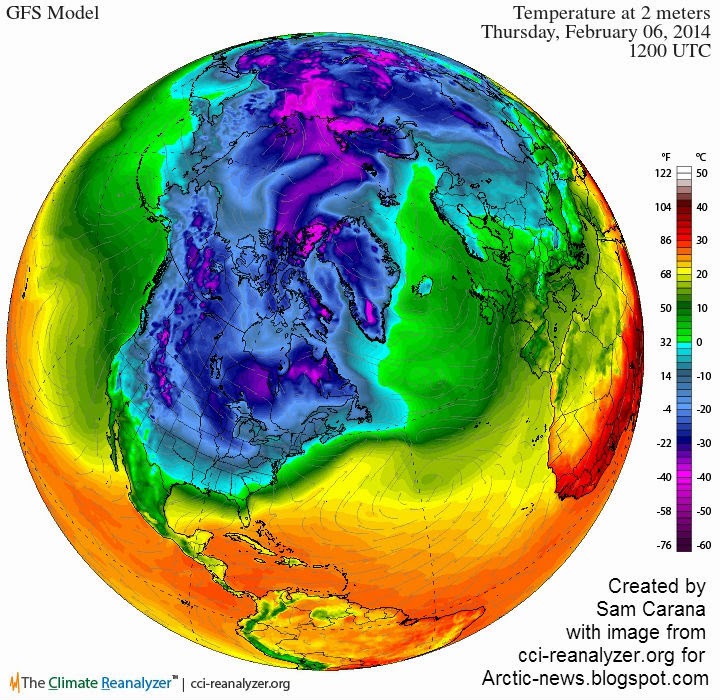 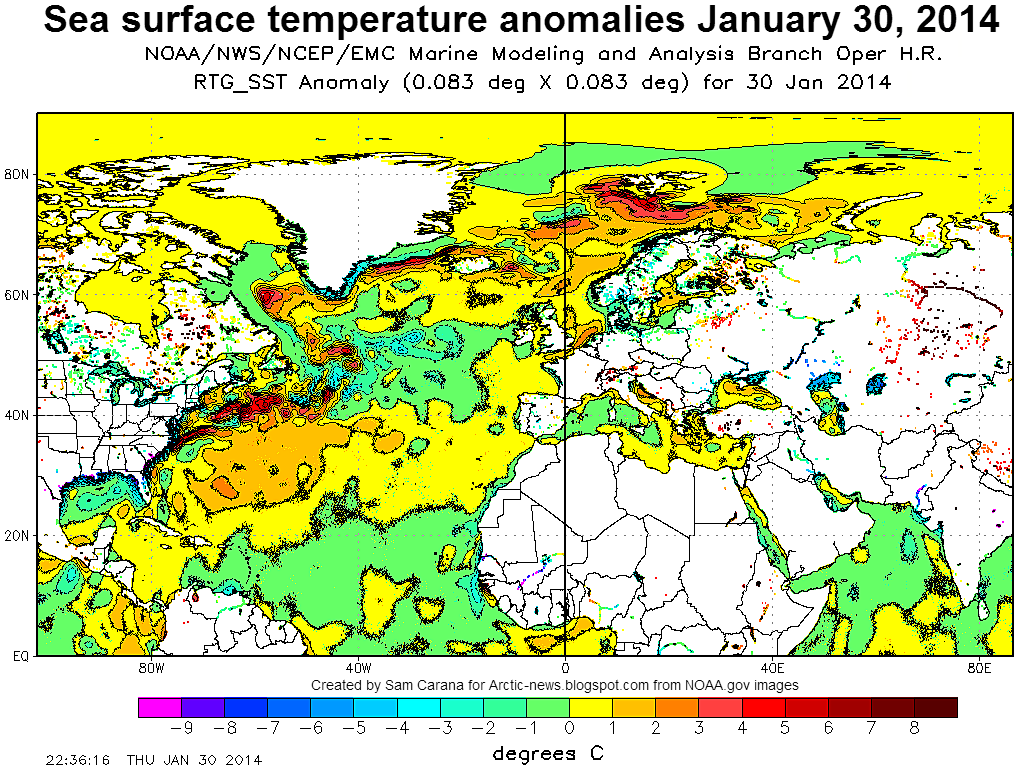 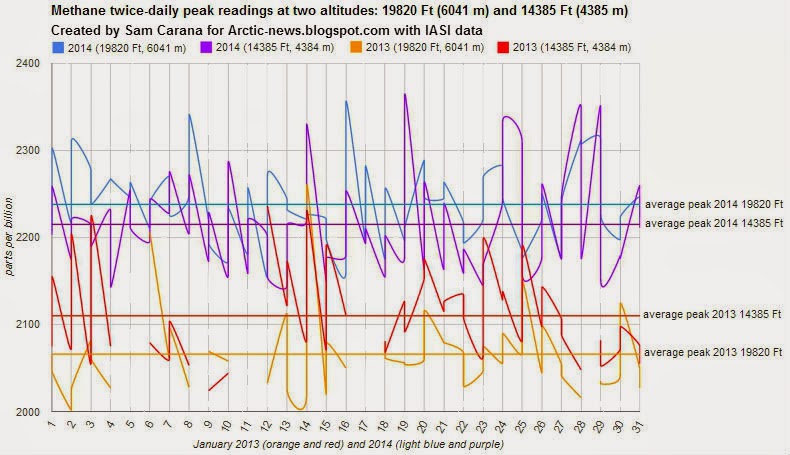 Amplification of climate change in the Arctic

In contrast to multi-year old ice, first-year old ice—ice that formed only since the last melt season—is thinner, saltier, and much more prone to melt. 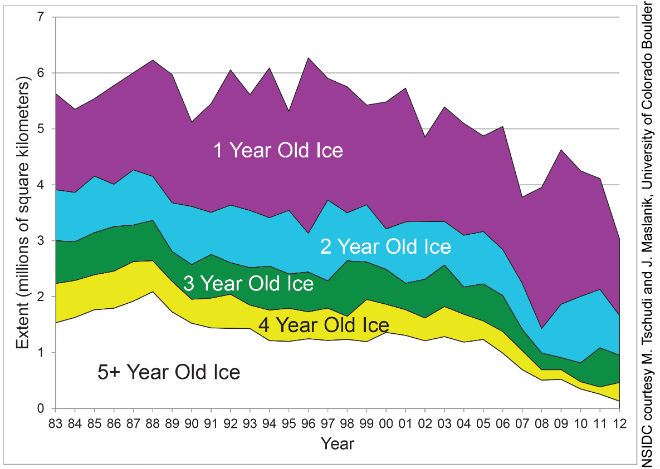 Over the years, the loss of sea ice has become especially manifest in the older ice, as illustrated by the image below. 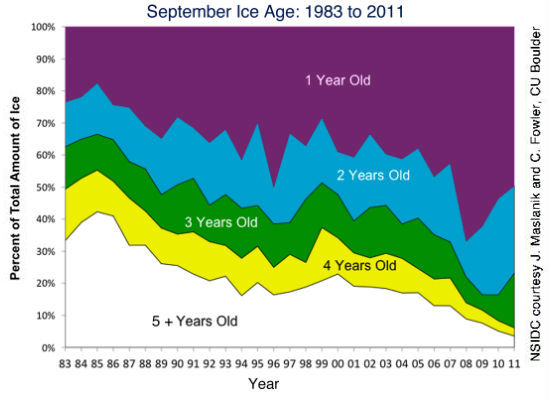 Salt content and hardness play a part in multi-year ice’s resistance to melt, explains a recent NOAA article, but the main characteristic that allows the ice to survive the melt season is thickness.

The decline in thickness over the years goes a long way to explain the self-reinforcing character of sea ice decline in the Arctic.

As another recent NOAA article describes, there is “something extra” behind the record ice retreats of the past 6 years: each June, the prevailing winds shifted from their normal west-to-east direction and instead blew strongly from the south across the Bering and Chuchki Seas (left on the image below), over the North Pole, and out toward Fram Strait. (The length of the lines is qualitative: longer lines mean stronger winds.)


The image below shows the unusual air pressure patterns that gave rise to the wind shift. Air pressure across the Arctic in Junes from 2007-2012 was completely lopsided, with two pockets of higher-than-average pressure sprawled across the North American Arctic and Greenland. These areas of high pressure act like boulders in a river. They slow and disrupt the normal westerly flow of the wind, forcing it to make, large, meandering detours to the north or south.

Arctic oceanographer and his NOAA colleagues think these “blocking highs” on the North American side of the Arctic created the unusually strong southerly flow that brought warm air into the central Arctic and over Greenland. The persistent southerly winds would help explain both the record low sea ice extent in summer 2012, as well as the island-wide melting of the surface of the Greenland Ice Sheet, which satellites detected in July 2012.

“This story started with us trying to figure out why the sea ice extents of the past 6 years or so have been so much lower than we would expect based on the long-term warming trend alone,” says Overland, “and we think this unusual circulation of the Arctic atmosphere is major part of it.”

Why, asks Overland, have these high pressure patterns have been forming so consistently each June for the past six years? The repeated appearance of these atmospheric features each June is so unusual that it’s the equivalent of a 1-in-a-1000 event. Can this be attributed to natural variability?

Instead, Overland’s hunch is that the cause is a change in the atmosphere that is itself connected to climate change in some way, possibly linked to record and near-record low June snow cover in the Canadian Arctic in recent years. “We don’t know that part of the story yet,” he says, “but this would certainly be the type of amplification of climate change [warming triggers changes that lead to more warming] we have been expecting to see in the Arctic.”


- Accelerated Warming in the Arctic
http://arctic-news.blogspot.com/2012/09/accelerated-warming-in-the-arctic.html

- Opening the Doorways to Doom
http://arctic-news.blogspot.com/2012/08/opening-the-doorways-to-doom.html

- How extreme will it get?
http://arctic-news.blogspot.com/2012/07/how-extreme-will-it-get.html