The NASA image below gives an impression of the strengtrh of hurricane Sandy, as it approached the U.S. coast on October 28, 2012.

The animation below was created by Alex Hutko, a seismologist at the Incorporated Research Institutions for Seismology (IRIS) in Seattle. It shows how seismic stations lit up as hurricane Sandy continued its path.


The images below are screenshots from the animation, showing how three eathquakes hit the coast off British Columbia in Canada, coinciding with large tremors caused by Sandy. A 7.7 magnitude earthquake (image below) hit the coast off Vancouver on October 28, 2012, at around 2:00 EDT. The USGS later upgraded the earthuake to magnitude 7.8 and gave the time as 3:04 UTC. 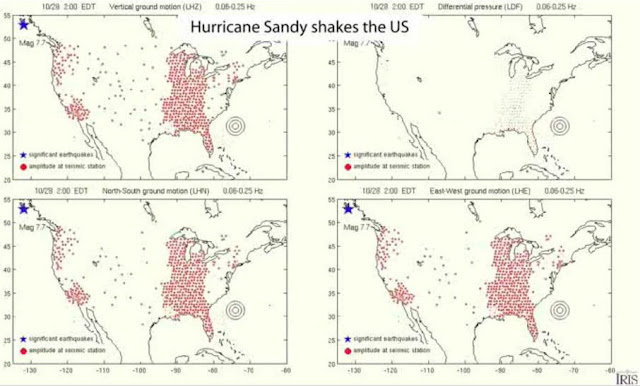 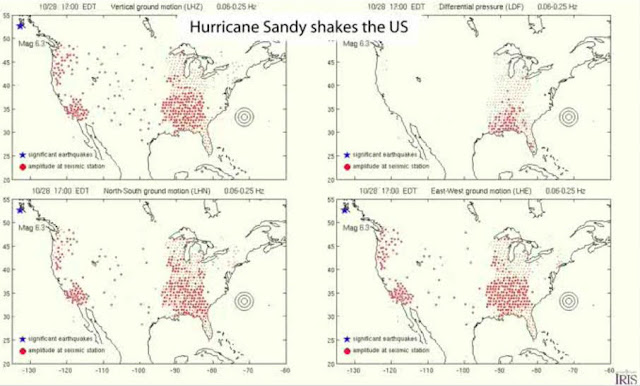 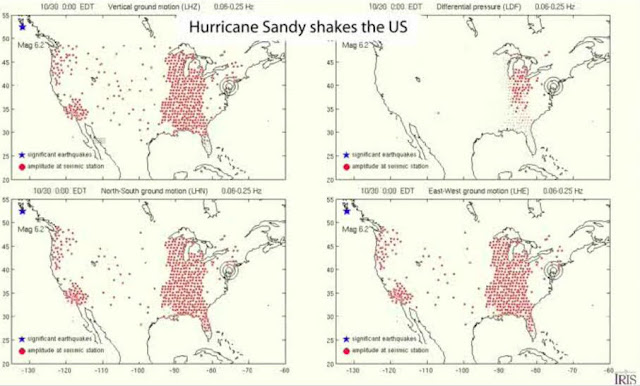 The USGS image below gives further time and location details of these earthquakes using UTC time. 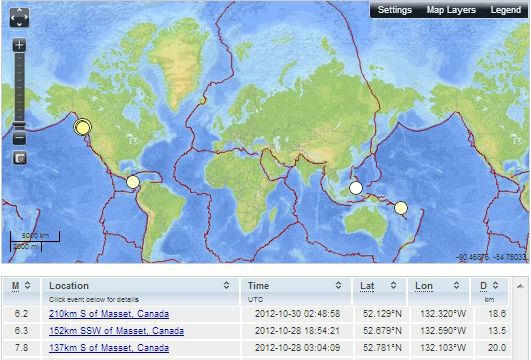 There were more earthquakes than that. At the USGS site, I counted 90 further earthquakes in the area with a magnitude of at least 4 that occurred within days of the first earthquake.
Paul Beckwith, regular contributor to this blog, gives the following comments on the question whether Sandy was the trigger for major earthquakes off Vancouver.

“Sandy was a massive storm, packing an enormous amount of energy. According to Jeff Master's Wunderground blog, she carried the energy equivalent of five Hiroshima sized nuclear bombs.
As she approached the eastern seaboard of the United States she was detected on the seismic stations in the U.S. As she moved her large size (tropical storm winds within a 900 mile diameter) and extremely low pressure center (940 mb usually indicative of Category 3 or even 4 magnitude hurricanes), she sucked enormous quantities of ocean water upward.
Clearly, this adds tremendous stresses onto the earths crust and pushes it downward; this was reflected in the seismic stations. The animation of her progress shows the ground stresses across North America between October 14th and November 1st. On her northward jaunt up the eastern coast the seismic strain lit up to a peak and there was a 7.8 magnitude earthquake (Oct 28th, 3:04 UTC) off Vancouver, as shown in the first image.
As she continued northward and just before her extremely unusual left turn (due to extreme waviness of Rossby wave jet streams leading to continental low and northward tilted blocking high), there was another maximum of red seismic activity and a 6.3 magnitude aftershock (October 28, 18:54 UTC).
Then she turned left and as she crossed the coastline just south of NYC there was a second large aftershock of 6.2 magnitude (October 30, 2:38 UTC). Again, this aftershock coincided with large seismic activity indicated in red on the east coast.
Coincidence? I think not. Stress on one side of a continental plate (North American plate in this case) can deflect the plate downward locally and cause it to bow up or down afar, i.e. on the other side of the plate of the west coast). The precise coincidence of the timing for the main quake and the 2 aftershocks with peaks of seismic activity on the eastern coast seems to match too closely to be a mere coincidence, but more study is required.”


In conclusion, there is a danger that storms and cyclones trigger submarine earthquakes, which can in turn cause shockwaves and landslides over a wide area, destabilizing hydrates and triggering massive releases of methane in the process. As the sea ice disappears, the Arctic Ocean increasingly features open waters which are more prone to cyclones.

Two earthquakes off the coast of Jan Mayen Island

The location of the earthquakes is indicated by the blue square on the top left of the USGS map below. 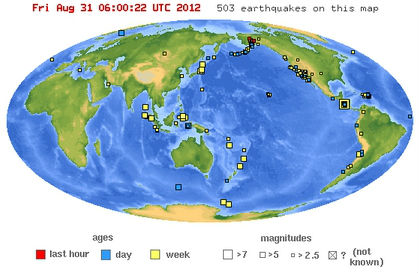 The Google map below shows that the location is on fault line extending north into the Arctic Ocean. 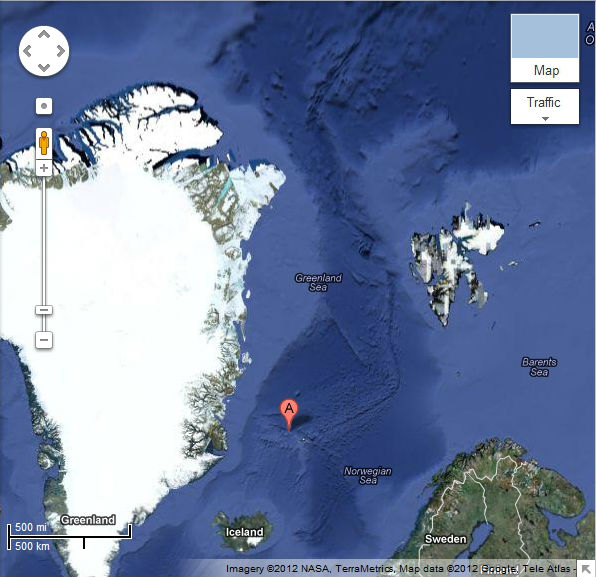 The map below shows the two earthquakes at the top in orange. The map shows all earthquakes with a magnitude 5.0 or higher that happened worldwide from August 1 to 30, 2012. 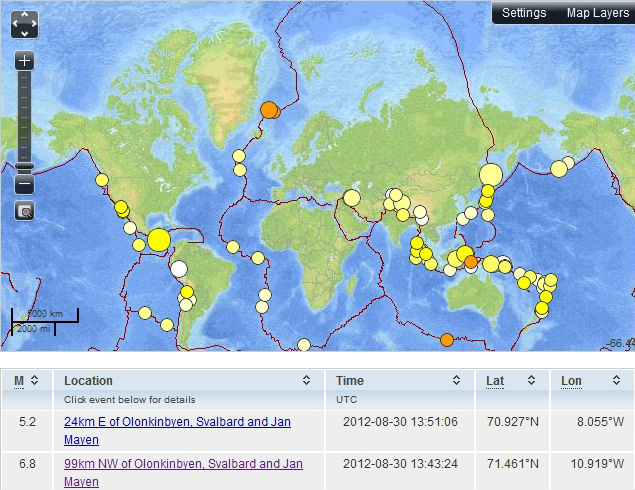 The largest earthquake in August 2012 was a magnitude 7.7 quake on August 14 in the Sea of Okhotsk, close to Sakhalin, Russia's largest island.  With a depth of 626 km (389 miles), it was a "deep-focus" earthquake. Such quakes can be felt at great distance from their epicenters.

As the above map shows, this 7.7 M earthquake and the two recent ones off the coast of Jan Mayen Island occurred on the same fault line that goes over the Arctic. The danger is that further earthquakes on this fault line could destabilize methane hydrates in the Arctic, triggering release of huge amounts of methane.

The map below, from this page, shows fault lines and elevation in meters.

In 2011, a number of posts were added on this topic at knol, which has meanwhile discontinued. These posts have been preserved at the following pages:
Methane linked to Seismic Activity in the Arctic
Runaway warming
Thermal expansion of the Earth's crust necessitates geoengineering

High level of seismic activity in 2012

Seismologists say last week's powerful earthquake off western Indonesia increased pressure on the source of the devastating 2004 tsunami: a fault that could unleash another monster wave sometime in the next few decades, reports the San Francisco Chronicle.  “The spring was pushed a little bit tighter,” said Kerry Sieh, director of the Earth Observatory of Singapore.

“Something is wrong! There are too many strong earthquakes,” believes Romania’s top seismologist, Gheorghe Marmureanu, who finds the latest Indonesian quake very unusual. According to Marmureanu, what happened in Indonesia came as a surprise that puzzled scientists. “Statistics show that, in this region of Asia, there is one big earthquake every 500 years, roughly. However, since 2004, there already were three quakes with magnitudes above 8, which is out of seismological statistics. Something is wrong! There are too many big quakes in the Indonesian area,” Marmureanu warns.

The Extinction Protocol reports Marmureanu quoting from his book, page 495, according to the Extinction Protocol: “If you keep seismically shaking the Earth, like a bottle of soda, its structural integrity eventually will become compromised and it will start to fracture like an egg. In this case, the fracturing will be thermal dissipation by hyper-volcanism, mega-thrust earthquakes, and greater tectonic boundary plate agitation around volcanic arcs and subduction zones…if this is what’s indeed happening, the pressure will continue to build in the interior of the planet until it eventually destabilizes all tectonic plates in a spectral pattern of continous seismic oscillation. Every earthquake generates and emits enough kinetic energy through the earth to potentially trigger more seismic disturbances.” 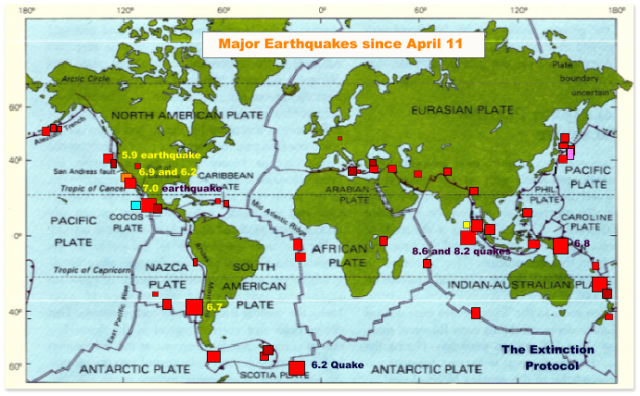 The post at the Extinction Protocol is accompanied by above map, with the caption that the shocking number of earthquakes that have rattled the globe, especially along tectonic plate boundaries, since the double 8.0+ magnitude earthquakes struck off the coast of Northern Sumatra on April 11 could be early indication the planet may be shifting towards a new catastrophic model.

Apart from earthquakes, there has also been plenty of volcanic activity this year. On 13 April, an explosion from Sangay volcano was observed at 08:25 local time, generating an ash and steam column of 2 km above the summit crater. This was the 49th volcano to erupt in 2012, reports the Extinction Protocol in another post, adding that there were about 50 volcanoes eruptions in all of 2011, while from 1990 to 2008 the average number of volcanoes erupting annually was 66.

The chart below, from dlinquist.com, shows a smoothed graph with total strength of earthquakes registering as 6+ on the Richter scale from 1973. 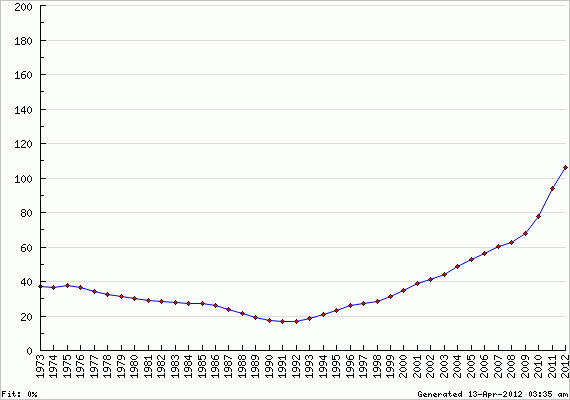 Finally, the map below, also from dlinquist.com, shows where earthquakes have occurred from 1973. 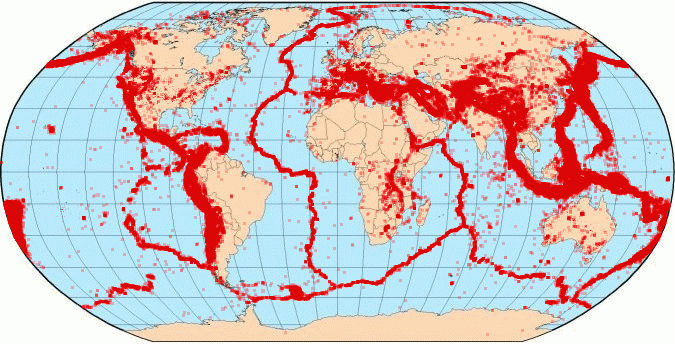 Importantly, earthquakes can disturb methane hydrates, resulting in abrupt releases of methane; as the post Thermal expansion of the Earth's crust necessitates geoengineering discusses, to firmly reduce this risk would necessitate geo-engineering.
Posted by Sam Carana at 7:11 AM No comments: