Can we expect more earthquakes to hit the U.S.? If so, why?

First of all, as said, many earthquakes do appear to hit the U.S. when looking at above image, but the above USGS map doesn't show smaller earthquakes (under magnitude 4) outside the U.S.

Nonetheless, there can be other reasons why so many earthquakes have recently hit the U.S., so let's explore some of them further.

It's a well-known phenemenon that, during the northern summer, more earthquakes do hit the Northern Hemisphere, rather than the Southern hemisphere. That's a natural phenomenon, but there can also be ways in which people can contribute to the incidence of earthquakes.

Isostatic rebound and changing stress conditions due to meltwater run-off can trigger seismic events. For months now, a huge amount of seismic activity has hit faultlines along the boundaries of the North American Plate, as earlier discussed in the earlier post Ring of Ice.


Bill McGuire, Emeritus Professor of Earth Sciences at the University College London, recently said the following in post at ClimateState.com:
“There may be a threat of submarine landslides around the margins of Greenland, which are less well explored. Greenland is already uplifting, reducing the pressure on the crust beneath and also on submarine methane hydrates in the sediment around its margins, and increased seismic activity may be apparent within decades as active faults beneath the ice sheet are unloaded. This could provide the potential for the earthquake or methane hydrate destabilisation of submarine sediment, leading to the formation of submarine slides and, perhaps, tsunamis in the North Atlantic.

We see evidence of the Earth ‘waking up’ specifically in relation to seismic activity in areas of Alaska where dramatic ice loss (up to 1km vertical thickness) has occurred over the last 100 years, and also in relation to the correlation in many high mountains terrains of increased landslide occurrence and heatwaves.

There is no unequivocal evidence for a specific volcanic response, unless the high level of recent activity at the Icelandic volcanoes is a reflection of unloading due to melting of the Vatnajokull Ice Cap. Certainly this whole region is uplifting by a few centimetres a year, so such a suggestion would not be completely unreasonable, even if we don’t (yet?) have any hard evidence.”

Particularly dangerous in this respect are earthquakes along the fault that crosses the Arctic Ocean, such as the 4.5 M earthquake indicated by the blue dot on the top map, also indicated on the map below. The danger here is that such earthquakes could destabilize methane hydrates that are highly prominent in sediments under the Arctic Ocean.

As discussed in earlier posts, wild weather swings could also contribute to destabilization of methane hydrates. Furthermore, a study published this year suggests that human-caused groundwater depletion contributed to the prominence of earthquakes in California. Similar suggestions were made in a study focusing on a 2011 earthquake in Spain.


Besides the above wild weather swings, wild weather itself could similarly be destructive. As hurricane Sandy approached the U.S. coast in 2012, the force of waves slamming into other waves shook the seafloor, which was recorded by earthquake sensors. The energy generated by Sandy was similar to small earthquakes between magnitudes 2 and 3, seismologists at the University of Utah estimated.
Did typhoon VongFong cause earthquakes around Japan? The image on the right shows earthquakes that occured around Japan during the seven days up to October 16, 2014. Again, the map doesn't show the smaller quakes, so further studies may be needed to shed more light on this.
As above image shows, some 1500 earthquakes hit the world over a period of seven days up to October 17, 2014, 03:59:21, UTC. Of all these earthquakes, some 1300 hit the U.S. alone. This points at a further cause, i.e. fracking. A recent study has confirmed that fracking is linked to more earthquakes than previously believed.

“By once again failing to announce strong, decisive action to combat methane at the recent Climate Summit at the United Nations, Obama missed a major opportunity to demonstrate global leadership on climate change. Global emissions of methane equal or exceed the global emissions of carbon dioxide, when the methane emissions are converted to their equivalency for causing global warming using an integrated 10-year time period.”
Meanwhile, the EPA is still underreporting methane's Global Warming Potential, as earlier discussed at Myth #7 and despite a call by Rob Howarth and other methane experts to accurately account for warming effects of methane. 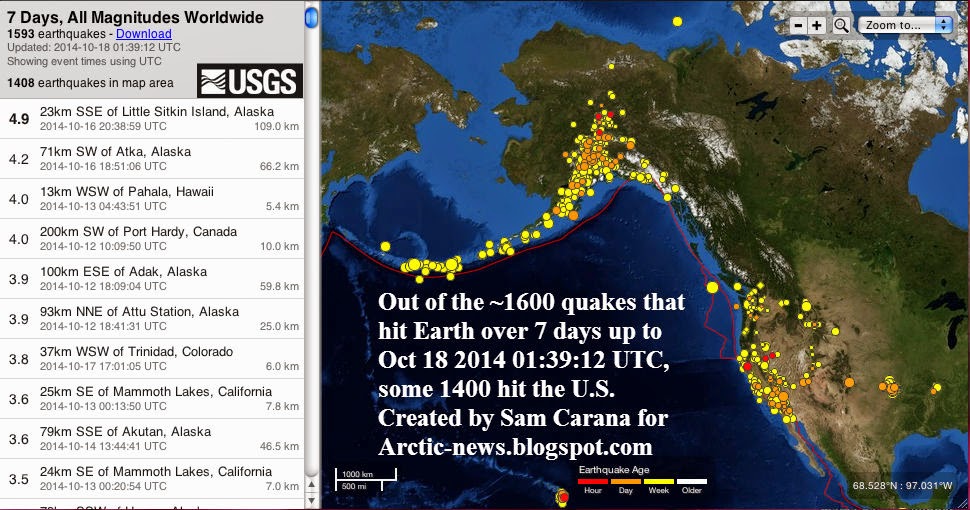 - A global surge of great earthquakes from 2004-2014 amd implications for Cascadia - by Thorne Lay
https://gsa.confex.com/gsa/2014AM/webprogram/Paper242140.html

- Methane hydrate destabilisation is clearly a real worry, particularly in the context of warming ocean waters in the East Siberian Continental Shelf
http://climatestate.com/2014/10/16/methane-hydrate-destabilisation-is-clearly-a-real-worry-particularly-in-the-context-of-warming-ocean-waters-in-the-east-siberian-continental-shelf