Could Earth go the same way as Venus?

A 2°C, 3°C, 4°C or 5°C RISE?
The rise that has already unfolded, i.e. the rise from pre-industrial to 2020, could be as much as 2.3°C, as discussed above and at the pre-industrial page. Furthermore, the temperature rise is accelerating. In other words, Earth is already in the danger zone and the question remains what the implications are of a 3°C, 4°C and 5°C rise.
What would be the impact of a 3°C, a 4°C, or a 5°C rise?

At a 3°C rise, humans will likely go extinct, as habitat for humans (and many other species) will disappear. Such a rise will cause a rapid decline of the snow and ice cover around the globe, in turn making that less sunlight gets reflected back into space. Associated changes are discussed in more detail at this page and this page, and include that the jet stream will further get out of shape, resulting in more extreme weather events such as droughts, heatwaves and firestorms. Changes to the jet stream will also contribute to a further strengthening of storms, which threatens to at times push large amounts of hot, salty water into the Arctic Ocean, triggering eruptions of more and more seafloor methane, as discussed in an earlier post.
From a 4°C rise, Earth will experience a moist-greenhouse scenario. As the temperature rise gains further momentum, runaway heating may well turn Earth into a lifeless planet, a danger that was discussed in this 2013 post, warning that, without anything stopping the rise, it will continue to eventually destroy the ozone layer and the ice caps, while the oceans would be evaporating into the atmosphere's upper stratosphere and eventually disappear into space.

At 5°C rise, most life on Earth will have gone extinct. A 2018 study by Strona & Bradshaw indicates that most life on Earth will disappear with a 5°C rise (see box on the right). As the temperature keeps rising, chances are that all life on Earth will go extinct, as Earth would be left with no ozone layer to protect life from deadly UV-radiation. Furthermore, Earth would no longer have water, an essential building block of life. Soil moisture, groundwater and water in oceans would evaporate and eventually disappear into space, as discussed in an earlier post.

Much of the above was discussed earlier at Most Important Message Ever. and at facebook.

Beyond a 5°C rise

The image be;low, by Song et al. (2021), shows how major mass extinctions over the past 541 million years (the Phanerozoic) are linked to temperature rises higher than 5.2°C and rates of change higher than 10°C/Myr. 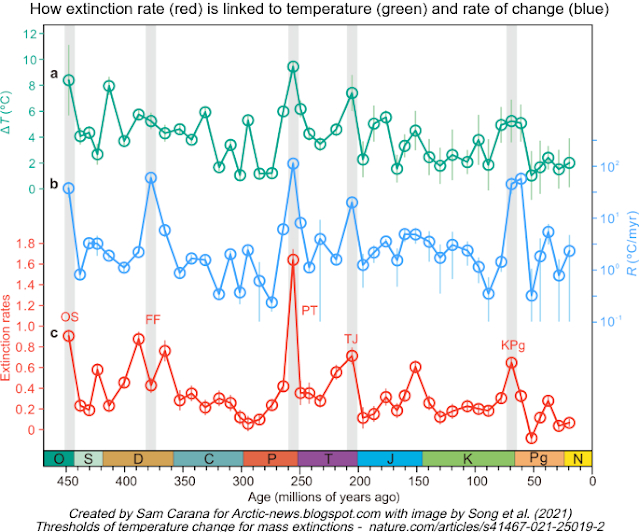 The image below, from an earlier post, sums up our predicament, highlighting the rapidity of the current temperature rise. 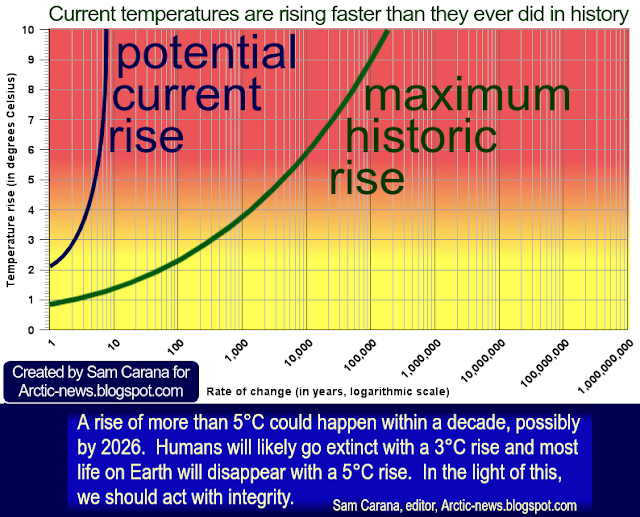 Could Earth go the same way as Venus?
Earth did experience high temperatures before, but it cooled down and some species did survive the mass extinctions in the past. This time, however, temperatures could keep rising, due to:
The question is, will Earth go the same way as Venus? Consider that there could be a rise from pre-industrial of as much as 18.44°C by end 2026, as discussed in an earlier post and at the extinction page. Also consider the following, from a 2013 post,
Earth is on the edge of runaway warming

How well is Earth's orbit around the sun positioned within the boundaries of the habitable zone? The illustration by the Wikipedia image on the right would give that impression that Earth was comfortably positioned in the middle of this zone.

What is the habitable zone? To be habitable, a planet the size of Earth should be within certain distances from its Sun, in order for liquid water to exist on its surface, for which temperatures must be between freezing point (0° C) and boiling point (100° C) of water.

In the Wikipedia image, the dark green zone indicates that a planet the size of Earth could possess liquid water, which is essential since carbon compounds dissolved in water form the basis of all earthly life, so watery planets are good candidates to support similar carbon-based biochemistries.

If a planet is too far away from the star that heats it, water will freeze. The habitable zone can be extended (light green color) for larger terrestrial planets that could hold on to thicker atmospheres which could theoretically provide sufficient warming and pressure to maintain water at a greater distance from the parent star.

A planet closer to its star than the inner edge of the habitable zone will be too hot. Any water present will boil away or be lost into space entirely. Rising temperatures caused by greenhouse gases could lead to a moist greenhouse with similar results.

The distance between Earth and the Sun is one astronomical unit (1 AU). Mars is often said to have an average distance from the Sun of 1.52 AU. A recent study led by Ravi Kopparapu at Penn State mentions that early Mars was warm enough for liquid water to flow on its surface. However, the present-day solar flux at Mars distance is 0.43 times that of Earth. Therefore, the solar flux received by Mars at 3.8 Gyr was 0.75 × 0.43 = 0.32 times that of Earth. The corresponding outer habitable zone limit today, then, would be about 1.77 AU, i.e. just a bit too far away from the Sun to sustain water in liquid form. Venus, on the other hand, is too close to the Sun (see box below).

Kopparapu says that if current IPCC temperature projections of a 4 degrees K (or Celsius) increase by the end of this century are correct, our descendants could start seeing the signatures of a moist greenhouse by 2100.

Kopparapu argues that once the atmosphere makes the transition to a moist greenhouse, the only option would be global geoengineering to reverse the process. In such a moist-greenhouse scenario, not only are the ozone layer and ice caps destroyed, but the oceans would begin evaporating into the atmosphere's upper stratosphere.

The video below, Science Snippets: Loss of All Life on Earth Explained ... Again - by Guy McPherson, describes our precarious situation.
Links

• What the IPCC impacts report is hiding
https://arctic-news.blogspot.com/2022/02/what-the-ipcc-impacts-report-is-hiding.html

• When will humans go extinct?
https://arctic-news.blogspot.com/2022/02/when-will-humans-go-extinct.html

• Earth is closer to the edge of Sun's habitable zone (2013)
http://physicsworld.com/cws/article/news/2013/mar/25/earth-is-closer-to-the-edge-of-suns-habitable-zone

• Tardigrades have a fatal weakness after all (2020)
https://bigthink.com/hard-science/tardigrades-extremophiles
• Thermotolerance experiments on active and desiccated states of Ramazzottius varieornatus emphasize that tardigrades are sensitive to high temperatures - by Ricardo Neves et al. (2020)
https://www.nature.com/articles/s41598-019-56965-z