Accelerating growth of carbon dioxide in the atmosphere

People may not have thought that growth in carbon dioxide (CO₂) levels in the atmosphere would accelerate, when pledges were made in 2015 at the Paris Agreement to take efforts to keep the temperature rise under 1.5°C compared to preindustrial. 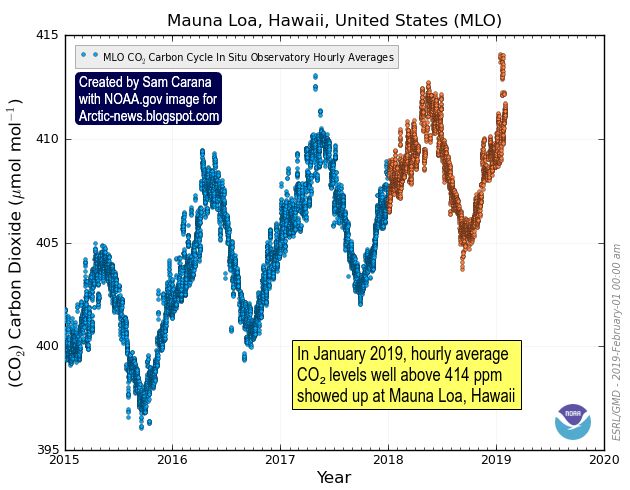 Yet, on January 21, 2019, hourly average CO₂ levels well above 414 ppm were recorded at Mauna Loa, Hawaii, the highest levels since such measurements started. A daily average level of 413.86 ppm was recorded on January 22, 2019. 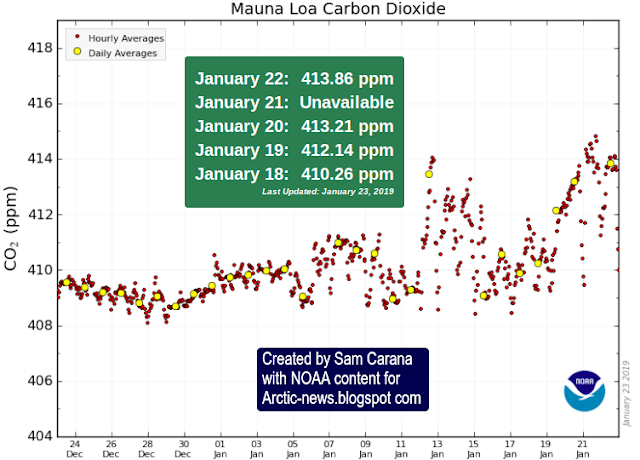 A recent Met Office forecast expects monthly averages to reach a level of 414.7 ppm in May 2019. The forecast expects annual average CO₂ levels at Mauna Loa to be 2.75 ppm higher in 2019 than in 2018. That figure is virtually on the trendline depicted below. 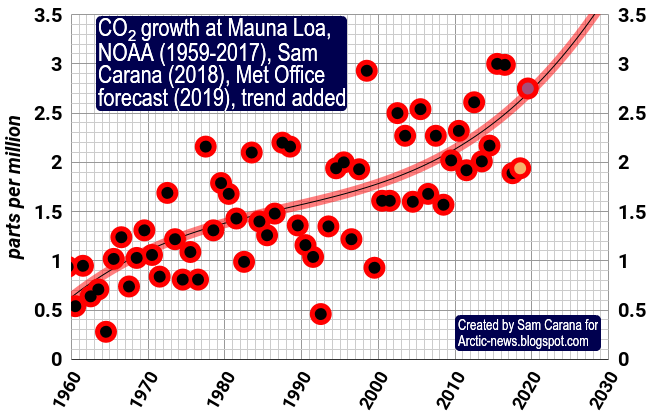 The trend in above image is calculated with NOAA 1959-2017 growth data, with an estimate for 2018 calculated by Sam Carana with NOAA January 2017-November 2018 data (orange dot), and with this Met Office forecast used for 2019 (purple dot).

Strong CO₂ growth is forecast for 2019, due to a number of factors including rising emissions, the added impact of El Niño and less uptake of carbon dioxide by ecosystems. A recent study warns that global warming will enhance both the amplitude and the frequency of eastern Pacific El Niño events and associated extreme weather events. Another recent study warns that, while the terrestrial biosphere now absorbs some 25% of CO₂ emissions by people, the rate of land carbon uptake is likely to fall with reduced soil moisture levels in a warmer world. Furthermore, forest fires will increase as temperatures rise, as soils get more dry and as winds increase in strength, resulting in further increases of CO₂ emissions. 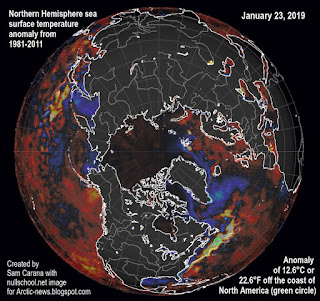 La Niña has kept much heat in oceans in 2018. Not surprisingly, 2018 was the hottest year for our oceans since global records began in 1958.

As an indication how much heat is contained in the North Atlantic, very high sea surface temperatures did show up recently off the coast of North America, with anomalies on January 23, 2019, as high as 12.6°C or 22.6°F (compared to 1981-2011, green circle on the image on the right). 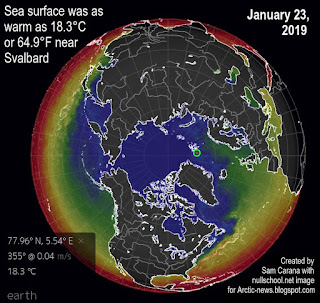 That day, sea surface temperatures near Svalbard were as high as 18.3°C or 64.9° (green circle, image right). The Gulf Stream carries ocean heat to the Arctic Ocean and it can take a couple of months for this heat to reach the Arctic Ocean and contribute to melting of the sea ice.

So, Arctic sea ice is expected to be invaded by ocean heat from below in 2019, while El Niño will cause high temperatures over the Arctic, melting the sea ice from above.

Furthermore, rivers that end in North America and Siberia can be expected to carry much warm water into the Arctic Ocean. 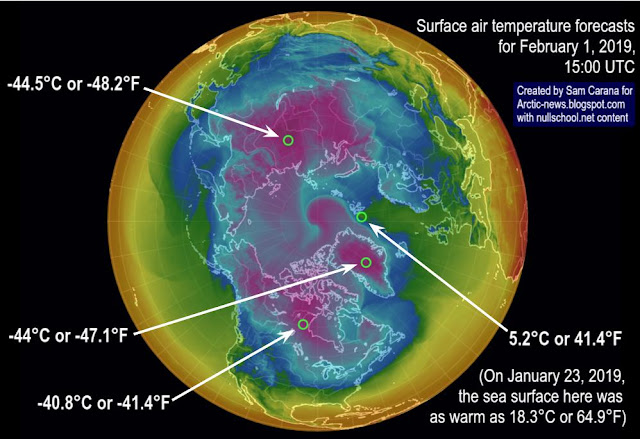 These low temperatures are the result of global warming. As the Arctic warms up faster than the rest of the world, the temperature difference between the North Pole and the Equator narrows, making the jet stream wavier, thus enabling cold air from the Arctic to descend further south.

As the jet stream gets wavier, more warm air can also enter the Arctic from the south. Above image also shows that surface air temperatures near Svalbard are forecast as high as 5.2°C or 41.4°F, illustrating how warm the air can be close to the North Pole, at a time of year when virtually no sunlight reaches that area. 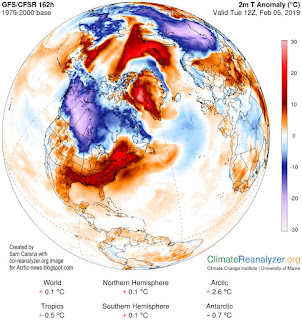 Furthermore, as oceans get warmer, the temperature difference between land and oceans increases in Winter. This larger temperature difference results in stronger winds that can carry more warm and moist air inland, e.g. into the U.S., as illustrated by the cartoon. Stronger winds can also carry more warm and moist air into the Arctic and can speed up the flow of sea currents, causing warm and salty water to reach the sea ice and speed up its decline.

The sea surface is warming up strongly in this area near Svalbard, as the water underneath the surface of the North Atlantic can be much warmer than the water at the surface, and warm water is coming to the surface in line with a rise in the seafloor in this area, as discussed in earlier posts such as this one and this one.

The joint impact of all this is terrifying. Ocean heat that reaches sediments at the seafloor of the Arctic Ocean can destabilize hydrates, resulting in eruptions of huge amounts of methane. This alone can cause a global temperature rise of 1.1°C in a matter of years.

The image on the right shows the joint impact of the warming elements that threaten to eventuate over the next few years and that could result in a rapid 10°C or 18°F global temperature rise by 2026 or even earlier. Keep in mind that global biodiversity will have collapsed once temperatures have risen by 5°C.