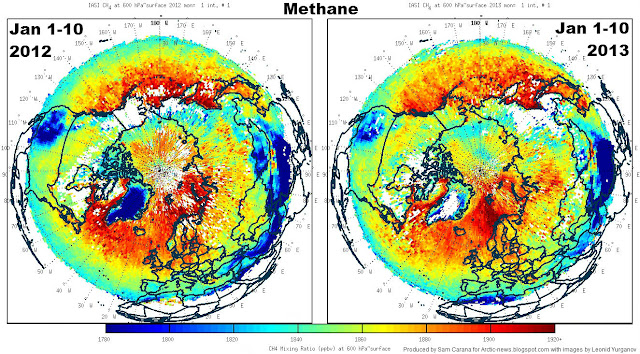 The 2013 image shows worryingly high levels of methane between Norway and Svalbard, an area where hydrate destabilization is known to have occurred over the past few years. Even more worrying is the combination of images below. Methane levels came down January 11-20, 2012, but for the same period in 2013, they have risen. 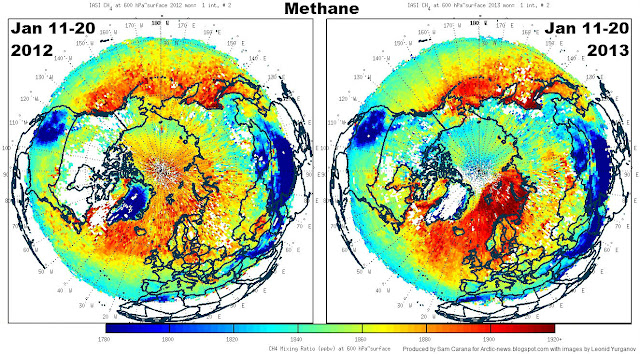 On January 21, 2013, as shown on the image below, methane levels of up to 2234 ppb were recorded at 892 mb. Further examination indicated that this was caused by large releases of methane above North-Africa, apparently associated with the terrorist attack on the natural gas plant in Algeria.  An image without data is added underneath, to better distinguish locations on the map.

Below a NOAA image with temperature anomalies for January 7, 2013, when a huge area of the Arctic experienced anomalies of over 20 degrees Celsius, including a large area close to Svalbard.

Temperatures change daily, as the wind changes direction and as sea currents keep the water moving around the Arctic Ocean. For an area close to Svalbard, the recent 30-day temperature anomalies is over 20 degrees Celsius, as shown on the NOAA image below, and this indicates persistently high temperature anomalies for that area.

Below, a NOAA image showing sea surface temperature anomalies up to 5 degrees Celsius close to Svalbard.