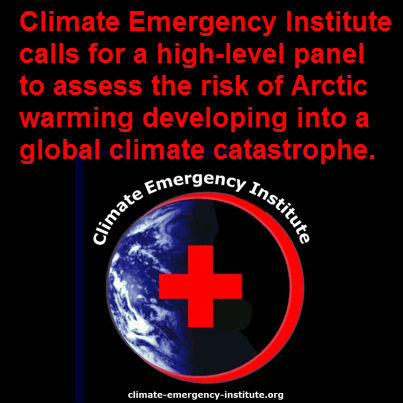 There is a rapid and accelerating decline of Arctic and Far North snow and summer albedo cooling, with the Arctic summer sea ice past tipping point. Several potentially catastrophic (to huge human populations and all future generations) Arctic changes are happening decades ahead of model projections. This is potentially a United States and world food security emergency, and an Arctic methane feedback planetary emergency. The pace is outstripping the capacity of the international published climate modeling science to assess the risks. The climate science assessment process is unable to rapidly assess all the risks and the combined risk of all risk factors.

In 2008 and again in 2012, after the large drops in summer sea ice extent, James Hansen made a public statement that the world is a state of planetary emergency. Starting in 2006 John Holdren presented the scientific evidence that we are beyond dangerous interference with the climate system and challenged to prevent catastrophic interference.

All Arctic sources of global warming vulnerable methane are emitting more methane with the amplified increasing Arctic warming. This includes the destabilization of the methane that is contained in the form of hydrates and free gas in the Arctic seabed. Atmospheric methane is now on a renewed sustained increase - this time due to planetary methane emissions.

Without getting a rapid risk assessment of this situation there seems no hope of any measures to address it. The UN climate negotiations for world emissions reductions are on hold till 2020. Emissions have never been higher and are increasing and the only plan is to burn more fossil fuels and of the worst kind.

Leading climate experts say we are now committed to a warming over 2C, probably to 3C and possibly 4C. We are on track for 6C by 2100. Even an all out emergency scale response would not see any reduction of atmospheric GHGs for many decades.

We call for an urgent high-level risk assessment to capture all these adverse trends and situations. An Arctic climate risk assessment is needed to address the unprecedented risks that are threatening the security of the U.S., the Northern hemisphere and the world at large, and the well-being of both current and future generations.

Above call for a high-level risk assessment was initiated by Dr. Peter Carter of the Climate Emergency Institute. Please try and improve this message and see that it finds its way to the people who need to see this and take action, including leading climate scientists, doctors, politicians and those holding public office positions with a duty of care.