Fossil fuel combustion creates carbon emissions that increase atmospheric thickness, warming climate. The occurrence of wildfire increases with climate warming, increasing soot loading of the atmosphere. Some of this soot is transported through the atmosphere and is deposited on glaciers, lowering their reflectivity, increasing solar energy absorption, increasing melt rates.

In parts of Greenland where winter snow loss during each melt season exposes impurity-rich bare ice, the surface reflectivity drops from 85% to 30%. Consequently, most of the 24-hour sunlight goes into ice melt. In this Dark Zone, the impact of soot manifests strongest in a self-reinforcing feedback loop that research by Jason Box has shown to have doubled melt rates in the past decade. 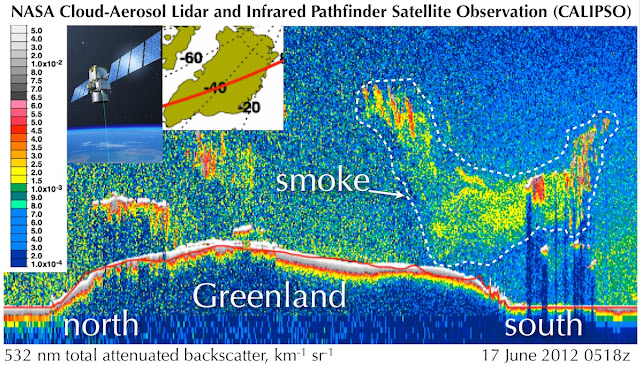 To measure the extent to which soot particles enhance melting, Jason Box is organizing a Greenland ice sheet expedition for 2013. The Dark Snow Project expedition is to be the first of its kind, made possible by crowd-source funding.

- Glaciers cracking in the presence of carbon dioxide
http://arctic-news.blogspot.com/2012/10/glaciers-cracking-in-the-presence-of-carbon-dioxide.html