An earlier post reported average hourly methane measurements as high as 2500 ppb recorded at Barrow, Alaska. Sadly, hardly any further in situ measurements have been publicly released from Barrow since, as illustrated by the image below. 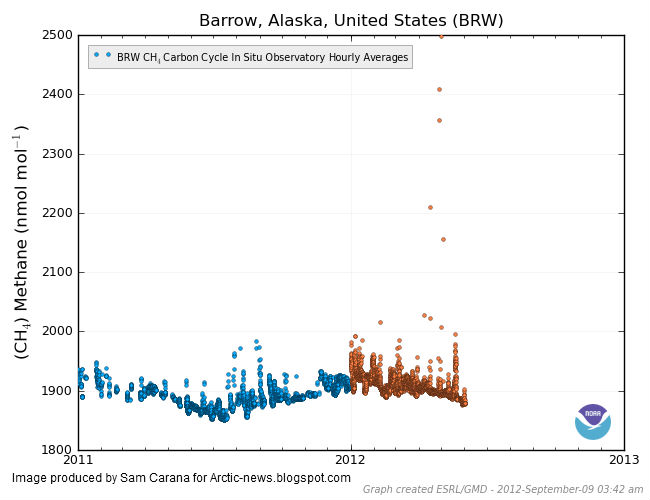 Flask measurements continue to be available and the five most recent measurements show levels well over 2000 ppb. 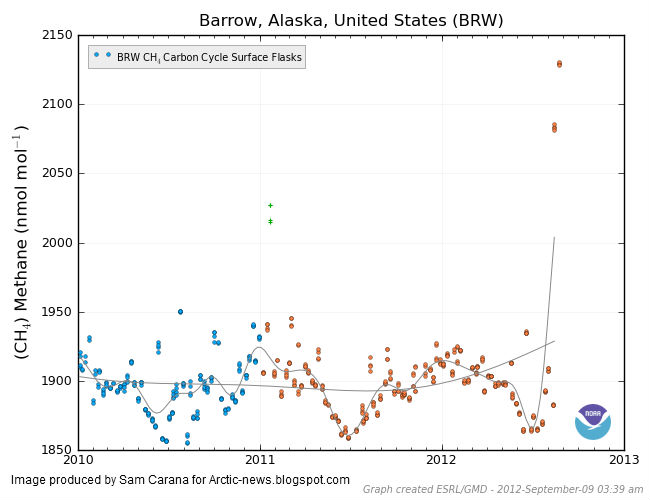 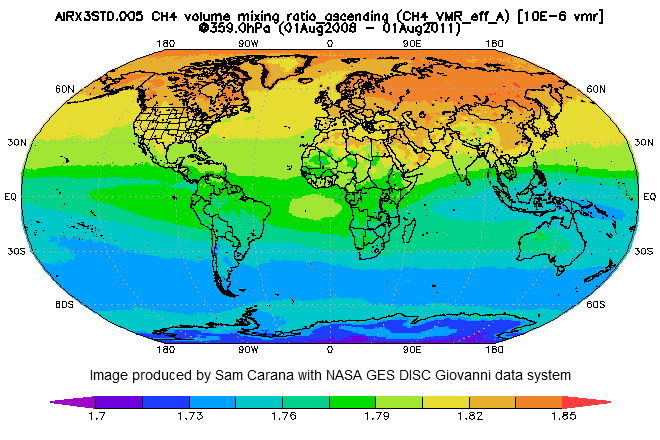 The image below shows methane levels over a period of a more recent year, from August 1, 2011, to August 1, 2012. There is a marked increase of methane at higher latitudes, compared to the earlier three years. 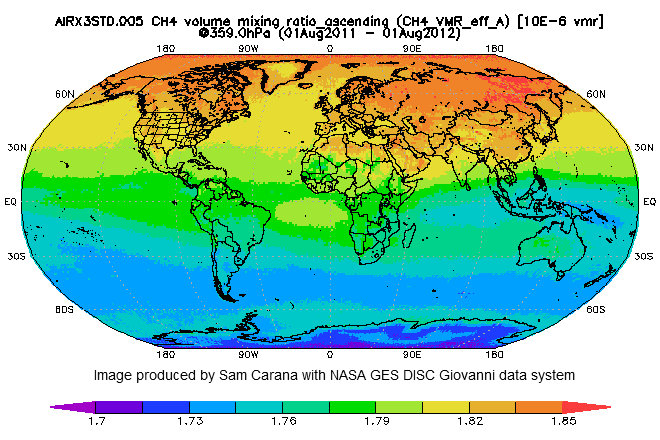 The image below shows methane levels in August 2012, with high levels showing up at many places. 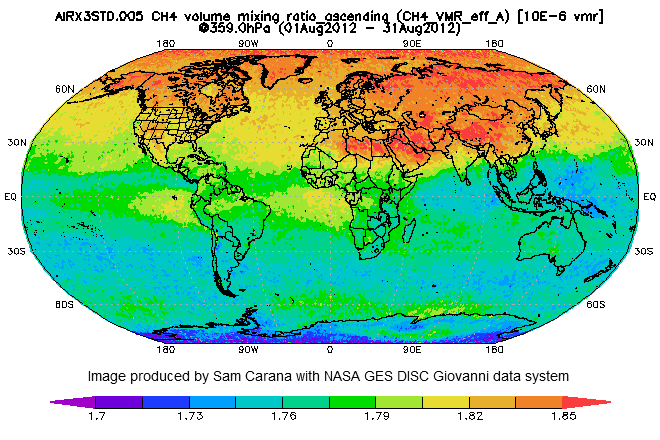 The image below shows the most recent methane level measurements available, from September 1, 2012, to September 7, 2012. High levels of methane show up at even more places, such as in the Arctic to the north of North America. 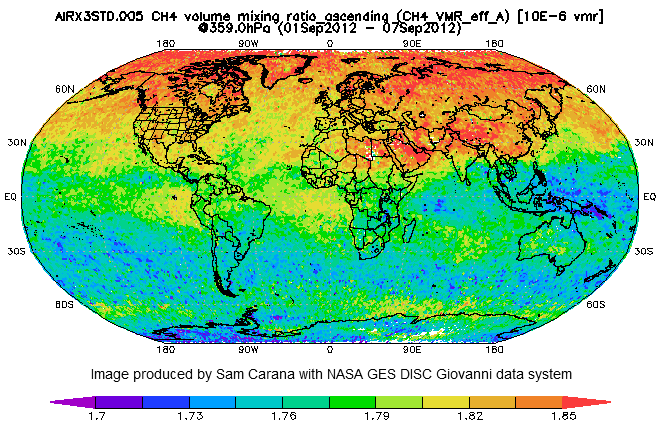 Around this time of year, there will typically be a lot of methane at many locations on the Northern Hemisphere. The image below allows a comparison of the 2012 period with the same period last year. In early September 2011, there was not quite as much methane as there now is north of Alaska, in Greenland and along the Siberian coast. There was a lot of methane in China last year in this period in 2011, though, and the situation appears to have improved somewhat this year. 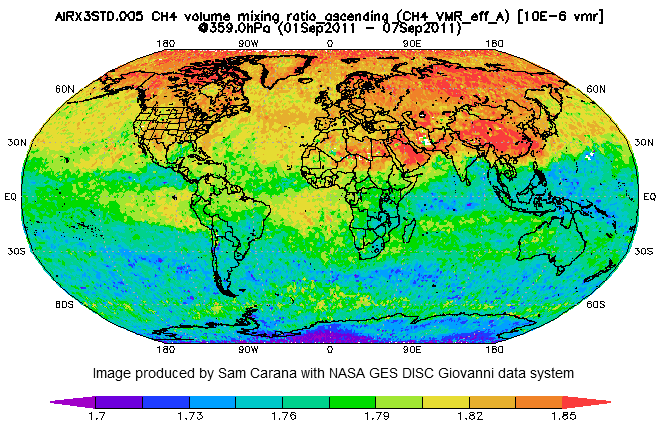 To compare things further, an image is added below showing methane levels during the same period in 2010. 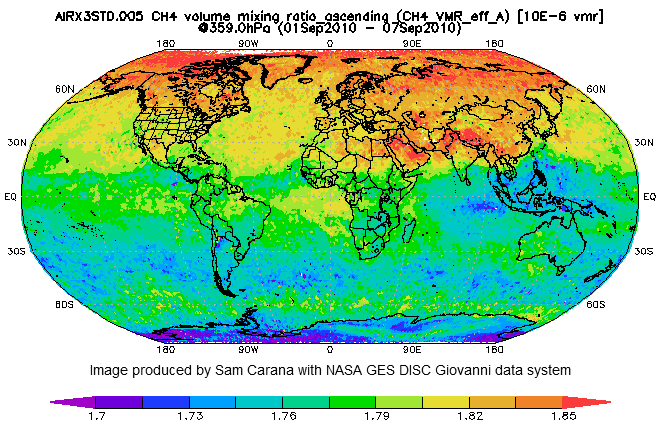 Below are added images produced by Dr. Leonid Yurganov from IASA data. Note that the scales are slightly different. The images confirm the presence of high levels of methane in the Arctic Ocean north of Siberia. Further below a combination picture showing the significant rise of methane levels in that area between October 2008 and October 2011. 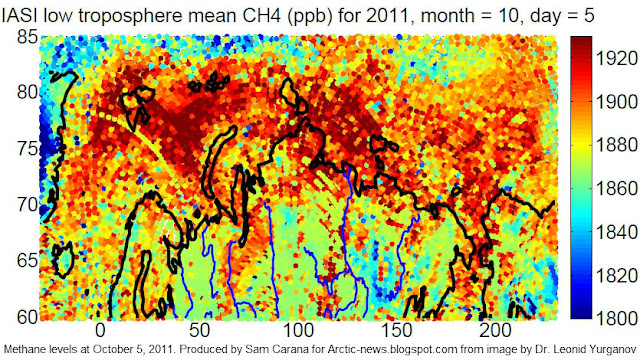 The images highlight a number of concerns:
Methane is more than 100 times as potent as a greenhouse gas as carbon dioxide over 20 years, and even more potent over shorter periods. This makes methane a very powerful warming factor in the Arctic. While the Arctic is already warming more than three times as fast as the rest of the world, the sea ice still acts as a buffer to prevent even more acceleration of warming in the Arctic, but this situation will deteriorate dramatically as the sea ice disappears, as Professor Peter Wadhams recently described.