Loss of Arctic sea ice is effectively doubling mankind's contribution to global warming. Increased absorption of the sun's rays is "the equivalent of about 20 years of additional CO2 being added by man", Professor Peter Wadhams said in the BBC article: Arctic ice melt 'like adding 20 years of CO2 emissions', by Susan Watts, September 5, 2012.

For more details on Professor Wadhams' calculations, see the earlier post Albedo change in the Arctic. 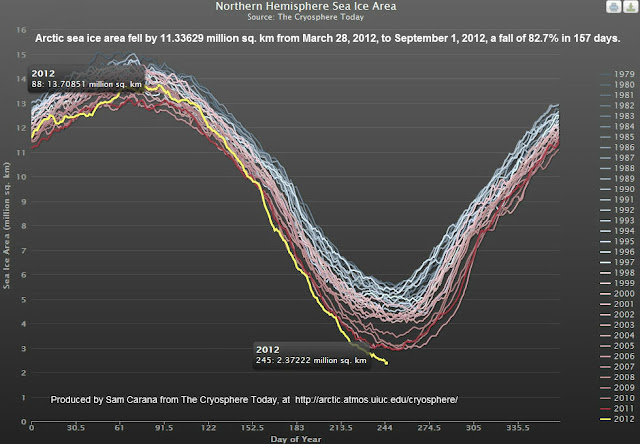 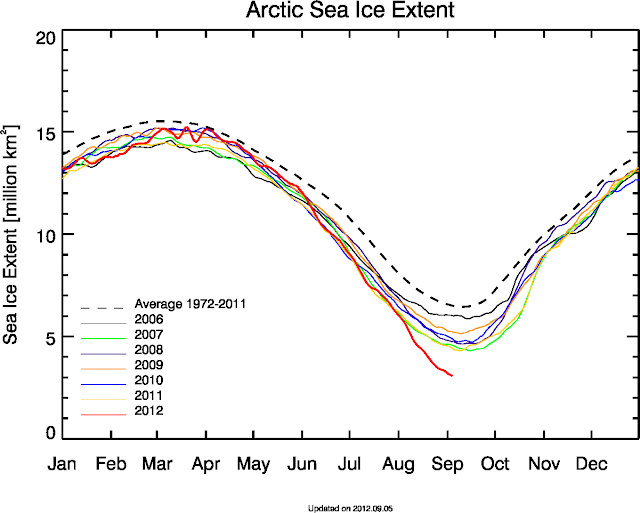 There still are quite a few days to go in the melting season, so the fall could be even more dramatic.

Peter Wadhams adds:  “The point about summer conditions is that as long as there is SOME ice present on the sea surface, however thin the layer, then the ocean temperature below it is held to 0 degrees Celsius because the absorbed solar radiation melts the ice rather than warming the water. Also the atmospheric temperature is held to close to 0 degrees Celsius because warmer air melts the surface snow layer on top of the ice and is thereby cooled. The sea ice, even when thinned, continues to act with 100% efficiency as an air conditioning system for ocean and atmosphere alike.”

“BUT”, Prof Wadhams continues, “as soon as the sea ice layer goes, this process ceases and the sea can warm up rapidly (to typically 7 degrees Celsius by the end of summer - which is not much colder than the North Sea), as can the atmosphere (which speeds up Greenland ice sheet melt when that warmed air passes over Greenland). Latent heat is an enormously powerful buffer - the amount of heat that you have to pump in to melt 1 kg of ice will subsequently heat that same amount of melted water to 80 degrees Celsius. So once the ice goes away entirely there is a big jump in temperatures in the upper ocean and atmosphere (with dire consequences for permafrost), and it is very difficult to see how one can ever go back to an ice-covered summer ocean once this has happened.”

Indeed, there is a danger that loss of the sea ice will weaken the currents that currently cool the bottom of the sea, where huge amounts of methane may be present in the form of free gas or hydrates in sediments. This danger is illustrated by the image below by Reg Morrison. 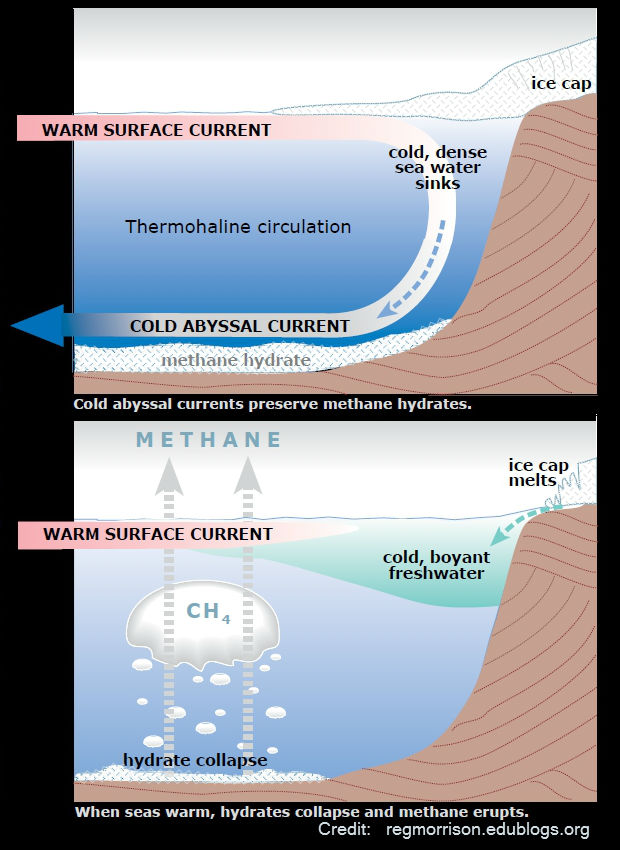 The image below, from a study by Polyakov et al., shows temperature differences in the vertical water column at selected stretches of water in the Arctic over the years.