The image below shows an unusually large and powerful cyclone that was churning over the Arctic in early August 2012. Two smaller systems merged on August 5 to form the storm, which at the time occupied much of the Beaufort-Chukchi Sea and Canadian Basin, reports NASA Earth Observatory. On average, Arctic cyclones last about 40 hours; as of August 9, 2012, this storm had lasted more than five days.

This cyclone’s central sea level pressure reached about 964 millibars on August 6, 2012—a number that puts it within the lowest 3% of all minimum daily sea level pressures recorded north of 70 degrees latitude, noted Stephen Vavrus, an atmospheric scientist based at the University of Wisconsin.

NASA’s Aqua satellite captured above natural-color mosaic image on August 6, 2012. The center of the storm at that date was located in the middle of the Arctic Ocean.

The combined screenshots (6 & 8 August) below from Oceanweather Inc give an idea of size of the waves churned up by the cyclone. 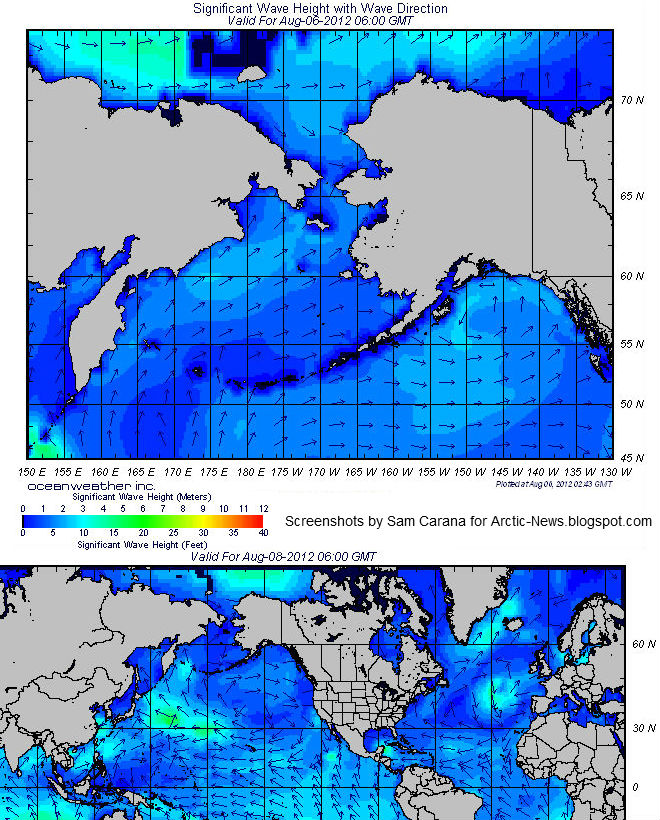 The storm came in from Siberia, intensified and then positioned itself over the central Arctic, engendering 20 knot winds and 50 mph wind gusts, reports Skeptical Science.

The Arctic Sea Ice Blog covered the unfolding events well, in a series of posts including:
Many excellent comments were also added underneath these posts, e.g. by Steve Coulter who noted that "when fragmented floes are present, each irregular piece of ice acts as a sail in the wind, so the wind transfers momentum more readily to the surface. And each piece of ice, being 90% submerged, quite effectively transfers that momentum to the water. With winds moving in essentially a single direction in any given area, vast volumes of surface water are more readily put into motion. The difference in motion between the surface and deep water inevitably creates mixing."

Such mixing could mean that sediments that have been frozen until now get exposed to warmer water. This could destabilize methane contained in such sediments, either in the form of free gas or hydrates.

"There are at least three positive feedbacks working together to reinforce one another - and now a fourth on salinity:
These feedbacks are dangerous for methane. AMEG has been warning that, as the sea ice retreats, storms will warm the sea bed, leading to further release of methane. In ESAS, we only need mixing to a depth of 50 metres - so a storm capable of mixing to 500 metres will really stir things up.

These feedbacks are also dangerous for food security, already damaged through climate extremes induced by Arctic warming, hence our piece in the Huffington Post.

The only way to head off catastrophe is to cool the Arctic, which must involve geoengineering as quickly as possible. We must try to remain positive and determined about this, despite the gloomy news." 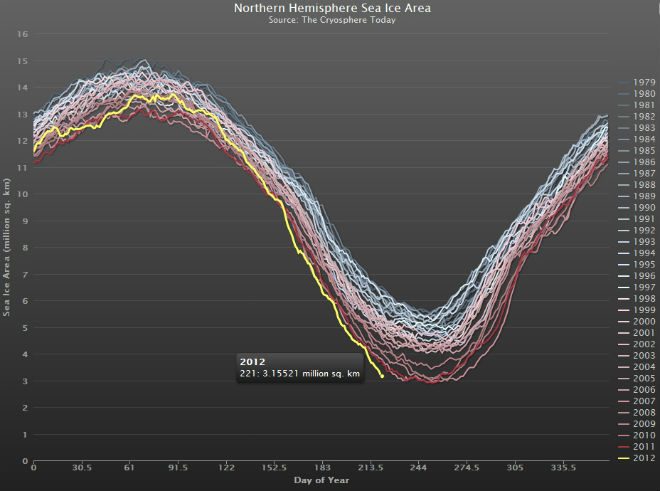 The 30-days animation below, from the Naval Research Laboratory, show the recent ice speed and drift.

The 30-days animation below, also from the Naval Research Laboratory, show recent decline of the thickness of the sea ice.