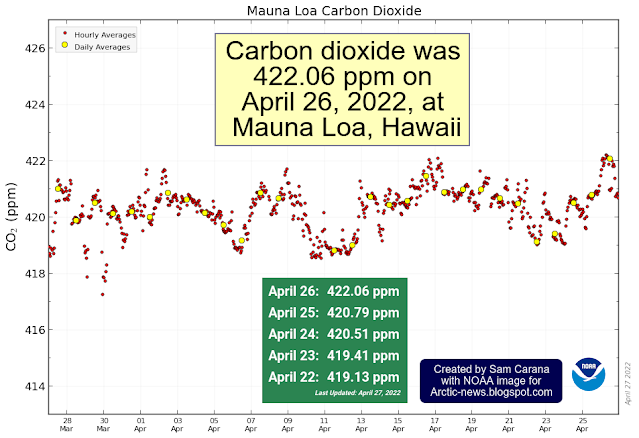 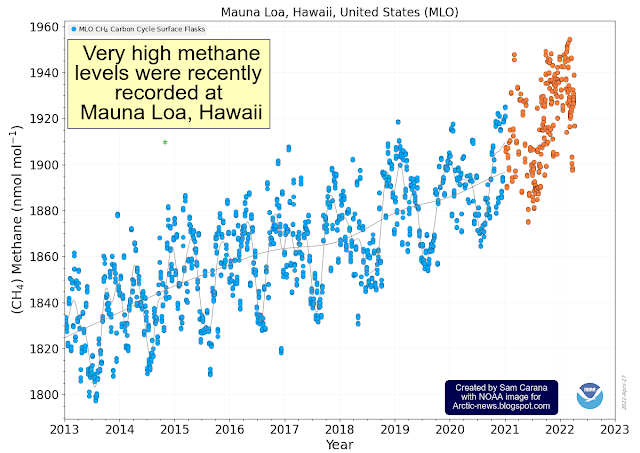 Clouds tipping point
A methane concentration of 1955 ppb corresponds, at a Global Warming Potential (GWP) of 200, with a carbon dioxide equivalent (CO₂e) of 391 ppm. Together with the above daily average CO₂ concentration of 422.06 ppm this adds up to a joint CO₂e of 813.06 ppm, i.e. less than 387 ppm away from the clouds tipping point (at 1200 ppm CO₂e) that on its own could raise the global temperature by 8°C.
Such a 387 ppm CO₂e could be added almost immediately by a burst of seafloor methane less than the size of the methane that is currently in the atmosphere (about 5 Gt). There is plenty of potential for such an abrupt release, given the rising ocean heat and the vast amounts of methane present in vulnerable sediments at the seafloor of the Arctic Ocean, as discussed in posts such as this one. 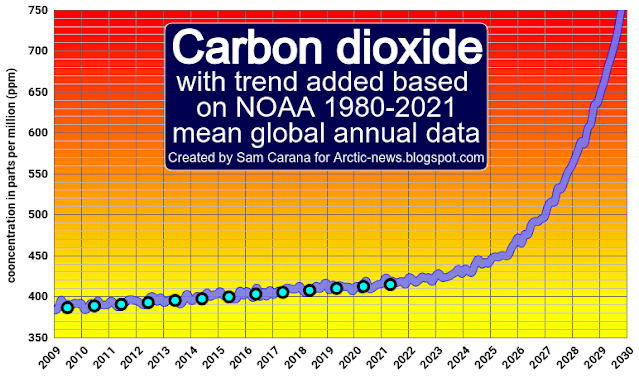 The above image shows methane concentration with a trend added, based on NOAA 2008-2021 mean global annual methane data, illustrating how methane concentration could cross 4100 ppb by the end of the year 2029 and how methane's impact could cross 820 ppm CO₂e by the end of the year 2029.
As illustrated by the image below, 750 ppm carbon dioxide and 820 ppm CO₂e methane would together yield a joint CO₂e of 1570 ppm and thus would have already raised the global temperature by 8°C due to the clouds feedback much earlier than 2029, while the temperature rise would also have been driven up by the higher carbon dioxide and the methane concentrations. 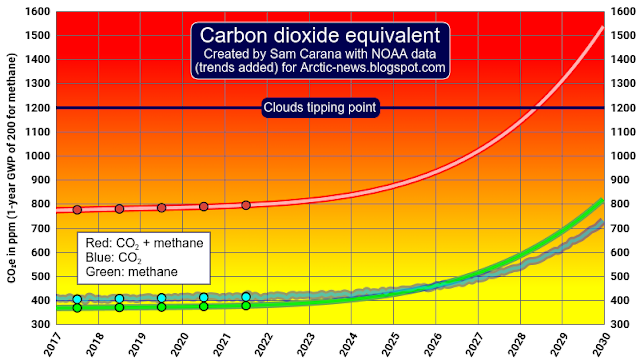 Furthermore, nitrous oxide is also rising and there are many further forcers, as discussed at the Extinction page. Altogether, there is the potential for a temperature rise of well over 18°C by 2026, as discussed in an earlier post. 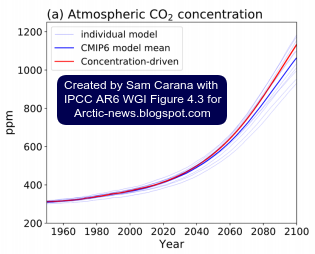 Such high carbon dioxide concentrations could occur due to forest fires causing soils to burn (especially peat soils), which can also add vast amounts of methane to the atmosphere.
The IPCC does contemplate high carbon dioxide scenarios (see image right), but as discussed in an earlier post, does not mention the clouds tipping point. 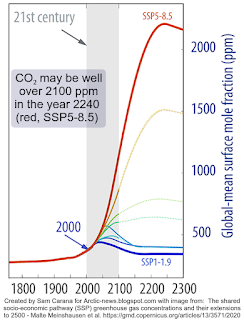 In the image on the right, from a 2020 analysis by Malte Meinshausen et al., the SSP5-8.5 scenario is extended to the year 2300 and a carbon dioxide concentration of well over 2100 ppm is reached around 2240.

In conclusion, there is plenty of scientific consideration of the potential for high concentrations of carbon dioxide and methane to eventuate, but it is typically ignored or waved away as too distant in the future to worry about.

In other words, what's lacking is analysis of abrupt catastrophic climate change.

The image below expands risk assessment beyond its typical definition as the product of the severity of impact and probability, by adding a third dimension: timescale. 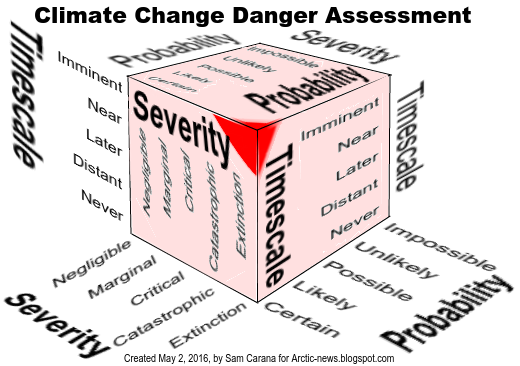 Water in soil and atmosphere 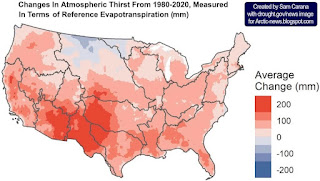 The image on the right, from a news release associated with a recent study, shows changes in atmospheric thirst, measured in terms of reference evapotranspiration from 1980-202 (in mm).

As temperatures rise due to people's emissions, more evaporation will take place over both land oceans, but not all water will return as precipitation, so more water vapor will stay in the air.
The water-holding capacity of the atmosphere increases by about 7% for every 1°C (1.8°F) rise in temperature, in line with the Clausius–Clapeyron relation.
In many cases, this means drier soils and vegetation, making vegetation more vulnerable to pests and diseases, and more prone to fire hazards.
Water in the soil acts as a buffer, slowing down the temperature rise, so drier soil will heat up faster and further, causing land surface temperatures to rise even more and amplifying the impact of Urban heat island and Heat dome phenomena.

As temperatures rise, extreme weather events increase in frequency and intensity. The duration of extreme weather events can also increase, due to blocked weather patterns resulting from changes to the Jet Stream.
This contributes to shortages in food and water supplies. As long as glaciers are melting in the mountains, rivers will keep supplying some water, but the snow and ice cover is disappearing rapidly around the globe.
The image on the right shows that food prices have risen strongly over the past few years and extreme weather events resulting from the global temperature rise have strongly contributed to the price rise.
Further contributing to this rise is the rising demand for fertilizers that are currently all too often produced with fossil fuel, as political will to produce food in better ways remains lacking.
Heat stress

Another issue is humidity. The more water vapor there is in the air, the harder temperature peaks are to bear.
The human body can cool itself by sweating, which has a physiological limit that is often described as a 35°C wet-bulb temperature.
A 2020 study (by Raymond et al.) warned that this limit could be regularly exceeded with a temperature rise of less than 2.5°C (compared to pre-industrial).

Meanwhile, recent research found that in practice the limit will typically be lower and depending on circumstances could be as low as a wet-bulb temperature of 25°C.
In the video below, Paul Beckwith discusses the danger of combined high heat and humidity.


In the video below, Guy McPherson also discusses the danger of combined high heat and humidity.

Extinction
A 2018 study (by Strona & Bradshaw) indicates that most life on Earth will disappear with a 5°C rise. Humans, who depend for their survival on many other species, will likely go extinct with a 3°C rise, as illustrated by the image below, from an earlier post.

Conclusion
This further highlights the imminence of the danger and adds further urgency to the call for immediate, comprehensive and effective action, as described in the Climate Plan.
Links

• The Importance of Methane
https://arctic-news.blogspot.com/p/the-importance-of-methane-in-climate.html

• The emergence of heat and humidity too severe for human tolerance - by Colin Raymond et al.
https://www.science.org/doi/10.1126/sciadv.aaw1838