A catastrophe of unimaginable proportions is unfolding. Life is disappearing from Earth and all life could be gone within one decade. Study after study is showing the size of the threat, yet many people seem out to hide what we're facing.

In the Arctic alone, four tipping points look set to be crossed within a few years:

Crossing these tipping points triggers a number of feedbacks that kick in at accelerating speed, including even more absorption of heat by the Arctic Ocean, further changes to the Jet Stream resulting in even more extreme weather, seafloor methane release, water vapor feedback and emissions from land such as CH₄ (methane), N₂O (nitrous oxide) and NOₓ (nitrogen oxide), due to permafrost melt, storms and forest fires. Temperatures also threaten to rise strongly over the next few years as sulfate cooling falls away while more black carbon and brown carbon gets emitted as more wood gets burned and more forest fires occur.

A recent study points at yet another tipping point, i.e. the disappearance of marine stratus clouds, which could result in a global temperature rise of eight degrees Celsius (8°C or 14.4°F). In the model used in the study, the tipping point starts to occur at 1,200 ppm CO₂e, i.e. a stack of greenhouse gases including CH₄, N₂O, CO₂ and H₂O, and changes in clouds resulted in global surface warming of 8°C at 1,300 ppm CO₂e, as stratocumulus decks did break up into cumulus clouds and evaporation strengthened, and average longwave cooling at the level of the cloud tops dropped to less than 10% of what it was in the presence of stratocumulus decks.

This 8°C rise would come on top of the warming that would already have occurred due to other warming elements, resulting in a total rise of as 18°C or 32.4°F from preindustrial, as pictured on the right and below.

What would it take to reach 1200 ppm CO₂e? The IPCC's AR4 contains a scenario of 1,200 ppm CO₂e getting reached with a corresponding temperature rise of between ~5°C and ~10°C above preindustrial. NOAA's figures for greenhouse gases add up to a current level of 500 ppm CO₂e. NOAA's figure for methane's GWP is too low, especially when considering a rise within a decade. When using this 500 ppm CO₂e, it would take 700 ppm to reach 1,200 ppm, and if 1 ppm equals 7.81 Gt of CO₂, then 700 ppm equals 5467 Gt of CO₂, which may seem a lot, but at a GWP for methane of 130 (10-year horizon) it could be reached instantly with a burst of methane of some 42 Gt, i.e. less than Natalia Shakhova's warning that 50 Gt of methane is ready for release at any time. In above image, further warming elements are included, in addition to methane and CO₂ and it takes until the year 2026.

As an earlier study points out, life on Earth will already have disappeared with a 5°C rise (see box on the right).

How precious life is

It took a long time for life to evolve on Earth. At first, hardly any species could live on land, as there was no ozone layer to protect them from UV radiation. Also, there was no oxygen in the air to breathe. Life formed some 3 billion years ago and bacteria first developed the ability to decompose carbon dioxide (and produce oxygen) some 2.3  billion years ago.

Then, worm-like creatures started to multiply strongly, using more and more oxygen and producing more and more carbon dioxide. Eventually, this resulted in a sharp fall in oxygen levels, leading to extinction of these species. This first mass extinction was followed by a spike in oxygen as both the species in the oceans and plants on land continued to produce oxygen, while these first animals went extinct.

Temperature changes dominate in subsequent mass extinctions, and each time it took life a long time to recover. We've now entered the Sixth Mass Extinction, as oxygen levels are falling, oceans are acidifying and species are going extinct at accelerating rates. A 2013 study calculated that species are facing warming that occurs 10,000 x faster than their natural ability to adapt.

The speed at which temperatures and greenhouse gas levels are now jointly rising is so large and so unprecedented in Earth's history that many doubt that there will be any life left on Earth by 2026. 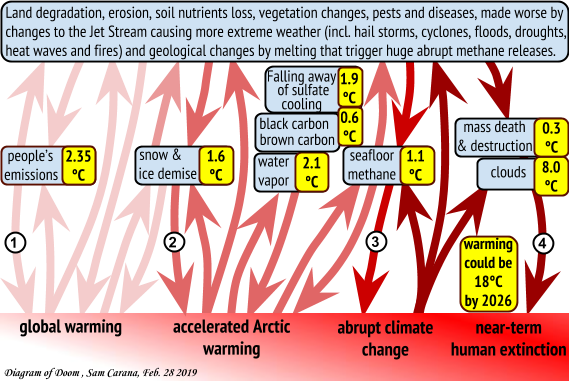 Can humanity change its course?

Given that humanity appears to be on a course to omnicidal destruction, what position can we best take in response? In the light of the dire situation, dramatic reduction in pollution is needed, as well as further action. Indeed, the Paris Agreement constitutes a global commitment to comprehensive and effective action. The Climate Plan calls for multiple parallel lines of action (the green lines on the image below). 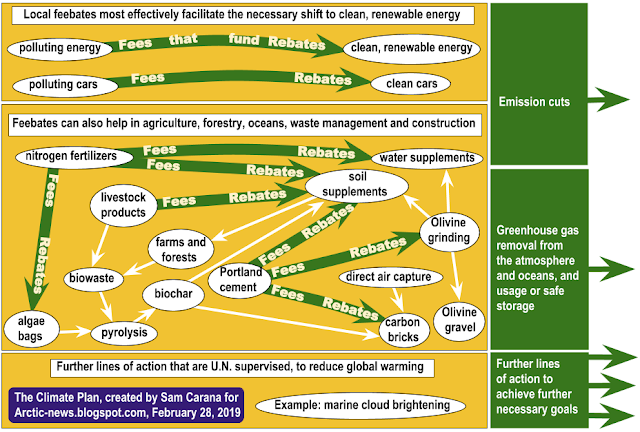 Where progress is lacking, swift escalation is recommended as follows: 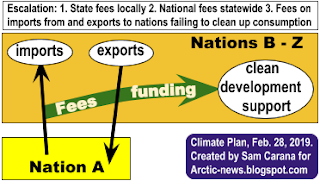 Warm air and water moving toward the Arctic Ocean

The need for action such as marine cloud brightening is illustrated by the following two images. The image below shows that, despite the presence of large amounts of meltwater off the North American coast, sea surface temperatures on March 2, 2019, were as much as 13.8°C or 24.8°F warmer than during 1981-2011, indicating how much more ocean heat is now carried to the Arctic Ocean along the Gulf Stream.

How is it possible for anomalies to get this high? As the Arctic is warming up faster than the rest of the world, the Jet Stream is becoming more wavy. A more wavy Jet Stream enables more cold air to move out of the Arctic. As a result, cold Arctic air can descend deep into the North American continent. At the same time, a more wavy Jet Stream enables more warm air and water to move into the Arctic. This is illustrated by the February 24, 2019, combination image that shows temperature on the left and the Jet Stream on the right. 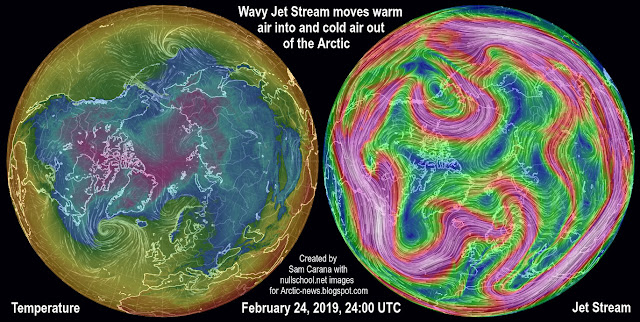 As oceans get warmer, the temperature difference between land and oceans also increases in Winter. This larger temperature difference results in stronger winds that can carry more warm, moist air north in the North Atlantic. These winds can also speed up the amount of heat carried by the Gulf Stream toward the Arctic Ocean, with the threat that a large influx of warm, salty water will destabilize sediments at the seafloor of the Arctic Ocean and trigger eruption of huge amounts of methane.

In conclusion, the situation is dire and calls for comprehensive and effective action, as described at the action, policies and feebates pages at the Climate Plan.