There is no Carbon Budget 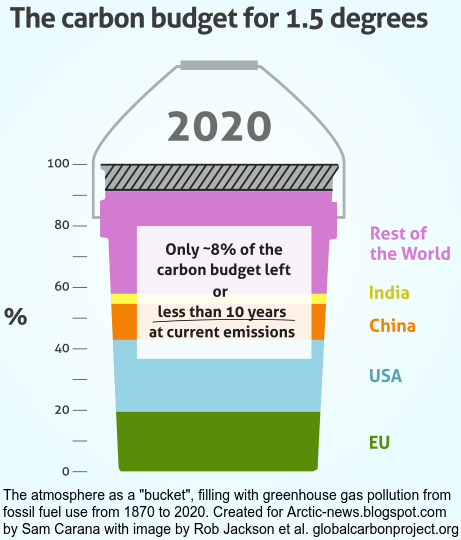 In the above image, the atmosphere is presented as a "bucket" filling with greenhouse gas pollution from fossil fuel use from 1870 to 2020. The image depicts the idea that there is some carbon budget left, before 1.5°C above pre-industrial will be reached. The Global Carbon Project has just issued an update of what it refers to as the Global Carbon Budget.

The Global Carbon Project insists that there still is some carbon budget left, even as global fossil fuel C₂O emissions in 2021 were higher than 2020, and are projected to be higher again in 2022 than 2021, as illustrated by the image on the right.

Arctic-news has long said that the suggestion of a carbon budget is part of a narrative that polluters seek to spread, i.e. that there was some budget left to be divided among polluters, as if polluters could safely continue to pollute for years to come before thresholds would be reached that could make life uncomfortable, such as a rise of 1.5°C above pre-industrial.

For starters, an earlier analysis warns that the 1.5°C threshold may have already been crossed long ago. The situation looks set to soon become even more catastrophic. The upcoming El Niño could make a difference of more than 0.5°C over the next few years. Additionally, there will be a growing impact of sunspots, forecast to peak in July 2025.

Arctic-news has long warned about rising temperatures, not only due to high greenhouse gas levels, but also due to a number of events and developments including a rise of up to 1.6°C due to loss of Arctic sea ice and permafrost, and associated changes, a rise of up to 1.9°C due to a decrease in cooling aerosols, and a rise of up to 0.6°C due to an increase in warming aerosols and gases as a result of more biomass and waste burning and forest fires.
More recent posts also warn that the rise could cause the clouds tipping point at 1200 ppm CO₂e to be crossed. Accordingly, the total temperature rise could be as high as 18.44°C from pre-industrial by 2026. Keep in mind that humans are likely to go extinct with a rise of 3°C, as discussed in an earlier post.
So, there is no carbon budget left. There is just a huge amount of carbon to be removed from the atmosphere and oceans, a "debt" that polluters would rather be forgotten or passed on to future generations.

This "debt" has been growing since well before the industrial revolution started. Long ago, people should have started to reduce emissions and remove greenhouse gases, as well as take further action to improve the situation, and Arctic-news has long said that comprehensive and effective action must be taken without delay.
The situation is dire and the right thing to do now is to help avoid or delay the worst from happening, through action as described in the Climate Plan and at the recent post Transforming Society.

• The upcoming El Nino and further events and developments (2022)
https://arctic-news.blogspot.com/2022/11/the-upcoming-el-nino-and-further-events-and-developments.html