In 2020 and 2021, the global network of the World Meteorological Organization (WMO) detected the largest within-year increases (15 and 18 ppb, respectively) of atmospheric methane (CH₄) since systematic measurements began in the early 1980s.

The WMO adds that analyses of measurements of the abundances of atmospheric CH₄ and its stable carbon isotope ratio ¹³C/¹²C (reported as δ¹³C(CH₄)) indicate that the increase in CH₄ since 2007 is associated with biogenic processes.

Methane's rise has been accelerating since 2007, which makes this a scary suggestion, as increasing decomposition of plant material as a result of climate change is a self-reinforcing feedback loop that is hard to stop.

Interestingly, a different explanation is pointed at in the 2019 analysis is shale gas a major driver of recent increase in global atmospheric methane?.

Another explanation, discussed in an earlier post, is that there was a slowdown from 1984 to 2004 in the rise of methane as a result of rising temperatures increasing the water vapor in the atmosphere, resulting in more hydroxyl decomposing more methane in the atmosphere in the 1990s (compared to the 1980s). Accordingly, while the rise in methane concentration appeared to slow down over those years, methane emissions actually kept growing and continued to do so at accelerating pace, but since an increasingly large part of methane was decomposed by hydroxyl, this continuing rise in methane emissions was overlooked.

Sadly, there are few measurements available for methane that could erupt from the seafloor of the Arctic Ocean. Moreover, WMO and NOAA data that are used to calculate global means are typically taken at marine surface level, which may be appropriate for carbon dioxide that is present more strongly at sea surface level, but methane is much lighter and will rise quickly and accumulate at higher altitude, as indicated by the satellite images further below. Moreover, the lack of measurements of methane over the Arctic Ocean and at higher altitudes makes it hard to determine from where the methane originated. Much methane could originate from the seafloor of the Arctic Ocean and rise to the Tropopause, while moving from there closer to the Equator, all largely without getting reported.

So, what's happening in 2022? Well, it appears that the rise in methane keeps accelerating, as illustrated by the image below showing daily average methane measurements at Mauna Loa, Hawaii, since 2001. 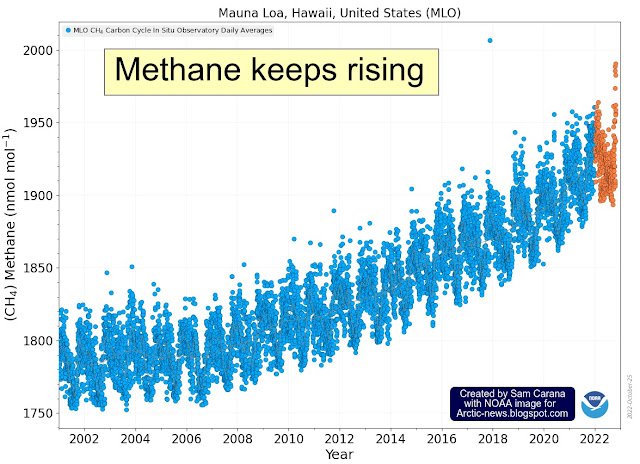 The image below shows methane in situ measurements at Barrow, Alaska, indicating that methane is present in even higher abundance over the Arctic and that levels are rising fast over the Arctic. 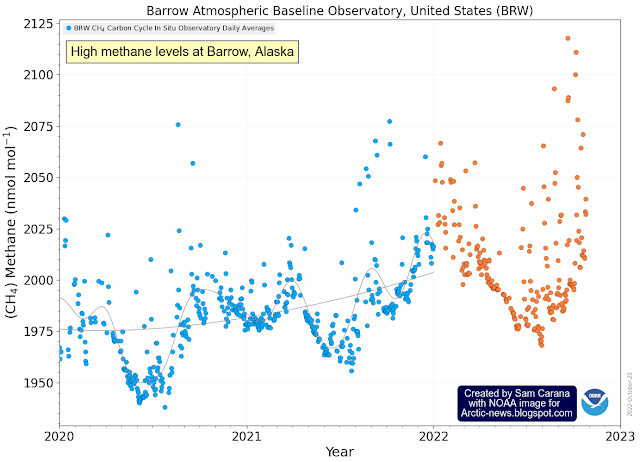 The image below, adapted from Copernicus, shows a forecast for October 27, 2022, 03 UTC at 500 hPa. High levels of methane show up over the Arctic. 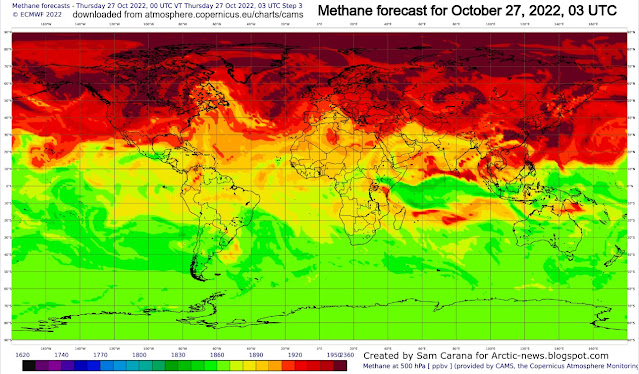 The MetOp-B satellite recorded a mean methane level of 1981 ppb at 293 mb on October 2, 2022 am, while plenty of methane was present over the Arctic Ocean at the three altitudes shown on compilation image below. 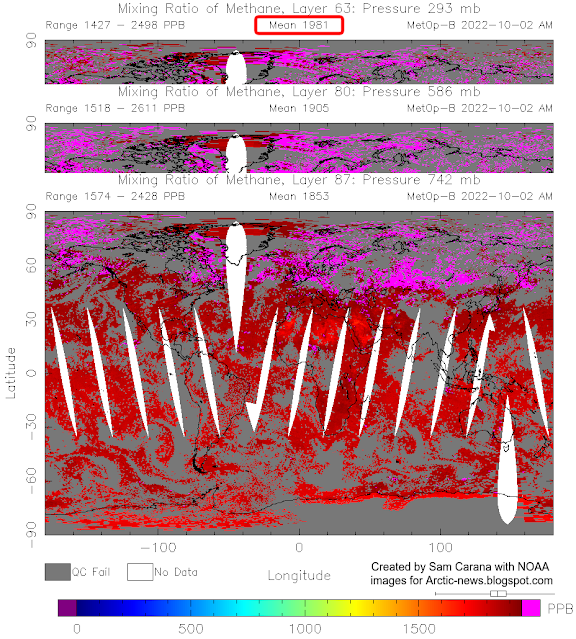 The MetOp-B satellite recorded a peak methane level of 2901 ppb at 293 mb on October 20, 2022 am, while plenty of methane was again present over the Arctic Ocean at the three altitudes shown on the compilation image below. 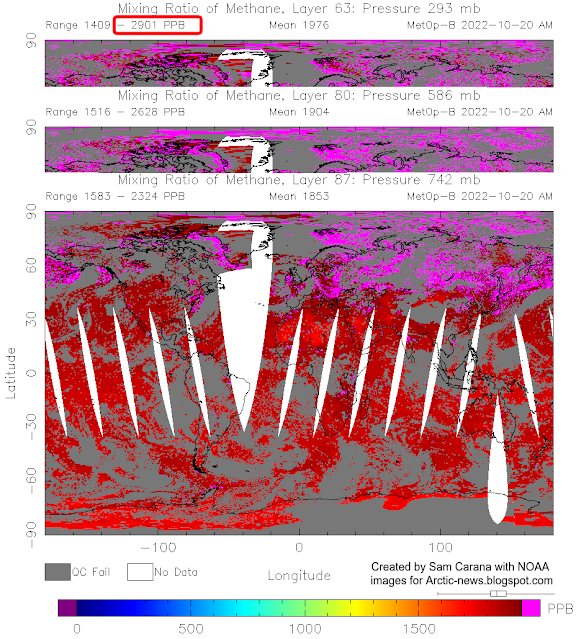 This supports the possibility that large amounts of methane are getting released from the Arctic Ocean, with even more to follow.
While the IPCC keeps hiding the potential for a huge rise in temperature by 2026, as discussed in an earlier post, a recently-published article points out that prudent risk management requires consideration of bad-to-worst-case scenarios.
How bad could it be? A 2016 analysis warned that there could be a temperature rise of more than 10°C from pre-industral by 2026. An additional danger is that, as methane keeps rising, the clouds tipping point could be crossed even earlier than in 2026. Let's re-evaluate these dangers.

The above 1981 ppb mean methane level translates into 396.2 ppm CO₂e at a 1-year GWP of 200. Destabilization of sediments at the seafloor of the Arctic Ocean could cause a large abrupt burst of methane to enter the atmosphere over the Arctic Ocean. A doubling of the mean methane level could push up the mean methane level to twice as much, to 792.4 ppm CO₂e, which is only 407.6 ppm CO₂ away from the 1200 ppm CO₂e clouds tipping point that on its own could push up the temperature by some 8°C globally. This gap of 407.6 ppm CO₂ could be more than covered by the current carbon dioxide level. The September 2022 CO₂ level at Mauna Loa was higher than that, i.e. 415.96 ppm. Since the CO₂ level at Mauna Loa in September typically is at its lowest point for the year, this implies that a large abrupt burst of methane could cause the the clouds tipping point to be instantly crossed due to methane and CO₂ alone.

Note that there are additional forcers, such as CFCs, while there are also further events and developments that could additionally speed up the temperature rise, as further discussed below. The scary situation therefore is that the clouds tipping point could be instantly crossed with a burst of methane that is far smaller in size than the methane already in the atmosphere. Such a burst of methane could be released at any time, as discussed in earlier posts such as this one.
That's not even the worst-case scenario. In the above calculation, global mean methane levels are used. However, there is a possibility that low-lying clouds could at first break up and vanish abruptly at one specific point, due to a high methane peak, and that this could lead to break-up of neighboring clouds, propagating break-up across the globe and thus pushing up the temperature rise virtually instantly by some 8°C globally.

How high could the temperature rise be by 2026?

There are a number of scenarios that could cause the clouds tipping point to be crossed soon, e.g. if the rise in methane kept following a trend as depicted in the image below, showing WMO 2015-2021 global annual surface mean methane abundance, with a trend added.
The trend points at a potential mean global abundance of methane of more than 700 ppm CO₂e by the end of 2026, implying that when including further forcers the clouds tipping point could be crossed in 2026. Furthermore, the trend points at 1200 ppm CO₂e getting crossed in 2028 due to the forcing of methane alone.
Even without such an increase in methane, a huge temperature rise could eventuate by 2026, first of all due to a cataclysmic alignment of El Niño and sunspots. 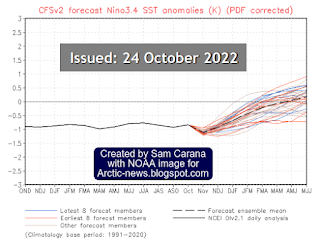 We are currently in the depths of a persistent La Niña, as illustrated by the image on the right, adapted from NOAA, and this suppresses the temperature rise at the moment.
The next El Niño is already overdue, so the peak of the next El Niño may well coincide with a peak in sunspots which look set to reach a higher than expected maximum impact around July 2025. The rise in sunspots from May 2020 to July 2025 could make a difference of some 0.15°C, concluded an earlier post.
Moving from the bottom of the current La Niña to the peak of a strong El Niño could make a difference of more than half a degree Celsius, as indicated by the image below, adapted from NOAA.

Therefore, the rise due to the combined impact of El Niño and sunspots could be 0.65°C by 2025. When adding this to the temperature rise that has already occurred and that, when measured from pre-industrial could be as high as 2.29°C, the total land-ocean global temperature rise could be as high as 2.94°C by 2025,  while the rise on land on the Northern Hemisphere could peak at more than 3°C above pre-industrial, noting that when there was a strong El Niño in February 2016, the land-only monthly anomaly from 1880-1920 was 2.95°C, as illustrated by the image below.
Such a huge rise could cause heatwaves and droughts that could result in a huge peak in power demand, as everyone switches on their air conditioners, while at the same time rivers could either dry up or their water could become too hot to cool power plants. This could bring the grid down, which would mean that coal-fired power plants would stop emitting sulfates.
This could mean that equipment and appliances that need electricity such as heaters and air conditioners could stop working. Electric pumps could stop working, so there may no longer be water coming out of taps. The internet could stop working where routers require power from the grid.
Furthermore, the heat could cause asphalt and tarmac to melt and rail tracks to buckle, while airports could be closed, not only because the surface of the runway could get too hot, but also because the air could become too thin for planes to take off due to the heat.
In short, traffic, transport and industrial activities such as smelting, which are emitting a lot of sulfates as well at the moment, could grind to a halt at many places on the Northern Hemisphere. The result would be a large reduction in aerosols that are currently masking the full wrath of global warming (mainly sulfates).
How much difference could it make? The IPCC in AR6 estimates the aerosol ERF to be −1.3 W m⁻², adding that there has been an increase in the estimated magnitude of the total aerosol ERF relative to AR5. In AR6, the IPCC estimate for liquid water path (LWP, i.e., the vertically integrated cloud water) adjustment is 0.2 W m⁻², but a recent analysis found a forcing from LWP adjustment of −0.76 W m⁻², which would mean that the IPCC estimate of −1.3 W m⁻² should be changed to -2.26 W m⁻². When using a sensitivity of ¾°C per W m⁻², this translates into an impact of -1.695°C. Since the IPCC's total for aerosols includes a net positive impact for warming aerosols such as black carbon, the impact of cooling aerosols only (without warming aerosols) will be even more negative.
This supports the 2016 analysis that warned that by 2026 there could be a 1.9°C temperature rise due to a decrease in cooling aerosols, while there could be an additional 0.6°C temperature rise due to an increase in warming aerosols and gases as a result of more biomass and waste burning and forest fires by 2026.
So, together with the upcoming El Niño and a peak in sunspots, that could result in a total rise by 2026 of 5.44°C above pre-industrial. There's more to come! Additionally, the 2016 analysis warned about further rises in temperature due to loss of Arctic sea ice and permafrost, and associated changes, as well as further rises due to gases, concluding that there could be a temperature rise by 2026 of more than 10°C compared to pre-industrial.
With a temperature rise of more than 10°C by 2026, the clouds tipping point will also be crossed, which would result in a total rise of more than 18°C by 2026. Keep in mind that humans are likely to go extinct with a rise of 3°C, as illustrated by the image below, from an analysis discussed in an earlier post.

• What the IPCC impacts report is hiding
https://arctic-news.blogspot.com/2022/02/what-the-ipcc-impacts-report-is-hiding.html

• The Importance of Methane in Climate Change
https://arctic-news.blogspot.com/p/the-importance-of-methane-in-climate.html