What the IPCC impacts report is hiding

Above image is adapted from content by IPCC AR6 WGII and Peter Carter, expert IPCC reviewer and director of the Climate Emergency Institute.
The IPCC keeps hiding how much the temperature could already have risen and could rise over the next few years, the associated dangers, and the policies that could most effectively improve the situation. 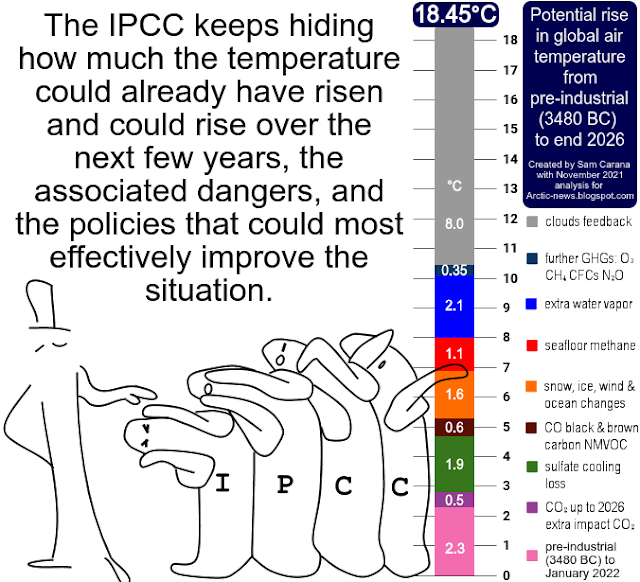 1. Hiding the potential rise that has already unfolded
One of the first issues that springs to mind is the IPCC's use of 1850-1900 as a baseline, which isn't pre-industrial as the Paris Agreement called for. 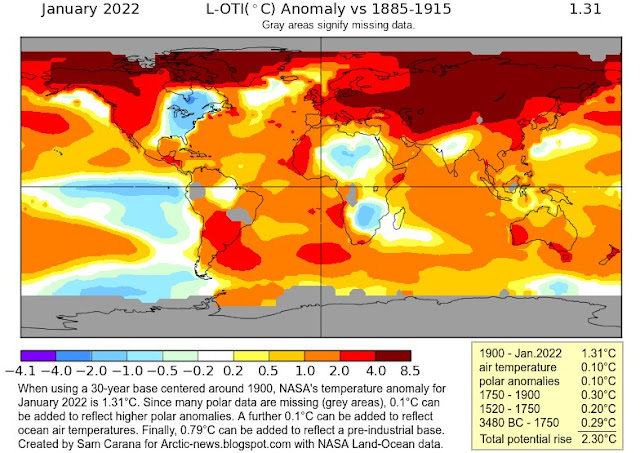 In other words, an even larger temperature rise threatens to unfold soon, i.e. this could happen over the course of at few years, as illustrated by the stacked bar next to the cartoon above and as discussed at the extinction page.
3. Hiding the largest dangers
The rise that has already unfolded, i.e. the rise from pre-industrial to 2020, could be as much as 2.3°C, as discussed above and at the pre-industrial page. Furthermore, the temperature rise is accelerating. In other words, Earth is already in the danger zone and the question remains what the implications are of a 3°C, 4°C and 5°C rise. 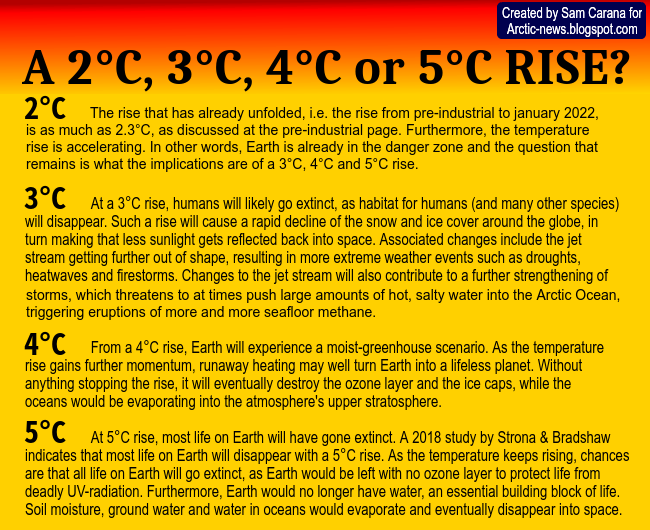 At a 3°C rise, humans will likely go extinct, as habitat for humans (and many other species) will disappear. Such a rise will cause a rapid decline of the snow and ice cover around the globe, in turn making that less sunlight gets reflected back into space. Associated changes are discussed in more detail at this page and this page, and include that the jet stream will further get out of shape, resulting in more extreme weather events such as droughts, heatwaves and firestorms. Changes to the jet stream will also contribute to a further strengthening of storms, which threatens to at times push large amounts of hot, salty water into the Arctic Ocean, triggering eruptions of more and more seafloor methane, as discussed in an earlier post.

From a 4°C rise, Earth will experience a moist-greenhouse scenario. As the temperature rise gains further momentum, runaway heating may well turn Earth into a lifeless planet, a danger that was discussed in this 2013 post, warning that, without anything stopping the rise, it will continue to eventually destroy the ozone layer and the ice caps, while the oceans would be evaporating into the atmosphere's upper stratosphere and eventually disappear into space.

At 5°C rise, most life on Earth will have gone extinct. A 2018 study by Strona & Bradshaw indicates that most life on Earth will disappear with a 5°C rise (see box on the right). As the temperature keeps rising, chances are that all life on Earth will go extinct, as Earth would be left with no ozone layer to protect life from deadly UV-radiation. Furthermore, Earth would no longer have water, an essential building block of life. Soil moisture, groundwater and water in oceans would evaporate and eventually disappear into space, as discussed in an earlier post.

Much of the above was discussed earlier at Most Important Message Ever.

A rise of more than 5°C could happen within a decade, possibly by 2026. Humans will likely go extinct with a 3°C rise and most life on Earth will disappear with a 5°C rise. In the light of this, we should act with integrity.
4. Hiding the very policies that can most effectively improve the situation
The IPCC creates a perception that pollution can continue for decades to come. The IPCC does so by downplaying the size of the temperature rise and the threat of a huge rise within years. The IPCC promotes the idea that there was a “carbon budget” to be divided among polluters that would enable polluters to keep polluting for decades to come. Most importantly, the IPCC has once more failed to do what the Paris Agreement calls for, i.e. for the IPCC to specify the pathways that can best improve the situation, specifically the policies that are needed to facilitate a better future.
The speed at which a huge temperature rise can unfold makes that many adaption efforts could be wasted or even counter-productive. A 2021 report by Neta Crawford estimates the budgetary costs and future obligations of the post-9/11 wars at about $8 trillion in 2021 dollars. Much of that money was spent on securing the supply and transport of fossil fuel. Governments spend $1.8tn a year on subsidies that harm the environment, a study by Doug Koplow et al. finds. Globally, fossil fuel subsidies were $5.9 trillion in 2020 or about 6.8% of GDP and are expected to rise to 7.4% of GDP in 2025, a 2021 IMF report finds.

Perverse subsidies are even higher when also including money that now goes into constructing transport infrastructure such as roads, highways, tunnels, bridges, railways, airports, etc. Redirecting such funding could enable more people to work and study from home with time to spare and gardens to grow their own food, instead of commuting by car over roads to offices, schools, etc.
Electric VTOL air taxis can replace a huge part of the traffic that now demands expensive infrastructure such as roads, railways including service stations, parking buildings and strips, bridges, tunnels, etc. Air taxis can facilitate a dramatic reduction in the need for traffic infrastructure, which also includes space now used for garages and parking.
If much of this traffic instead takes place by air taxis, then urban design can have more space for outdoor dining, parks, markets, tree-lined footpaths, bike-tracks, etc.


Furthermore, drones could be used for transport and delivery of cargo, pharmaceuticals, etc. In many places, cities can become more compact and buildings can be put closer together, thus reducing overall cost and enabling people to reach destinations quicker, either by walking or cycling. Air taxis can bring people to many destinations fast, while people can also using online facilities to further reduce the need for transport and travel infrastructure.


In other places, the space now used for roads and parking could instead be used to create urban forests, to extend gardens and to create community gardens and markets where people can get locally-produced vegan-organic food such as fruit and vegetables.
Much additional infrastructure can also change, such as traffic lights and road signs, streetlights and the electricity grid. Supply of natural gas could be replaced by electric devices such as heat-pumps, induction-cookers and electric water-heaters. Organic waste can be pyrolysed with the resulting biochar added to the soil.
For more on the Urban Heat Island effect, see:
https://www.facebook.com/groups/airtaxis/posts/419568755612304


For more on biochar and pyrolysis, see:
https://www.facebook.com/groups/biochar

• Could Earth go the same way as Venus?
https://arctic-news.blogspot.com/p/could-earth-go-same-way-as-venus.html