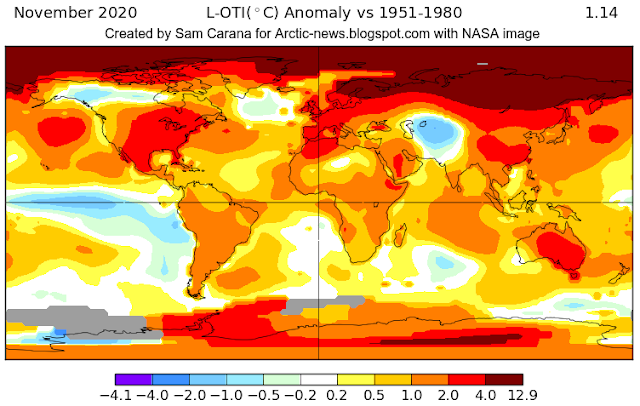 Using a different baseline can make a lot of difference. An earlier analysis pointed out that, when using a 1750 baseline and when using ocean air temperatures and higher Arctic anomalies, we did already cross  2°C above pre-industrial in February 2020. 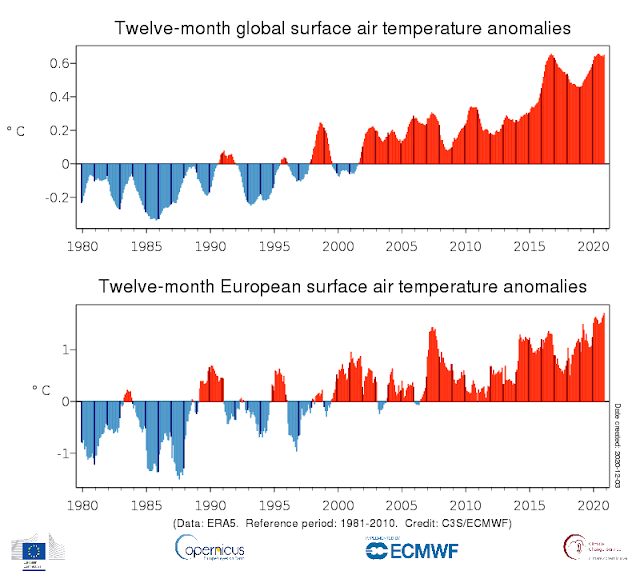 Above Copernicus image shows temperatures averaged over the twelve-month period from December 2019 to November 2020. The image shows that the shape of the global anomaly over the past twelve months is very similar to the peak reached around 2016. This confirms that global heating is accelerating, because the peak around 2016 was reached under strong El Niño conditions, whereas current temperatures are reached under La Niña conditions. Furthermore, sunspots are currently low. The La Niña and the low sunspots are both suppressing temperatures, as discussed in a recent post.
Future rise?

By how much will temperatures rise over the next few years?

Above image, from the U.N. Emissions Gap Report 2020, shows that growth in greenhouse gas emissions continued in 2019, with emissions reaching a total of 59.1 GtCO₂e. The commitments promised at the Paris Agreement in 2015 were not enough to limit the temperature rise to 1.5°C and those commentments were not even met, said António Guterres, United Nations Secretary-General, calling on all nations to declare a state of Climate Emergency until carbon neutrality is reached. Earlier, António Guterres had said: "We are headed for a thundering temperature rise of 3 to 5 degrees Celsius this century."
What could cause a steep temperature rise over the next few years?

A temperature rise of more than 3°C above pre-industrial could occur, and this could actually happen within a few years time. There are a number of reasons why the temperature rise could take place so fast, as described below.
As said, the temperature is currently suppressed by the current La Niña and the currently low sunspots (Hansen et al. give the sunpot cycle an amplitude of some 0.25 W/m²). Such short-term differences show up more in the red trend of the image at the top, which uses a polynomial trend over a short period.
Compensating for the fact that sunspots are currently low and the fact that we're currently a La Niña period can already push the temperature anomaly well over the 2°C threshold that politicians at the Paris Agreement pledged would not be crossed.

The above NOAA image and the NOAA image below illustrate that we are currently experiencing La Niña conditions. 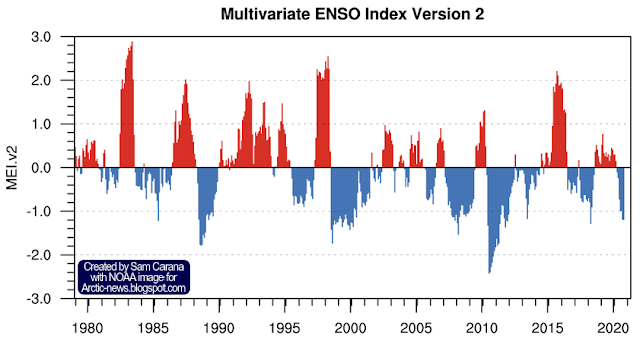 How long will it take before we'll reach the peak of the next El Niño? NOAA says:


El Niño and La Niña episodes typically last nine to 12 months, but some prolonged events may last for years. While their frequency can be quite irregular, El Niño and La Niña events occur on average every two to seven years. Typically, El Niño occurs more frequently than La Niña.

There are further reasons why the temperature rise could strongly accelerate over the next few years. Loss of cooling aerosols is one such reason. Another reason is the growing frequency and intensity of forest fires, which come with high emissions of methane, of heating aerosols such as black carbon and brown carbon, and of carbon monoxide that causes hydroxyl depletion, thus extending the lifetime of methane and heating aeosols.

A hotter world will will also hold more water vapor, a potent greenhouse gas.
Furthermore, many tipping points affect the Arctic, e.g. more methane and nitrous oxide emissions can be expected to result from continued decline of what once was permafrost.
The temperature rise is felt the strongest in the Arctic, as illustrated by the zonal mean temperature anomaly map on the right, from an earlier post.

When extending the vertical axis of the image at the top, a picture emerges that shows that a temperature rise of more than 13°C above 1750 could happen by 2026. The trend shows that 10°C is crossed in February 2026, while an additional rise of 3°C takes place in the course of 2026. The temperature could rise this much, in part because at 1200 ppm CO₂e the cloud feedback will start to kick in, which in itself can raise temperatures by an additional 8°C.

And the rise wouldn't stop there! Even when adding up the impact of only the existing carbon dioxide and methane levels, and then adding large releases of seafloor methane, this alone could suffice to trigger the cloud feedback, as described in an earlier post.
Of course, there are further warming elements, in addition to carbon dioxide and methane, and they could jointly cause a rise of 10°C by 2026 even in case of smaller releases of seafloor methane, as illustrated by the image below.

Above image illustrates how a temperature rise of more than as 10°C could eventuate as early as February 2026 when taking into account aerosol changes, albedo changes, water vapor, nitrous oxide, etc., as discussed in an earlier analysis.
The joint impact of all warming elements, including the cloud feedback, threatens to cause a total rise of 18°C, as an earlier post warned, adding the image on the right.
How high could the temperature rise? At a 3°C rise, humans will likely go extinct, while most life on Earth will disappear with a 5°C rise, and as the temperature keeps rising, oceans will evaporate and Earth will go the same way as Venus, a 2019 analysis warned.
The situation is dire and calls for immediate, comprehensive and effective action, as described in the Climate Plan.