Arctic sea ice increased rapidly in October 2015, after reaching its annual minimum in September. As the image below shows, the growing sea ice extent has effectively sealed off the Arctic Ocean from the atmosphere, resulting in less evaporation and heat transfer from the ocean to the atmosphere.

The Naval Research Laboratory 30-days animation (up to October 22, with forecast added up to October 30) on the right shows that sea ice has grown in extent, adding plenty of very thin sea ice, while the existing ice has hardly increased its thickness.

The Buffer Has Gone

Thick sea ice used to extend meters below the sea surface in the Arctic, where it could consume massive amounts of ocean heat through melting this ice into water. As such, thick sea ice acted as a buffer. Over the years, Arctic sea ice thickness has declined most dramatically. This means that the buffer that used to consume massive amounts of ocean heat carried by sea currents into the Arctic Ocean, has now largely gone.

Since it's freshwater that is now covering a large part of the surface of the North Atlantic, it will not easily sink in the very salty water that was already there. The water in the North Atlantic was very salty due to the high evaporation, which was in turn due to high temperatures and strong winds and currents. Freshwater tends to stay on top of more salty water, even though the temperature of the freshwater is low, which makes this water more dense. The result of this stratification is less evaporation in the North Atlantic, and less transfer of ocean heat to the atmosphere, and thus lower air temperatures than would have been the case without this colder surface water.
The cold lid over the North Atlantic has meanwhile expanded. Greenland has been experiencing wild weather swings this month, with temperatures shifting from one extreme end of the scale to the other end. The image below shows temperature anomalies on October 17 (left panel), October 23 (center panel) and a forecast for October 30 (right panel). Temperatures are forecast to swing back to the extreme high end of the scale, pushing up temperature anomalies for the Arctic as a whole to as high as 2.37°C on October 30, 2015.
These wild weather swings over Greenland threaten to cause cracks in the ice, with methane hydrates in the ice becoming destabilized, resulting in releases of huge amounts of methane from hydrates and free gas into the atmosphere, as earlier discussed as feedback #21 on the Feedbacks page.
Strong winds have further contributed to extend the cold lid over the North Atlantic, while also making cold air flow from Greenland over the North Atlantic. This is illustrated by the image below, depicting the situation on October 23, 2015, with the left panel showing surface wind speed, while the right panel shows the resulting sea surface temperature anomalies.

The video below shows surface wind speed forecasts in the Arctic from October 25 to November 1, 2015.

Of all the excess heat resulting from people's emissions, 93.4% goes into oceans. Accordingly, the temperature of oceans has risen substantially over the years and - without action - the situation only looks set to get worse.


The Threat
As ocean temperatures continue to rise, especially in the North Atlantic, the Gulf Stream will keep carrying ever warmer water from the North Atlantic into the Arctic Ocean. Without the buffer of thick sea ice to consume the increasing amount of ocean heat, the threat is that ocean heat will increasingly reach the seafloor and unleash huge methane eruptions from destabilizing clathrates. Such large methane eruptions will then warm the atmosphere at first in hotspots over the Arctic and eventually around the globe, while also causing huge temperature swings and extreme weather events, contributing to increasing depletion of fresh water and food supply, as further illustrated by the image below, from an earlier post. 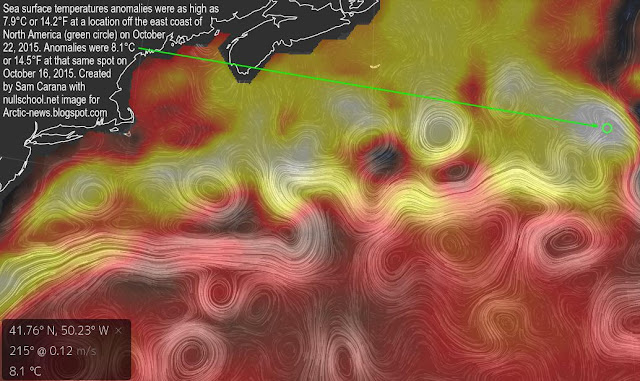 Sea surface temperature anomalies were as high as 7.5°C or 13.6°F at a location near Svalbard on October 25, 2015. On October 9, 2015, sea surface temperatures were as high as 13.1°C or 55.6°F at that same location near Svalbard (marked by green circle on image below), an anomaly of 9.5°C or 17.2°F. These temperatures indicate that the water can be much warmer below the surface than at the surface, and that this warm water is transported by the Gulf Stream below the surface of the North Atlantic into the Arctic Ocean. The animation below switches between the above two dates and also shows that the cold freshwater lid on the North Atlantic has meanwhile extended further south. 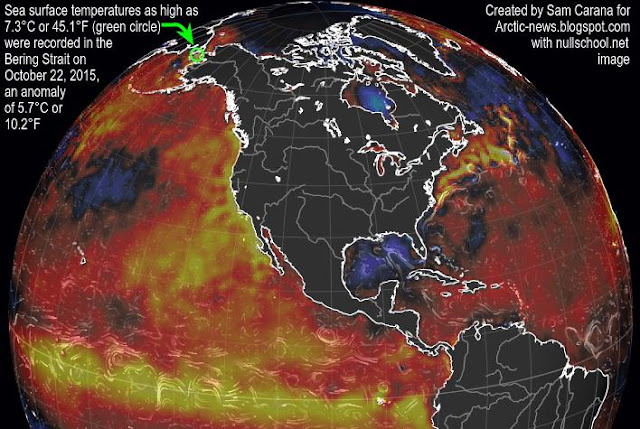 The images below show high methane concentrations over the Arctic. 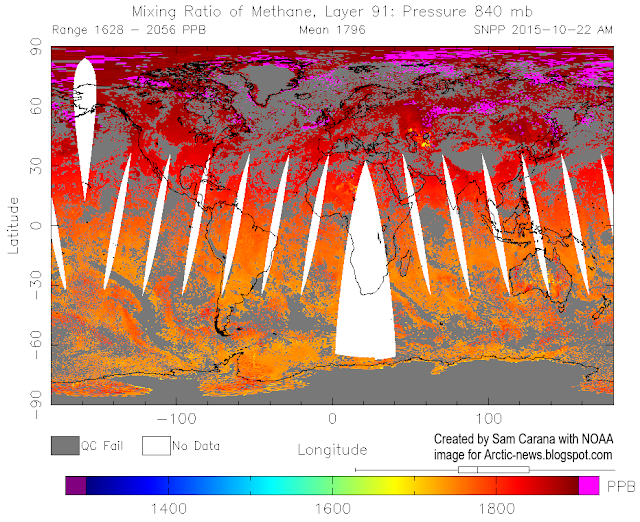 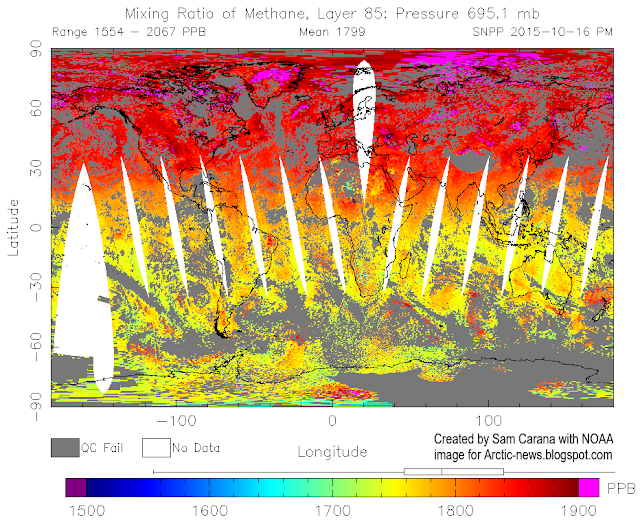 - The Mechanism leading to Collapse of Civilization and Runaway Global Warming
http://arctic-news.blogspot.com/p/the-mechanism.html