This analysis by Sam Carana of the temperature rise since pre-industrial shows that the 1.5°C threshold was already crossed at the time the Paris Agreement was reached in 2015 and that the 2°C threshold was crossed in February 2020. 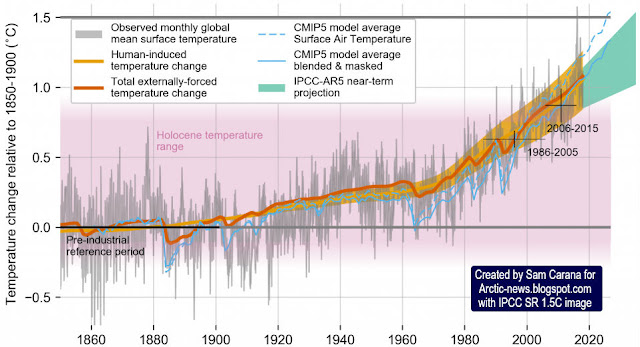 However, the Industrial Revolution is commonly agreed to have started in the year 1750.

Above image shows that the World Meteorological Organization (WMO) provides annual reports, in its Greenhouse Gas Bulletin, of greenhouse gas levels such as carbon dioxide and methane relative to year 1750. The IPCC Assessment Reports show human-caused radiative forcing by emissions and drivers relative to 1750, based on such figures. Similarly, the U.S. government uses 1750 as the year when the Industrial Revolution started and when humans started to warm the climate.

This analysis assesses how much the temperature would have risen when taking 1750 as baseline.

Adjusting data to a 1900 baseline

NASA data show that the temperature anomaly in February 2020 was 1.26°C above NASA's default 1951–1980 baseline. When using a different baseline, the data will need to be adjusted. It's good to avoid distortion due to short-term variability such as caused by volcanic activity, sunspots and El Niño events. A polynomial trend can smooth out such variability and a polynomial trend can additionally be a powerful tool to calculate how much adjustment is needed, as the images below show 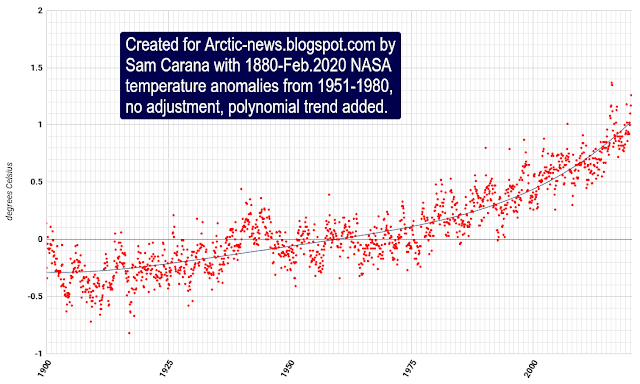 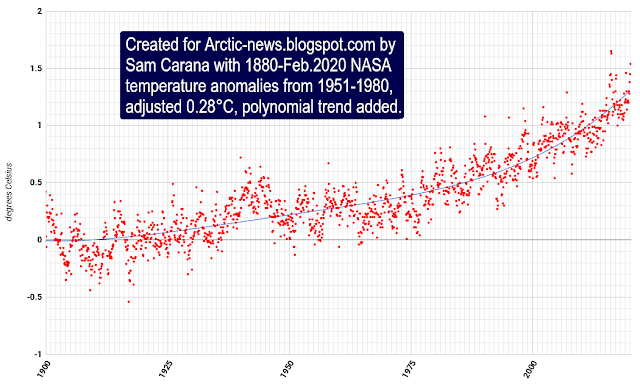 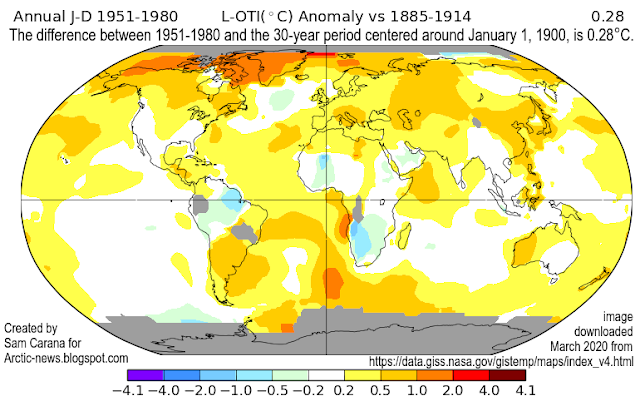 Adjusting data to a 1750 baseline

Further adjustment would be needed when using a 1750 baseline. As said, a polynomial trend can smooth out short-term variability, so it can indicate what the climate was around that time.

There are reasons to assume that the temperature may have risen even more than that.

As illustrated by above image, the NASA data for oceans are for sea-surface water temperatures.

Instead of using sea surface water temperatures, it makes sense to use air temperature above the water of the oceans.

Air temperatures over oceans are higher, as illustrated by the image on the right, from a 2019 study, which shows the difference between using surface air temperature globally (black line), versus when sea surface temperature are used for oceans (dark blue line) and in case of incomplete coverage (light blue line).

To assess the rise of Arctic temperatures over the years can be challenging. The temperature of the Arctic Ocean may have risen a lot over the years, but this rise may be missed when only taking measurements of the sea ice on top of the water. Areas covered by sea ice in the past may also have turned into open waters over the years. 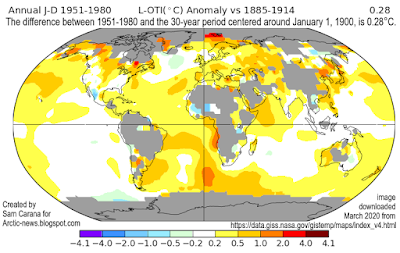 There may be little data available on how strong temperature rise was in the Arctic, especially when going back to 1750. 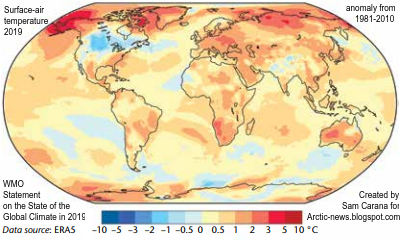 Temperatures have risen more in the Arctic than in the rest of the world, so it's important that especially Arctic temperatures are included in the global temperature rise.

For more on this, also see this 2019 study that concludes that missing data have been responsible for an underestimation of global warming by 0.1°C.

Furthermore, long-term and short-term temperature trends that are based on the NASA data and have been adjusted as described above, have crossed 2°C above pre-industrial, indicating that both the thresholds (1.5°C and 2°C) that politicians at the Paris Agreement pledged would not be crossed, have now been crossed.

Was the February 2020 perhaps a peak? Is there any indication that temperatures could soon come down to below the 2°C above pre-industrial threshold again? What if we dramatically cut carbon emissions?

Cutting carbon emissions may not stop temperatures from rising, as this 2011 article suggests. Moreover, there appears to be little political ambition to make dramatic cuts in emissions. Maximum warming occurs about one decade after a carbon dioxide emission, so the full warming wrath of the carbon dioxide emissions over the past ten years is still to come, as discussed at the extinction page. 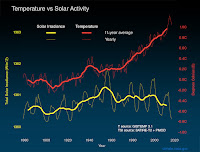 Short-term variations in solar irradiance show that we're currently in a minimum, as illustrated by the image on the right. The new SC25 sunspot cycle may start soon or may already have started, and could reach a peak in about 2024, according to a livescience article.

The February 2016 anomaly was a peak that occurred during an El Niño event. In February 2020, that was not the case, as conditions were El Niño neutral, according to NOOA (image right).

In other words, there is no reason to assume that the February 2020 anomaly was a peak caused by El Niño. Moreover, a strong El Niño could develop later in 2020 which could be the catalyst to trigger albedo changes and further feedbacks resulting in a huge temperature rise within years.

What about aerosols, more specifically, a decline in aerosols emitted by power plants, smelters and transport? It may well be that a decline in industrial activity contributed to the high February 2020 temperature anomaly and a huge further rise in temperature could result from the falling away of the aerosol masking effect, as discussed in an earlier post, and this rise looks set to increase.

Furthermore, as feedbacks start to kick in more strongly, a huge temperature rise could eventuate soon, as also discussed an earlier post.

In conclusion, rather than to expect that temperatures will soon come down below the 2°C above pre-industrial threshold again, the temperature rise looks set to continue, as discussed in a recent post.

• Most Important Message Ever
http://arctic-news.blogspot.com/2019/07/most-important-message-ever.html

• What would happen to the climate if we stopped emitting greenhouse gases today?
http://theconversation.com/what-would-happen-to-the-climate-if-we-stopped-emitting-greenhouse-gases-today-35011

• What Is the Sun's Role in Climate Change?
https://climate.nasa.gov/blog/2910/what-is-the-suns-role-in-climate-change/