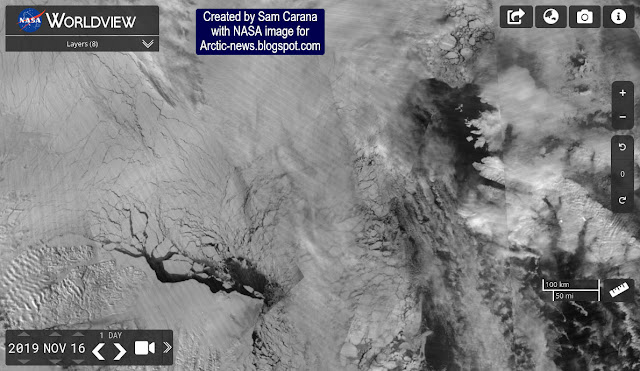 On November 16, 2019, there was little sea ice between Greenland and Svalbard. For reference, the image below has been added, showing coastlines for the same area. 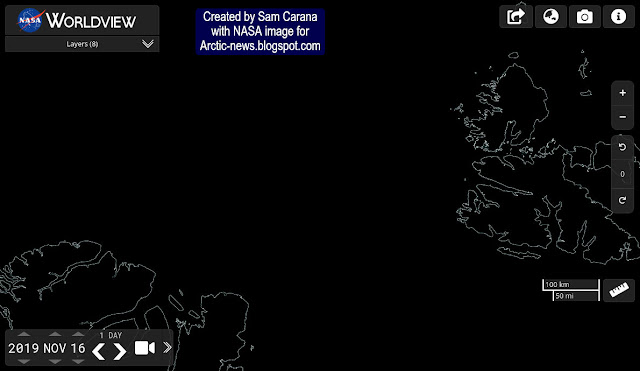 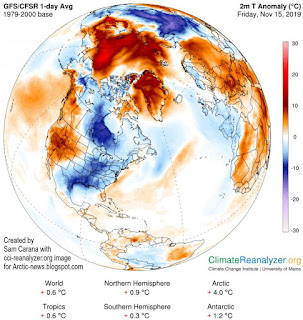 The image on the right shows that the average air temperature (2 m) on November 15, 2019, was 4°C higher over the Arctic than during 1979-2000.
Ocean heat is rising up from the Arctic Ocean, while a wavy jet stream enables cold air to leave the Arctic and descend over North America and Eurasia. On November 13, 2019, it was warmer in Alaska than in Alabama. 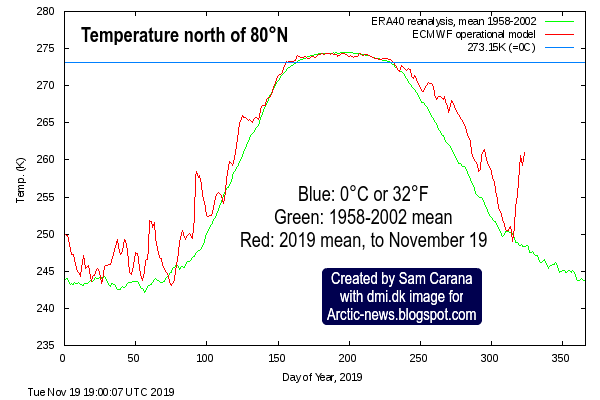 The image below shows that Arctic sea ice volume has been at record low levels for the time of year for some time. 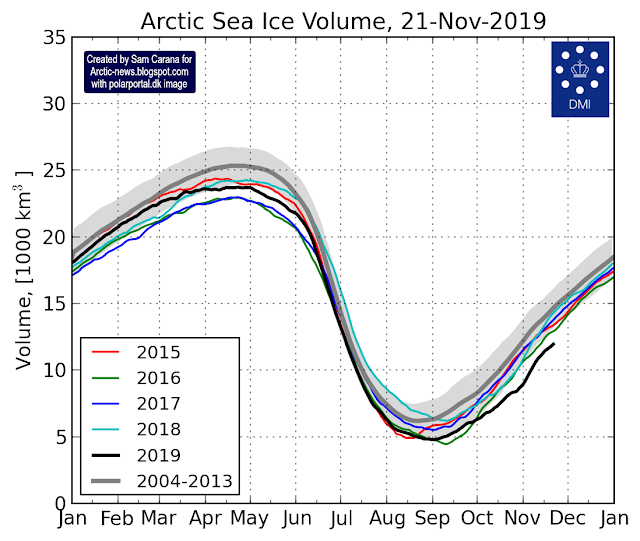 As the image below shows, Arctic sea ice extent in the Chukchi Sea is currently very low.

Oceans are absorbing more than 90% of global heating, as illustrated by the image below.

Arctic sea ice used to absorb 0.8% of global heating (in 1993 to 2003). Ocean heat keeps flowing into the Arctic Ocean, carried by ocean currents, as illustrated by the image below.


As peak heat arrives in the Arctic Ocean, it melts sea ice from below. In Summer 2019, a critical tipping point was crossed; ocean heat could no longer find further sea ice to melt, as the thick sea ice that hangs underneath the surface had disappeared. A thin layer of sea ice at the surface was all that remained, as air temperatures remained low enough to prevent it from melting from above.

The images above and below shows very high sea surface temperature anomalies on the Northern Hemisphere for October 2015 and October 2019. In both cases, anomalies of 1.09°C or 1.96°F above the 20th century average were recorded.

The danger is particularly high in October, as Arctic sea ice starts growing in extent at the end of September, thus sealing off the water, meaning that less ocean heat will be able to escape to the atmosphere. This increases the danger that hot water will reach sediments at the Arctic Ocean seafloor and trigger massive methane eruptions. 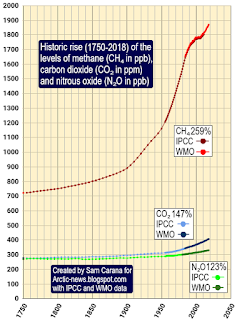 “There is no sign of a slowdown, let alone a decline, in greenhouse gases concentration in the atmosphere despite all the commitments under the Paris Agreement on Climate Change,” said WMO Secretary-General Petteri Taalas.

“It is worth recalling that the last time the Earth experienced a comparable concentration of CO2 was 3-5 million years ago. Back then, the temperature was 2-3°C warmer, sea level was 10-20 meters higher than now,” said Mr Taalas.

In the video below, Paul Beckwith discusses Arctic sea ice.

• It’s warmer in Alaska than in Alabama today
https://www.al.com/news/2019/11/its-warmer-in-alaska-than-in-alabama-today.html

• Where is global warming going? | by John Cook (2010)
https://skepticalscience.com/Where-is-global-warming-going.html

• IPCC Report Ocean and Cryosphere in a Changing Climate
https://arctic-news.blogspot.com/2019/09/ipcc-report-ocean-and-cryosphere-in-a-changing-climate.html