IPCC Report Ocean and Cryosphere in a Changing Climate

The IPCC has issued another special report: The Ocean and Cryosphere in a Changing Climate.

How much carbon is there in the Arctic?

How much carbon is present in the northern circumpolar permafrost region (map)?

According to the report, there is 1460 to 1600 billions of tons of carbon (GtC¹) present in the soil on land. The report also mentions that there is additional carbon present on shallow Arctic sea shelves, but the report doesn't add figures.

Natalia Shakhova et al. once estimated the accumulated methane potential for the Eastern Siberian Arctic Shelf alone to be about 500 Gt of organic carbon, with an additional amount in hydrates of about 1000 Gt and a further amount of methane in free gas of about 700 Gt. Back in 2008, Natalia Shakhova et al. considered release of up to 50 Gt of predicted amount of hydrate storage as highly possible for abrupt release at any time.

How much of these vast amounts could be released to the atmosphere?

The IPCC report projects permafrost near the surface (top 3–4 m) to decrease in area by up to 89% by 2100 under a high emissions scenario (RCP8.5), leading to cumulative release of tens to hundreds of billions of tons of carbon in the form of carbon dioxide and methane to the atmosphere by 2100.

The report fails to warn that, as the Arctic Ocean keeps heating up, huge seafloor methane eruptions could be triggered, and that this could happen within years, as discussed at the extinction page. Abrupt release of 10 Gt of methane would triple the amount of methane in the atmosphere, resulting in huge heating, while it would also trigger the clouds feedback tipping point to be crossed that in itself could push global temperatures up by 8°C within a few years, as earlier discussed in this post and this post.

The report notes that between 1979 and 2018, the areal proportion of multi-year Arctic sea ice at least five years old has declined by approximately 90%. The report refers to a study by Pistone that concludes that the additional heating due to complete Arctic sea ice loss would hasten global warming by an estimated 25 years. Below is a NASA video showing the melting away of the multi-year sea ice over the years.


The image below shows the difference in Arctic sea ice extent between the years, from an earlier post. 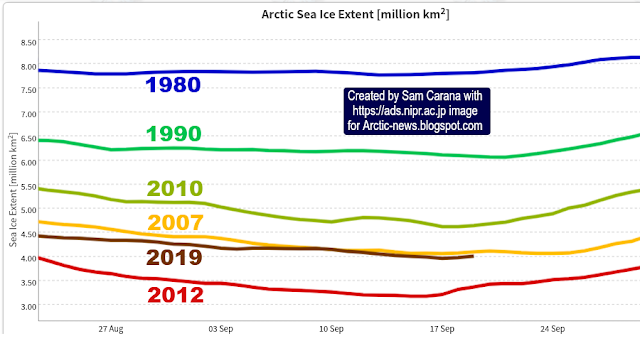 The image below shows how much global sea ice extent has decreased over the past few years.

Sea ice decline makes that less sunlight gets reflected back into space and more heat gets absorbed by the ocean. The report also mentions latent heat changes and increased water vapor and increased cloudiness over the Arctic Ocean. Furthermore, as the temperature difference between the North Pole and the Equator narrows, the Jet Stream changes, which makes it more likely that a large influx of hot, salty water can enter the Arctic Ocean. While the IPCC acknowledges that permafrost thaw could release large amount of greenhouse gases, it fails to warn people about the potential for a huge, abrupt temperature rise as a result of the combined impact of warming elements, such as the one illustrated by the image below. 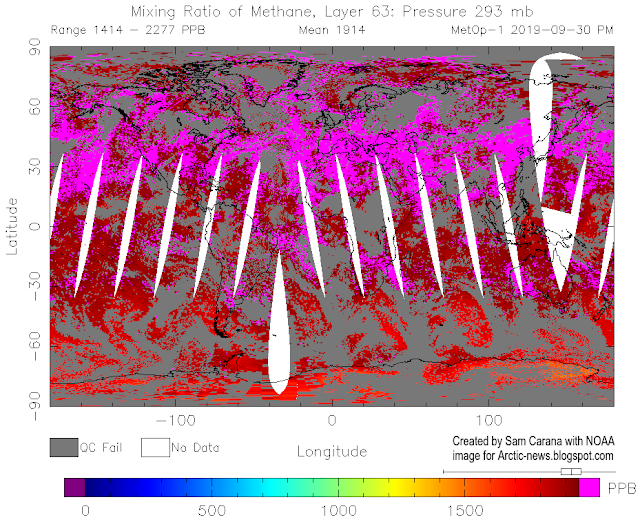 In the report launch press conference video below, IPCC authors respond to the question “May we have already passed the tipping point of abrupt and irreversible change and not knowing it yet?”

• IPCC special report, The Ocean and Cryosphere in a Changing Climate
https://www.ipcc.ch/srocc/home