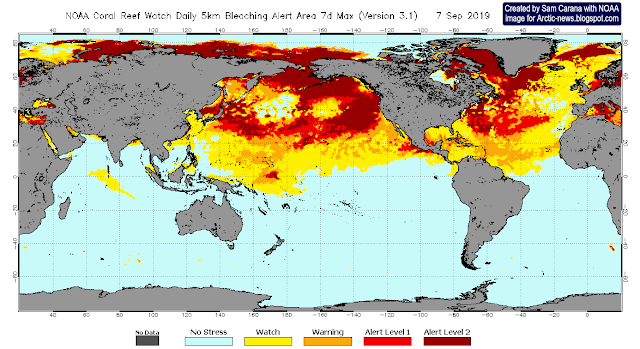 The Arctic Ocean is overheating, as illustrated by above image. 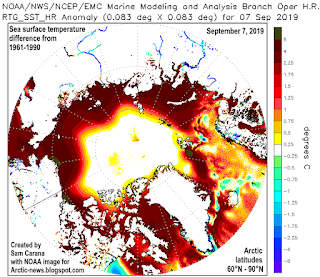 Heating of the water in the Arctic Ocean is accelerating, as illustrated by above map that uses 4-year smoothing and that shows temperatures in the Arctic that are up to 4.41°C hotter than the average global temperature during 1880-1920.

Where Arctic sea ice disappears, hot water emerges on the image, indicating that the temperature of the ocean underneath the sea ice is several degrees above freezing point. 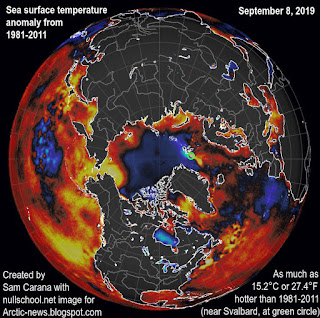 The nullschool.net image on the right shows sea surface temperature differences from 1981-2011 on the Northern Hemisphere on September 8, 2019, with anomalies reaching as high as 15.2°C or 27.4°F (near Svalbard, at the green circle).

Accelerating heating of the Arctic Ocean could make global temperatures skyrocket in a matter of years.

Decline of the sea ice comes with albedo changes and further feedbacks, such as the narrowing temperature difference between the North Pole and the Equator, which slows down the speed at which the jet stream circumnavigates Earth and makes the jet stream more wavy.

Disappearance of the sea ice also comes with loss of the buffer that has until now been consuming ocean heat as part of the melting process. As long as there is sea ice in the water, this sea ice will keep absorbing heat as it melts, so the temperature will not rise at the sea surface. The amount of energy absorbed by melting ice is as much as it takes to heat an equivalent mass of water from zero to 80°C. Once the sea ice is gone, further heat must go elsewhere.

The Naval Research Laboratory image on the right shows a forecast for Sep. 8, 2019, run on Sep. 7, 2019, of the thickness of the sea ice. Sea ice has become terribly thin, indicating that the heat buffer constituted by the sea ice has effectively gone. Only a very thin layer of sea ice remains in place throughout much of the Arctic Ocean.

This remaining sea ice is stopping a lot of ocean heat from getting transferred to the air, so the temperature of the water of the Arctic Ocean is now rising rapidly, with the danger that some of the accumulating ocean heat will reach sediments at the seafloor and cause eruptions of huge amounts of methane.

This situation comes at a time that methane levels are very high globally. Mean global methane levels were as high as 1911 parts per billion on the morning of September 3, 2019, a level recorded by the MetOp-1 satellite at 293 mb (image below). 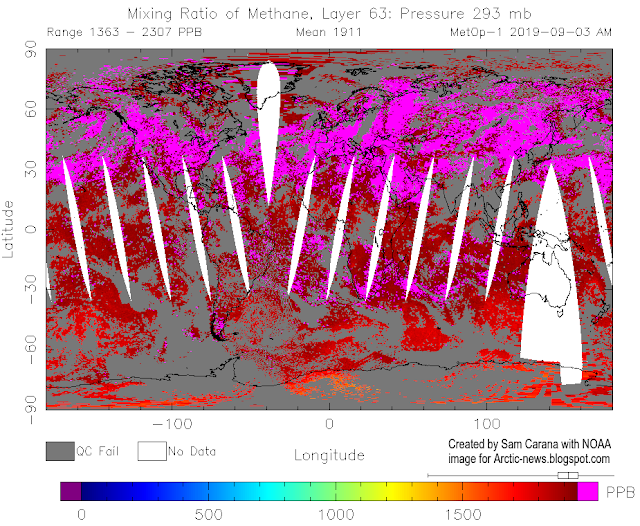 Compared to carbon dioxide, methane is some 150 times as potent as a greenhouse gas during the first few years after release.

Huge releases of seafloor methane alone could make marine stratus clouds disappear, as described in an earlier post, and this clouds feedback could cause a further 8°C global temperature rise.

In total, global heating by as much as 18°C could occur by the year 2026 due to a combination of elements, including albedo changes, loss of sulfate cooling, and methane released from the ocean seafloor.


In the image below, from an earlier post, a global warming potential (GWP) of 150 for methane is used. Just the existing carbon dioxide and methane, plus seafloor methane releases, would suffice to trigger the clouds feedback tipping point to be crossed that by itself could push up global temperatures by 8°C, within a few years time, adding up to a total rise of 18°C by 2026.

Progression of heating could unfold as pictured below.


In the video below, John Doyle describes out predicament.