The image also shows a red short-term trend, based on NASA LOTI 2012-Oct.2019 data, similarly adjusted and added to illustrate El Niño/La Niña variability and how El Niño could be the catalyst to trigger huge methane releases from the Arctic Ocean seafloor starting in 2020 and resulting in an 18°C (or 32.4°F) temperature rise within a few years time.

To put such a temperature rise in perspective, humans will likely go extinct with a 3°C rise, while most if not all life on Earth will go extinct at 5°C rise, as discussed in an earlier post.

The image below, from a recent study, indicates that El Niño is likely to come in 2020.

An international team of scientists are forecasting an El Niño for 2020. "The probability of 'El Niño' coming in 2020 is around 80%", says Hans Joachim Schellnhuber, Director Emeritus of the Potsdam Institute for Climate Impact Research. 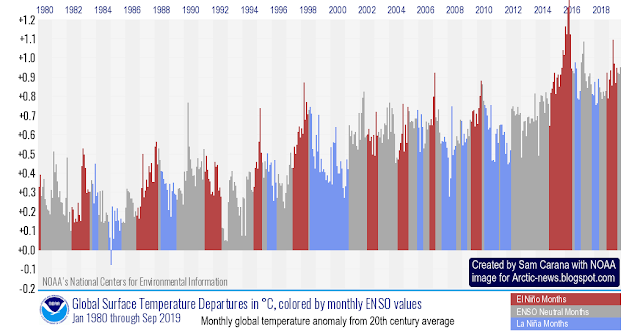 A recent study found that El Niño‐Southern Oscillation (ENSO) variability over the last five decades is ~25% stronger than during the preindustrial.

As the NASA map below shows, heating in October 2019 was particularly pronounced over the Arctic Ocean. 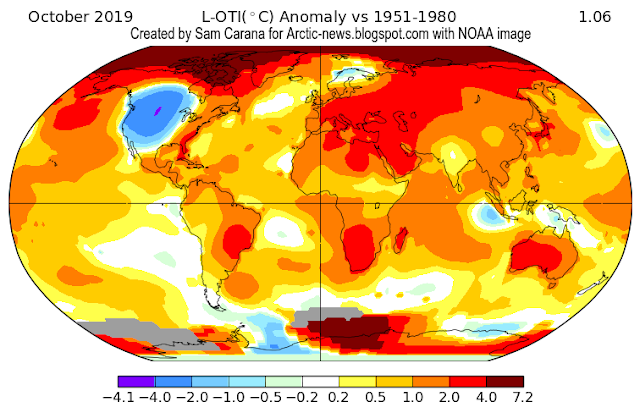 Note that the above NASA map shows anomalies from a 1951-1980 baseline.

As the image below shows, just the existing carbon dioxide and methane, plus seafloor methane releases, would suffice to trigger the clouds feedback tipping point to be crossed that by itself could push up global temperatures by 8°C, within a few years.

As described in this post and in an earlier post, a rapid temperature rise could result from a combination of elements, including albedo changes, loss of sulfate cooling, and methane released from destabilizing hydrates contained in sediments at the seafloor of oceans.