High methane concentrations (2351 ppb at 19,819 ft altitude) are recorded on February 21, 2014. Analysis shows that these concentrations are the result of massive methane eruptions from the seafloor of the Arctic Ocean.

Much of the methane showing up over Asia on the main image does not show up at altitudes where 2300+ ppb levels were recorded that day, indicating that these high readings were indeed caused by releases from the seafloor of the Arctic Ocean.

The Naval Research Laboratory image below shows the sea ice thickness as at February 21st, 2014.

On the other hand, the sea ice is not much thinner at the Laptev Sea, compared to areas closer to the North Pole, so the methane may well have originated from the Laptev Sea, which could indicate further destabilization of methane hydrates in the area, which is very worrying given the large quantities of methane estimated to be contained in sediments there in the form of free gas and hydrates. In addition, the Laptev Sea is very shallow, resulting in much of the releases from the seafloor there entering the atmosphere without getting decomposed by microbes in the water.

The situation may be even worse than this, as no methane data have shown up for the past few days at the NOAA website. We'll keep monitoring the situation and add updates later. 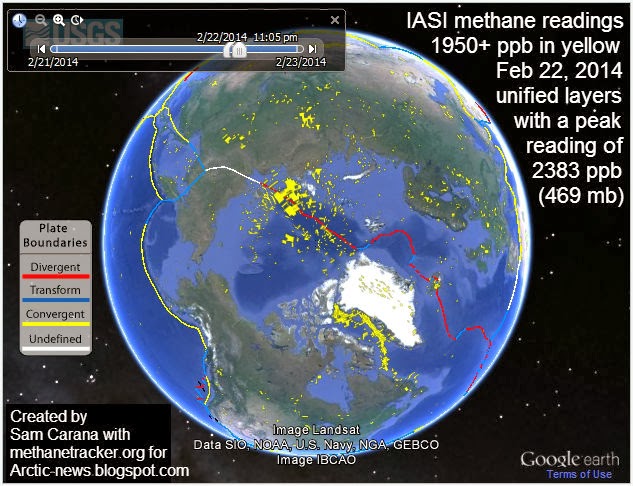 Above image shows that the highest concentrations have moved somewhat closer to the North Pole along the faultline crossing the Arctic Ocean. Also, very high methane concentrations are showing up again over Baffin Bay.

This supports this post's earlier conclusion, i.e. that methane hydrate destabilization is taking place closer to the North Pole and that the methane enters the atmosphere where the sea ice is sufficiently thin or fractured to allow the methane to pass through.

The image below shows what appears to have set off this destablization, i.e. an earthquake with a magnitude of 5 on the Richter Scale in the Greenland Sea on February 20th, 2014.

The image below shows the massive methane eruptions from the seafloor of the Arctic Ocean over February 21st and 22nd. 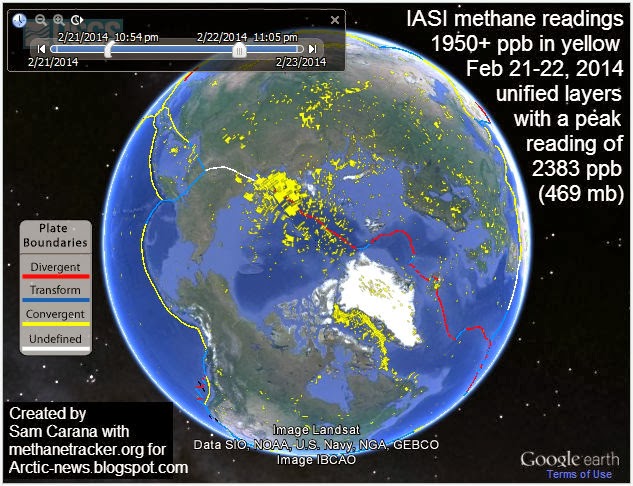 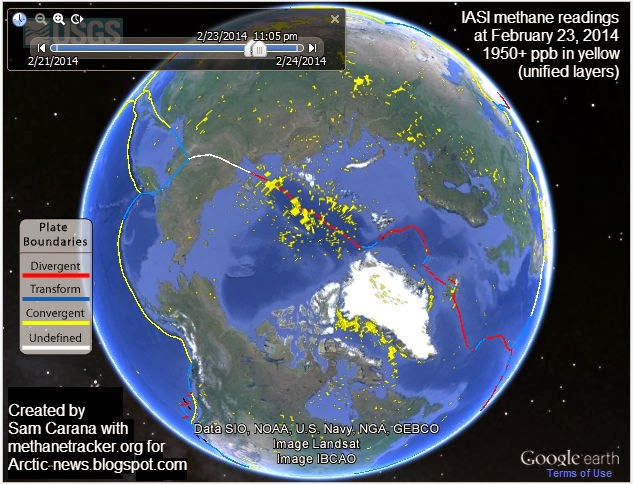 The image indicates that methane is being released over a large distance along the faultline crossing the Arctic Ocean. Note that the image only shows the methane that has entered the atmosphere, not the methane underneath the sea ice. Much methane may also have been released closer to Greenland along the faultline, but couldn't penetrate the sea ice at the location where it was released and therefore moved inderneath the sea ice with currents along the edges of Greenland, to enter the atmosphere where the sea ice was sufficiently thin or fractured in Baffin Bay, as well as in Hudson Bay and also along the east coast of Greenland (opposite Iceland).

The image below shows the combined methane concentrations for February 21-23, 2014, with peak readings added for each day.

Note that, compared to the above image, the top image at "The Biggest Story of 2013" shows more methane and also shows a higher peak (2399 ppb on December 29th, 2013). So, the situation may look less threatening now, but the story remains the same, with further indications that much of the methane showing up over Baffin Bay, over Hudson Bay, and over Fram Strait (all the way down to the southern tip of Greenland) may actually originate from areas along the Gakkel Ridge fault line. The releases that started in full back in early October 2013 are still continuing, and the situation again indicates that large releases can be triggered by earthquakes.

What may have saved the day is a sudden drop in sea surface temperature anomalies along the faultline that crosses the Arctic Ocean, as illustrated by the Climate Reanalyzer image below that compares the situation on February 18 (left) with the situation on February 24 (right). The image also shows the huge sea surface temperature anomalies off the east coast of North America. Much of this warm water will be carried along with the Gulf Stream and reach the Arctic Ocean later this year.

Also note that very low temperature are forecast for February 27th all along the east coast of North America. As the image below shows, people in some parts of Greenland may enjoy the same temperatures as people in the deep south of the United States on Febuary 27th, 2014. 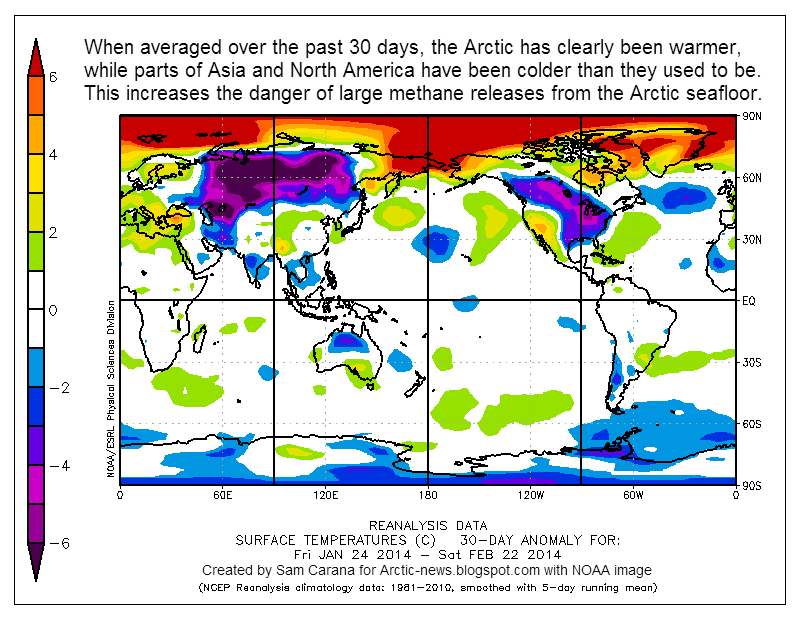 As illustrated by above image, the weather is getting more extreme and there is a clear pattern, i.e. the Arctic has been warmer than it used to be and temperatures in the Arctic are rising several times faster than global temperatures. This decreases the temperature difference beteen the areas to the north and to the south of the Jet Stream, which in turn decreases the speed at which the Jet Stream circumnavigates the globe, resulting in the Jet Stream becoming more wavier and increasing opportunities for cold air to descend from the Arctic and for warm air to enter the Arctic. In short, the situation in the Arctic is getting worse, increasing the danger of large methane releases from the Arctic seafloor. This spells bad news for the future and calls for comprehensive and effective action as discussed at the Climate Plan blog.