High methane levels over the Arctic Ocean on February 17, 2014 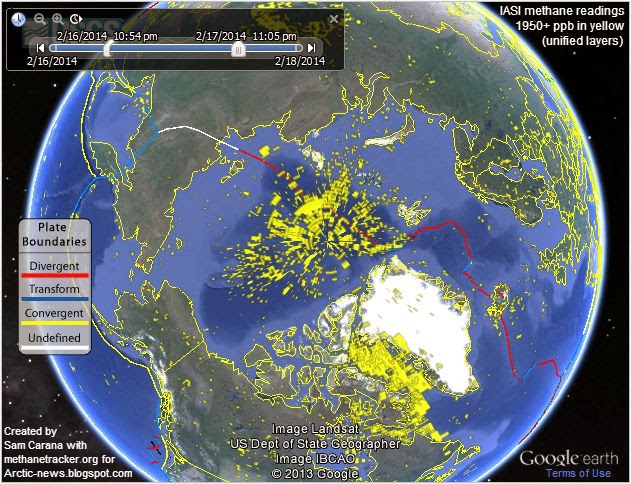 Above image shows IASI methane readings over the last day or so, when levels as high as 2223 ppb were recorded.

Where does the methane come from?

On above image, methane shows up prominently along the faultline that crosses the Arctic Ocean from the northern tip of Greenland to the Laptev Sea. This indicates that the methane originated from the depths of the Arctic Ocean, where sediments contain large amounts of methane in the form of free gas and hydrates, which have become destabilized.

Below is a comparison of methane readings for the week from February 9 to 16, 2014, compared to the same period in 2013.


The above comparison shows that there is a lot of methane over the Arctic Ocean that wasn't there last year.
Furthermore, high methane readings show up where currents move the sea ice out of the Arctic Ocean, in areas such as Baffin Bay. This indicates that methane that is released from the seafloor of the Arctic Ocean appears to be moving underneath the ice along with exit currents and entering the atmosphere where the sea ice is fractured or thin enough to allow the methane to pass through.
Also note that more orange areas show up on the southern hemisphere in 2014, indicating that more methane from the northern hemisphere is now spreading south beyond the equator. This in addition to indications that more methane is rising and building up at higher altitudes, as discussed in an earlier post.

What made these high releases from the seafloor of the Arctic Ocean persist for so long? At this time of year, one might have thought that the water in the Arctic Ocean would be much colder than it was, say, on October 1, 2013. 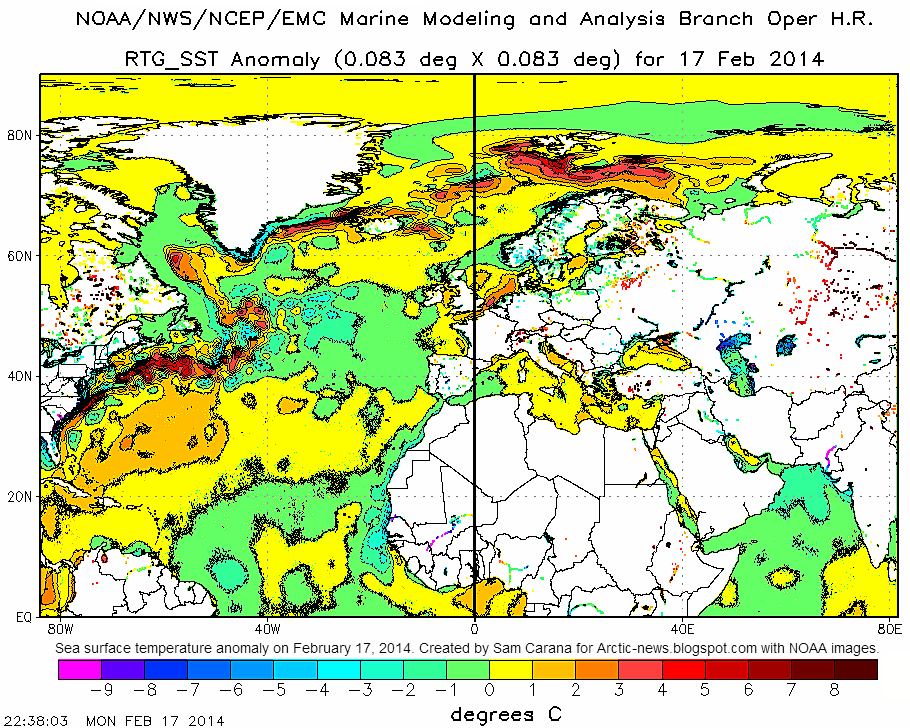 The situation looks even more grim on the Climate Reanalyzer image below, showing sea surface temperature anomalies that are far more profound in the Arctic Ocean. 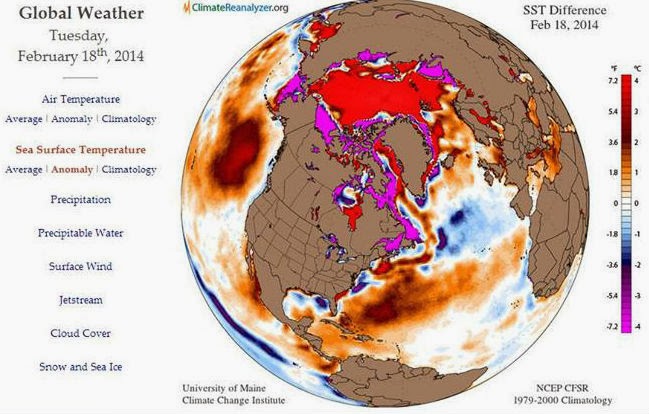 Note also that, as the sea ice extent increased, there have been less opportunities for the heat to evaporate on the surface and for heat to be transferred from the Arctic Ocean to the air.

Finally, what matters a lot is salinity. The combination image below compares salinity levels between October 1, 2013 (left), and February 17, 2014 (right).

Higher salinity levels are showing up closer to the faultline that runs through the Arctic Ocean from the top of Greenland to the Laptev Sea.

Importantly, these are not one-off releases, such as could be the case when hydrates get destabilized by an earthquake. As the Arctic-news blog has documented, high releases from the seafloor of the Arctic Ocean have been showing up persistently since early October 2013, i.e. 4½ months ago. This blog has warned about the threat for years. This blog has also described in detail the mechanisms that are causing these releases and the unfolding climate catastrophe that looks set to become more devastating every year. The poster below illustrates the danger. 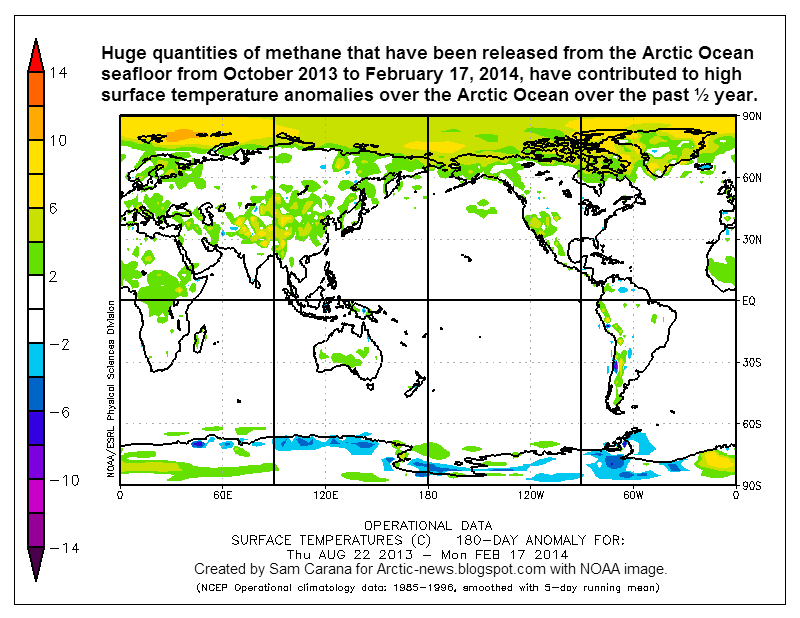 Methane released from the Arctic Ocean seafloor has contributed to high surface temperature anomalies over the Arctic Ocean in a number of ways. As a potent greenhouse gas, methane is trapping heat that would otherwise radiate into space. Furthermore, methane rising through the sea ice reduces growth of the sea ice.

The danger is that methane will further warm up the air over the Arctic, causing further weakening of the Jet Stream and further extreme weather events, particularly extreme warming of water all the way along the path of the Gulf Stream from the Atlantic Ocean into the Arctic Ocean, in turn triggering further releases from hydrates at the seafloor of the Arctic Ocean and escalating into runaway global warming. This threat calls for comprehensive and effective action, such as described at the ClimatePlan blog.