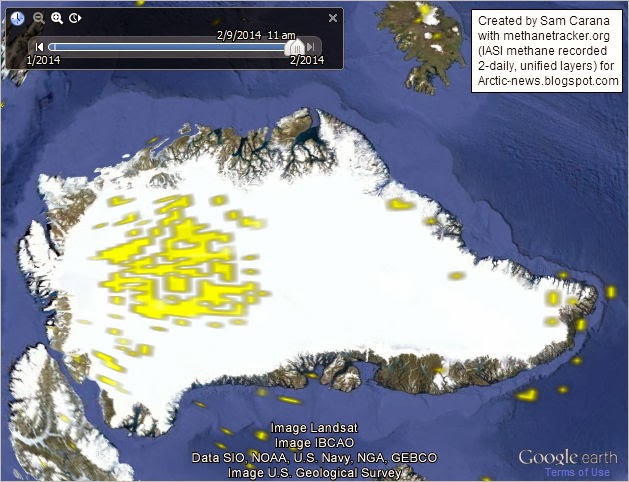 The animation below shows that high methane readings (1950+ ppb in yellow) have been showing up over Greenland since the start of February 2014.

What could have caused these high methane readings? The persistence with which the methane shows up over Greenland indicates that it did indeed originate from Greenland.

The above animation also illustrates that high methane readings show up every other image. The IASI readings come from a satellite that is orbiting the poles twice daily, with a 12-hour interval, so the satellite passes the North Pole twice every day. This makes that the images follow a day-versus night pattern, indicating that the high methane readings follow a circadian rhythm, suggesting a pattern that is in line with temperature differences between day and night.

As discussed in earlier posts such as this one, the once-common temperature difference between the Arctic and lower latitudes has been shattered, and this is weakening the Jet Stream and the Polar Vortex, in turn making it easier for cold air to flow down to lower latitudes and for warmer air to enter the Arctic. As a result, temperatures over Greenland can go from one extreme to another and back, as illustrated by the image with selected cci-reanalyzer.org forecasts below.

This could explain the methane over Greenland. Methane is present in the Greenland ice sheet in the form of hydrates and free gas. These huge temperature swings are causing the ice to expand and contract, thus causing difference in pressure as well as temperature. The combined shock of wide pressure and temperature differences is causing movement and fractures in the ice allowing methane to rise to the surface and enter the atmosphere.

The image below puts things in perspective, comparing methane over Greenland with methane over the Arctic Ocean. 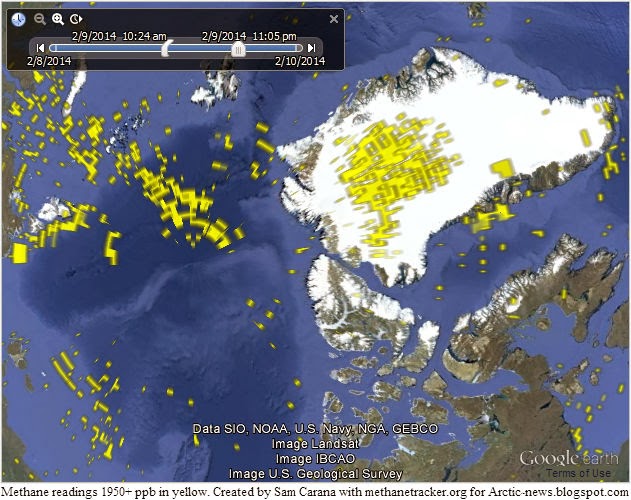 Above image shows that the amounts of methane over Greenland are huge, while methane is still being released from the seafloor of the Arctic Ocean, in particular along the faultline that runs from the north of Greenland to the Laptev Sea.

Few people seem to have anticipated these methane releases from the mountains of Greenland. Even worse, similar processes could be going at times on Antarctica, the Himalayas and the Qinghai-Tibet Plateau. I warned about this danger, e.g. in the May 2013 post Is Global Warming breaking up the Integrity of the Permafrost?. The danger that methane will be released in large (and growing) quantities from hydrates and free gas contained in the ice over mountains appears to have been ignored by the IPCC, which puts more weight on my estimate that methane release from hydrates currently amounts to 99 Tg annually, vastly more than the most recent IPCC estimates of 6 Tg per year.

Without action on climate change, these methane releases threaten to rise even further and cause runaway global warming. This calls for comprehensive and effective action as discussed at the Climate Plan blog.