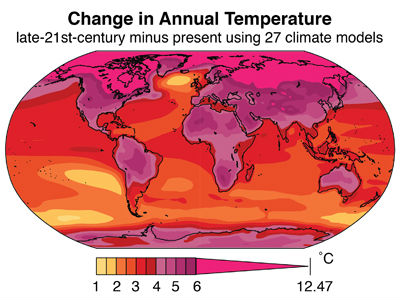 Earth is undergoing one of the largest climate changes in the past 65 million years, Stanford climate scientists Noah Diffenbaugh and Chris Field report, and it's on pace to occur at a rate 10 times faster than any change in that period.

“We know from past changes that ecosystems have responded to a few degrees of global temperature change over thousands of years,” said Diffenbaugh. “But the unprecedented trajectory that we're on now is forcing that change to occur over decades.”

Some of the strongest evidence for how the global climate system responds to high levels of carbon dioxide comes from paleoclimate studies. Fifty-five million years ago, carbon dioxide in the atmosphere was elevated to a level comparable to today. The Arctic Ocean did not have ice in the summer, and nearby land was warm enough to support alligators and palm trees. But apart from the rate of change, Diffenbaugh adds, another key difference is that “today there are multiple human stressors that were not present 55 million years ago, such as urbanization and air and water pollution.”

By the end of the century, should the current emissions of greenhouse gases remain unchecked, temperatures over the northern hemisphere will tip 5-6 degrees C warmer than today's averages. In this case, the hottest summer of the last 20 years becomes the new annual norm.

The situation looks to be even more dire than that, argues Sam Carana. In addition to carbon dioxide, there are further pollutants driving global warming. Moreover, as pictured below, feedbacks can dramatically accelerate the rise in temperature locally, particularly in the Arctic.


The level of methane in the atmosphere has already been rising even faster than the level of carbon dioxide, as illustrated by the image below. Moreover, there's the threat that large additional amounts of methane will suddenly be released, in particular from the Arctic seabed. 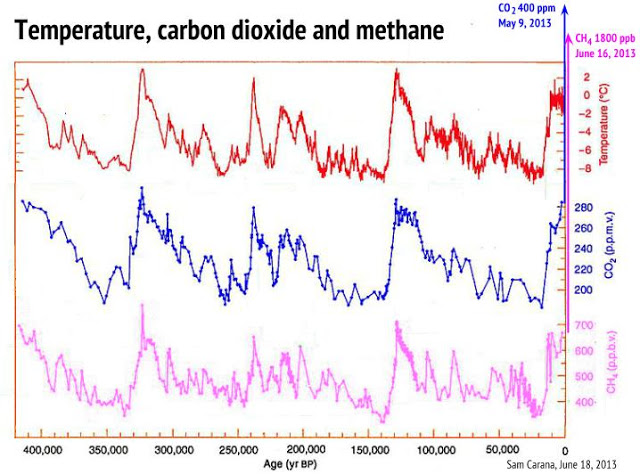 In August 2013, methane were recorded as high as 2349 ppb, as illustrated by the graph on below (added later, editor), showing that in early August, the world's mean methane level suddenly increased with at least 10 ppb compared to mean levels over the past few months. 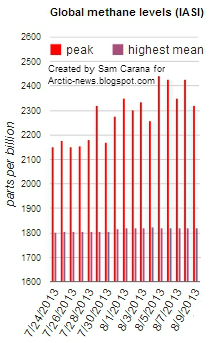 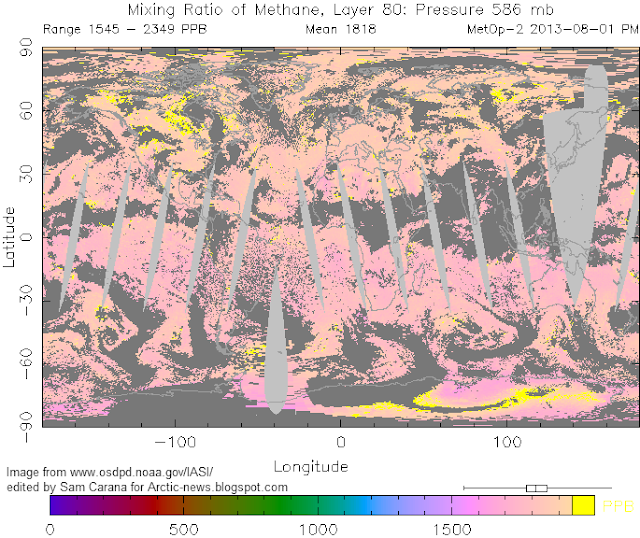 To get an idea just how much methane has entered the atmosphere, have a look at the image below, covering several days from the start of August 2013.

This is further illustrated by the two images below. The image directly below shows where the highest methane levels (i.e. over 1950 ppb, in yellow) were recorded on August 2, 2013.

The image below shows the presence of methane on August 2, 2013, for a number of ranges, including at levels over 1950 ppb (this time in red).

The methane threat is further described in the post Methane hydrates, which also features the image below.