The (updated) animation below shows SST anomalies from June 3 to August 26, 2013.

For a full-size animation, see http://www.ospo.noaa.gov/Products/ocean/sst/anomaly/anim_full.html

Locally, the situation can be even worse. The NOAA map below, dated August 13, 2013, shows that areas where the sea ice has disappeared in the Arctic Ocean can be exposed to sea surface temperature anomalies higher than 8°C (14.4°F). 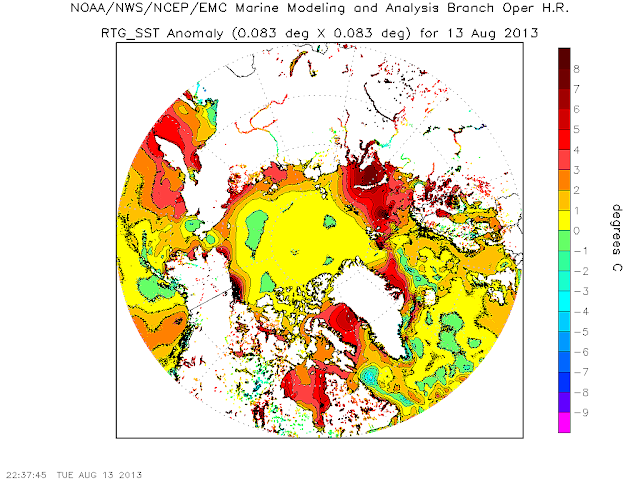 These anomalies are very high, even when compared to some of the recent years, when the decline of sea ice extent didn't look as bad as it appears now.

Many people may only look at the sea ice, assuming that things are fine as long as there is no dramatic decrease in sea ice area or extent (see Cryosphere Today image right).

However, there are many other things to consider, as described in the earlier post Cyclone raging over thin ice. Most importantly, sea surface temperature anomalies this high are very alarming!

For comparison, the image below shows August sea surface temperature anomalies in 2007, 2010 and 1011.

As the map below shows, a number of large rivers end in the Kara Sea, where high temperatures have been recorded for some time.

Another large river is the Mackenzie River, which ends in the Beaufort Sea, where sea surface temperatures of about 20°C (68°F) are currently recorded, as the image below illustrates. 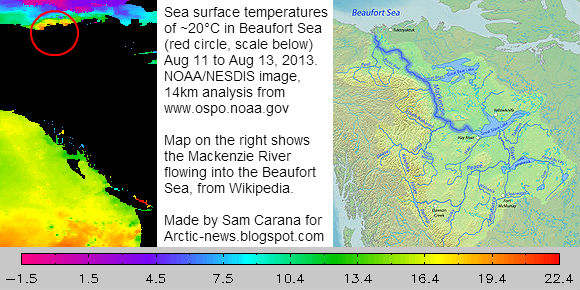 Similarly, the NOAA image below shows that sea surface temperatures of up to 18°C (64.4°F) were recorded in the Bering Strait on August 12, 2013. 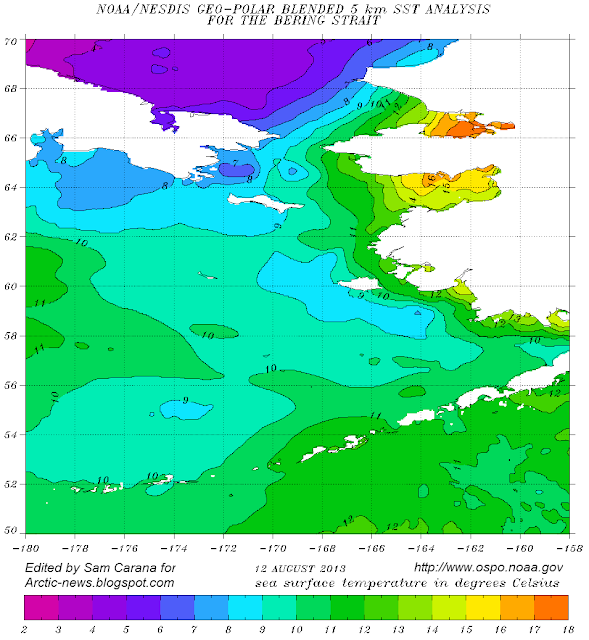 Note that the melting season still has quite a while to go. Arctic sea ice volume minimum is typically reached around halfway into September, which is more than one month away. On September 12-13, 2011, temperatures of 6-7°C were reached over East Siberian Arctic Shelf, and up to 9°C along the coast of Alaska.

The danger of this situation is that this dramatic rise in temperature anomalies will not remain restricted to surface waters, but that heat will penetrate the seabed which can contain huge amounts of methane in the form of hydrates and free gas in sediments.

At the moment, a cyclone is raging over the Arctic Ocean, and this causes warm surface waters to be mixed down, in many places all the way down to the seabed, due to the shallow nature of many of the seas in the Arctic Ocean.

As shown on the image right and also described at the FAQ page, there can be all kinds of fractures in the sediment, while there can also be conduits where methane has escaped earlier from hydrates, allowing heat to penetrate deep into the sediment and causing methane to escape.