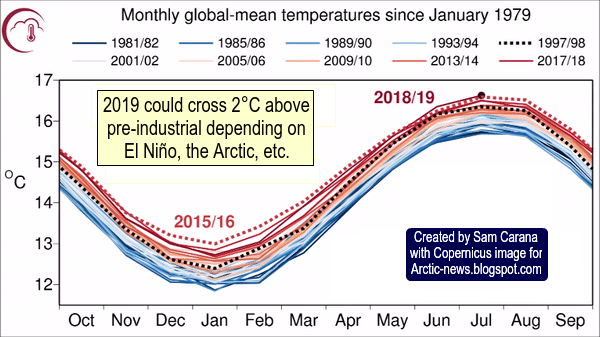 The July 2019 temperature was on a par with, and possibly marginally higher than, that of July 2016, according to a World Meteorological Organization (WMO) news release pointing an image by the Copernicus Climate Change Programme that is used as the background for above image. 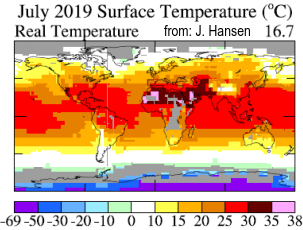 The July 2019 Surface Temperature was 16.7°C in real temperatures (as opposed to anomalies), as illustrated by the image on the right, supplied by James Hansen and constructed using Dr. Phil Jones climatology and GISS 250 km smoothing of anomalies.

The image also shows, James Hansen adds, that the monthly mean of the daily mean (not daily maximum) exceeded 35°C (95°F) in parts of North Africa and the Middle East. 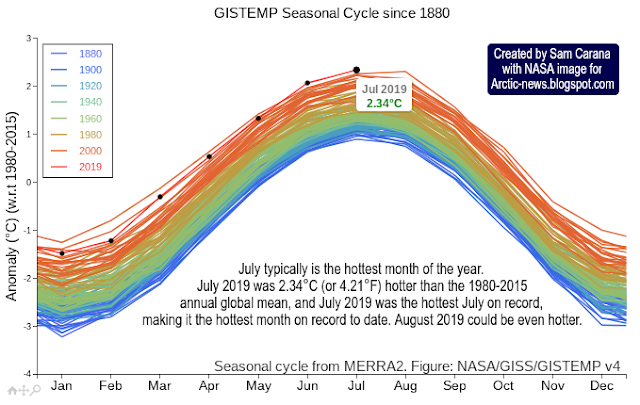 There's a spread of more than 3°C between the coldest and hottest monthly temperatures, in line with the seasonal cycle. Since the land/sea ratio is larger on the Northern Hemisphere and land heats up faster than oceans, July typically is the hottest month of the year, so the annual mean temperature for the year 2019 will be somewhat lower than the temperature for July 2019.

Two trends are added, based on the adjusted data, as described in an earlier analysis. The blue long-term trend is based on 1880-July 2019 data and points at a 3°C (or 5.4°F) rise by 2026. The red short-term trend is based on 2012-July 2019 data, to better illustrate El Niño/La Niña variability and the danger that large methane eruptions from the seafloor of the Arctic Ocean could result in near-term human extinction.

NASA's LOTI anomaly of 0.93°C above 1951-1980 for July 2019 becomes 1.71°C above pre-industrial when adjusted as described above. The trends also show that it could be 1.85°C above pre-industrial, in line with the earlier analysis that already pointed at a potential mean temperature for 2019 of 15.27°C, or 1.85°C above pre-industrial. Depending on what will happen in the Arctic and on further variables such as the strength of El Niño over the remainder of the year, 2019 could even cross the 2°C guardrail that politicians at the Paris Agreement pledged would not be crossed.

Above image shows the worrying rise of Northern Hemisphere sea surface temperature anomalies from the 20th century average, with the added trend illustrating the danger that this rise will lead to Arctic sea ice collapse and large methane eruptions from the seafloor of the Arctic Ocean, further accelerating the temperature rise. 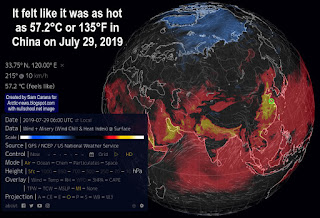 As temperatures keep rising, there are places on the northern hemisphere where the July heat is becoming ever harder to bear. 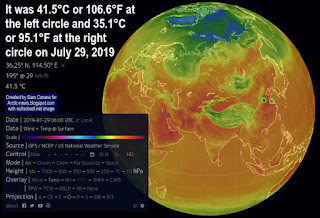 What made the weather so hard to bear was a combination of high temperature and high relative humidity, which was 81% in the area at the circle on the right at the time. 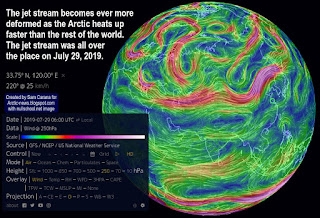 The jet stream is becoming ever more deformed as the Arctic heats up faster than the rest of the world. On July 29, 2019, the jet stream was all over the place, with a strong presence north of the circle, which made warm, moist air from the south move over China.

Since the Arctic continues to heat up faster than the rest of the world, such situations are likely to become more common. As noted in an earlier post, cyclones can increase humidity, making conditions worse. New research has meanwhile emerged pointing at the increasing risk associated with the combination of cyclones and heatwaves.

• July matched, and maybe broke, the record for the hottest month since analysis began
https://public.wmo.int/en/media/news/july-matched-and-maybe-broke-record-hottest-month-analysis-began