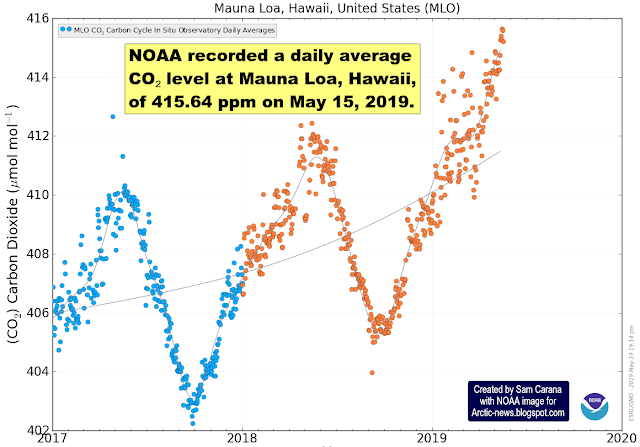 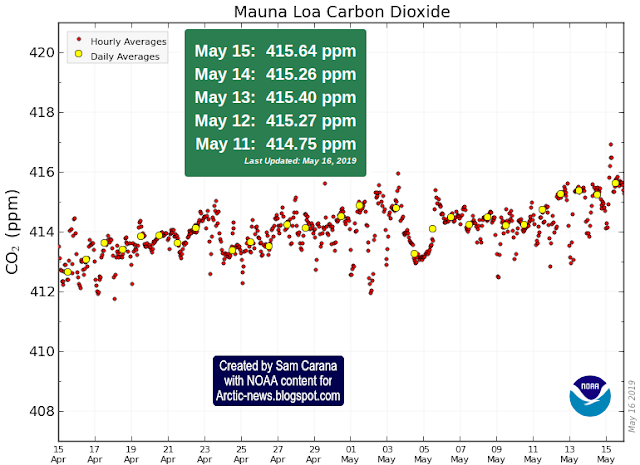 Current CO₂ levels far exceed levels that were common during the past 800,000 years, as the image below shows. CO₂ levels moved between roughly 180 and 280 ppm, while the temperature went up and down by some 10°C or 18°F. 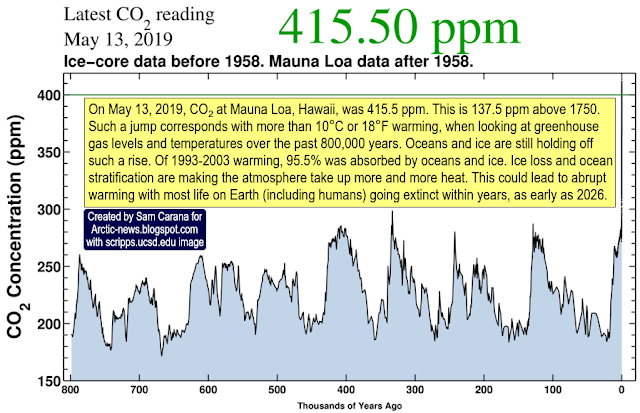 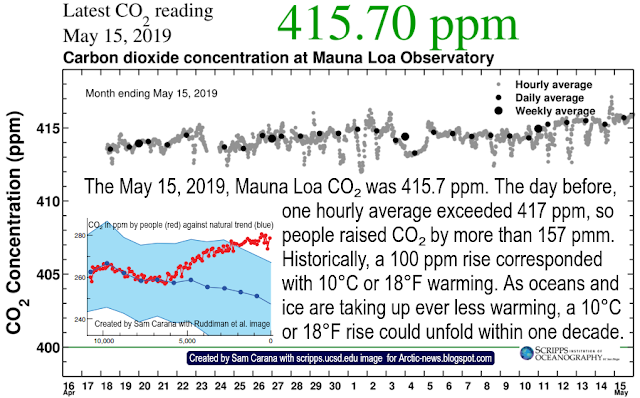 Given that a 100 ppm rise in CO₂ did historically cause temperatures to rise by 10°C or 18°F, how much warming would be in line with a 157 ppm CO₂ and how fast could such a rise unfold?

A temperature of 10°C or 18° above 1750 seems in line with such high greenhouse gas levels. This is illustrated by above graph, based on 420,000 years of ice core data from Vostok, Antarctica, and as the post What Does Abrupt Climate Change Look Like? describes.

Why isn't it much warmer now? Why hasn't such a rise happened yet? Oceans and ice are still holding off such a rise, by absorbing huge amounts of warming. Of 1993-2003 warming, 95.5% was absorbed by oceans and ice. However, ocean stratification and ice loss are making the atmosphere take up more and more heat.


There are further warming elements, in addition to the accelerating rise in greenhouse gas levels. Mentioned above is the loss of the snow and ice cover. The domino effect is a popular way to demonstrate a chain reaction. It is typically sequential and typically uses dominoes that are equal in size. A chain reaction can be achieved with solid dominoes each as much as 1.5 times larger than the previous one. The exponential function is discussed in the video below by Guy McPherson. Rather than following a linear order, warming elements can be self-reinforcing feedback loops and can influence each other in ways that multiply (rather than pass on) their impact, which can speed up the temperature rise exponentially.

So, how fast and by how much could temperatures rise? As oceans and ice are taking up ever less heat, rapid warming of the lower troposphere could occur very soon. When including the joint impact of all warming elements, as described in a recent post, abrupt climate change could result in a rise of as much as 18°C or 32.4°F by 2026. This could cause most life on Earth (including humans) to go extinct within years. 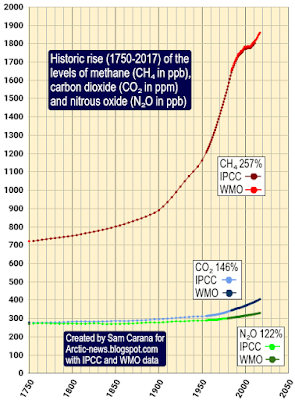 Next to carbon dioxide, there are further greenhouse gases. Methane is important, because of its high short-term potency as a greenhouse gas and because methane levels in the atmosphere have hugely risen since 1750, and especially recently, as illustrated by the image on the right.

A recent study by Turetsky et al. concludes that, since sudden collapse releases more carbon per square metre because it disrupts stockpiles deep in frozen layers, and since abrupt thawing releases more methane than gradual thawing does, the impact of thawing permafrost on Earth’s climate could be twice that expected from current models.

As said, there also is a huge and growing danger of large abrupt methane releases from clathrates contained in sediments at the seafloor of the Arctic Ocean.

As illustrated by the image below, methane levels are rising and this rise is accelerating. 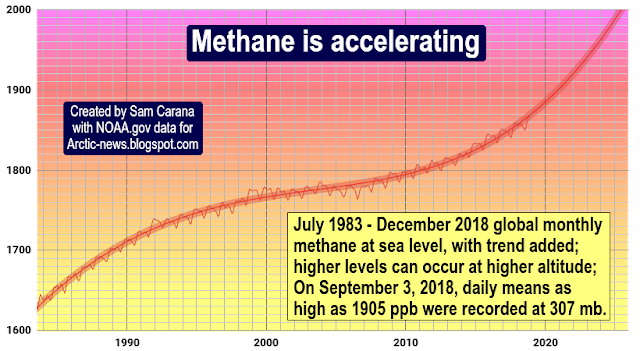 The graph shows July 1983 through December 2018 monthly global methane means at sea level, with added trend. Higher methane means can occur at higher altitude than at sea level. On Sep 3, 2018, daily methane means as high as 1905 ppb were recorded at 307 mb, an altitude at which some of the strongest growth in methane has occurred, as discussed in earlier posts such as this one.

The recent rise in methane is the more worrying in the light of recent research that calculates that methane's radiative forcing is about 25% higher than reported in IPCC AR5, implying that methane's GWP (global warming potential) over 10 years may be well over 150 times as much as CO₂.

In the video below, Paul Beckwith discusses nitrous oxide.


In the video below, Paul Beckwith discusses the recent study by Wilkerson et al. 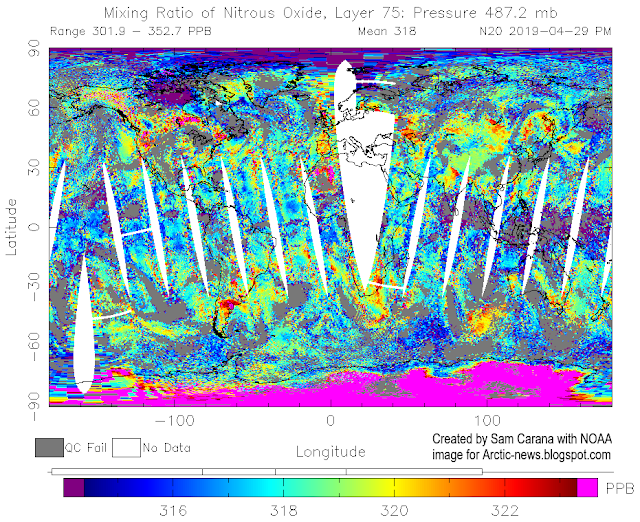 Depletion of the Ozone Layer

In addition to being a potent greenhouse gas, nitrous oxide is also an ozone depleting substance (ODS). As the left panel of the image below shows, growth in the levels of chlorofluorocarbons (CFCs) has slowed over the years, yet their impact will continue for a long time, given their long atmospheric lifetime (55 years for CFC-11 and 140 years for CFC-12). Since nitrous oxide levels continue to increase in the atmosphere, while the impact of CFC-11 and CFC-12 is slowly decreasing over time, the impact (as an ODS) of nitrous oxide has relatively grown, as the right panel of the image below shows.

James Anderson, co-recipient of the 1995 Nobel Prize in chemistry for his work on ozone depletion, said in 2018 that "we have five years to save ourselves from climate change".

In conclusion, while it's important to reduce emissions of all greenhouse gases, reducing emissions of methane and nitrous oxide is particularly important. To both reduce polluting emissions and to remove greenhouse gases from the atmosphere and oceans, the Climate Plan recommends feebates as depicted in the image below. As the image also mentions, further lines of action will be needed to avoid a rapid rise in temperature.

Meanwhile, Arctic sea ice reached a new record low for April, as illustrated by the NSIDC image below. 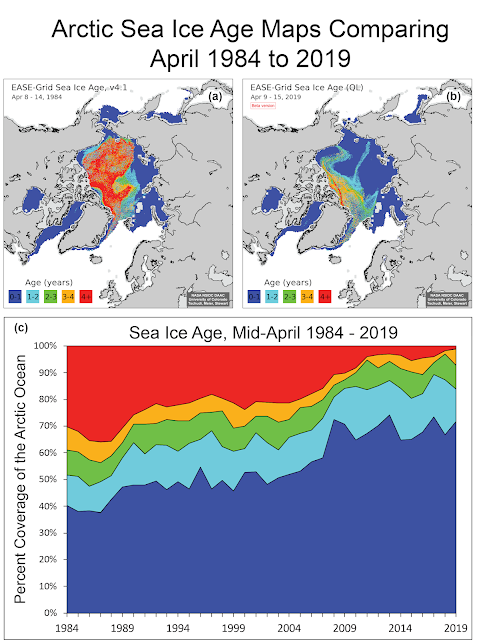 In the video below, Guy McPherson describes what threatens to eventuate soon. This is an edit of the April 22, 2019, video in which Guy McPherson was interviewed by Peter B. Collins for the community television station in Marin County, California.


In the video below, Guy McPherson gives a presentation at the Center for Spiritual Living, in Chico, April 28, 2019.

• We Have Five Years To Save Ourselves From Climate Change, Harvard Scientist Says - James Anderson (January 15, 2018)
https://www.forbes.com/sites/jeffmcmahon/2018/01/15/carbon-pollution-has-shoved-the-climate-backward-at-least-12-million-years-harvard-scientist-says/