High Temperatures over the Arctic 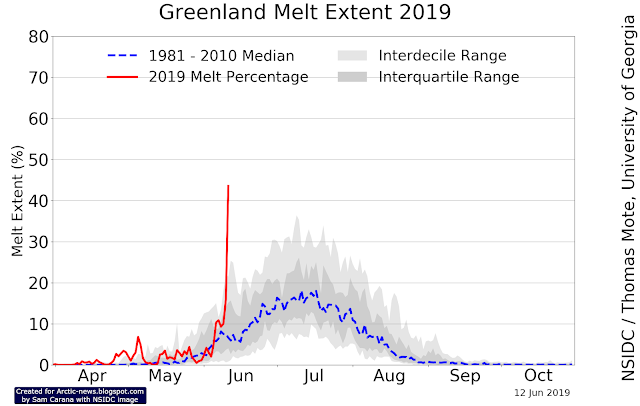 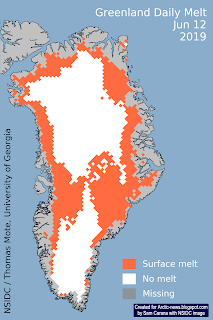 The surface melt map that day (on the right) shows many coastal areas for which data are missing, as indicated by the grey color.

As the June 13, 2019, NASA Worldview satellite image (underneath, right) shows, snow and ice in many coastal areas has melted away.

Four nullschool images are added below. The first one shows air temperatures over Greenland as high as 22.7°C or 72.9°F on June 13, 2019, at 1000 mb. Also note the high temperatures visible over East Siberia and the East Siberian Arctic Shelf (ESAS). 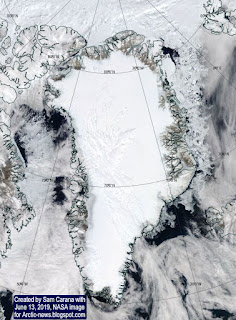 The third nullschool image shows that temperatures as high as 30.5°C or 86.8°F are forecast for June 19, 2019, near Tiksi, which is on the coast of Siberia where the Lena River flows into the Laptev Sea and the Arctic Ocean.

What causes this? As the Arctic is heating up faster than the rest of the world, the path of the jet stream is changing. On June 19, 2019, the jet stream is forecast to move from Siberia to the Laptev Sea at speeds as high as 192 km/h or 119 mph.

The satellite image shows smoke from fires getting pushed by strong winds over the Laptev Sea on June 16, 2019. Smoke settling on ice makes it darker, further speeding up the melting.